It’s been hot. How hot? Usually I do laundry when I run out of underwear. Yesterday I did laundry because I’d run out of tank tops and muscle Ts. There were only two regular Ts on the line, and no long pants. That hot. 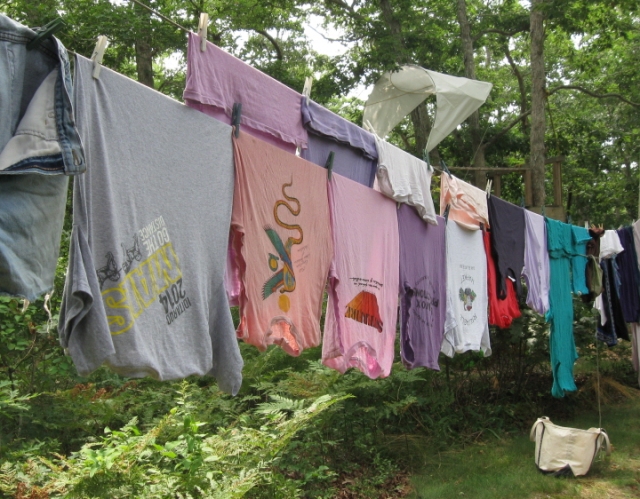 A couple of hours after I hung the wash out, a few drops fell out of the sky. I was proofreading out on the deck, but I wasn’t fooled. I didn’t come in and neither did my laundry. The rain stopped.

Later in the afternoon, the sky got dark, and the trees thrashed back and forth. I was fooled that time, but my clothes were all dry, folded, and put away. Once again, only a few drops fell out of the sky.

Overnight it did rain, not much, but some. And the heat broke. Whew.

Susanna edits for a living, writes to survive, and has been preoccupied with electoral politics since 2016. She just started a blog about her vintage T-shirt collection: "The T-Shirt Chronicles." Her other blogs include "From the Seasonally Occupied Territories," about being a year-round resident of Martha's Vineyard, and "Write Through It," about writing, editing, and how to keep going.
View all posts by Susanna J. Sturgis →
This entry was posted in home and tagged Alaskan malamutes, feminism, laundry, Reliable Market, T-shirts, tomatoes, Washington DC. Bookmark the permalink.