Long time ago, like about 1988, I had this idea: build a Martha’s Vineyard theme park in Falmouth. People could loll on virtual beaches, buy picture postcards and Black Dog T-shirts, and thrill to a hair-raising simulated moped ride on twisty island roadways, all without the expense and hassle of crossing Vineyard Sound. My modest proposal to this effect was published in both papers; the Vineyard Gazette even ran it as an op-ed with a cool carnival graphic.

At that point I was too newbie clueless to realize two things: (1) This would not make people in Falmouth happy at all, and (2) Martha’s Vineyard was a theme park already, or well on its way to becoming one.

I have lived in Martha’s Vineyard: The Theme Park long enough to know that though most visitors voluntarily fall for the illusion — for the $$$ they’re spending, it better meet all their expectations, so they convince themselves that it does — backstage at the theme park is most definitely Real Life. As anyone who’s ever been involved with theater or filmmaking knows, creating and sustaining an illusion is hard work. It also generates its own thrills, chills, and bouts of hysterical laughter, most of which go unnoticed by the visitors, who understandably think that the theme park is all about them. This gives rise to the perennial question: “What do you people do in the winter?”

We tend to finesse this question because (1) it takes too long to explain, and (2) the askers don’t really want to know. Most visitors, like most theatergoers, don’t want to know too much about what it costs to sustain the illusion that they revel in every year. Besides, it’s our Real Life, not theirs. 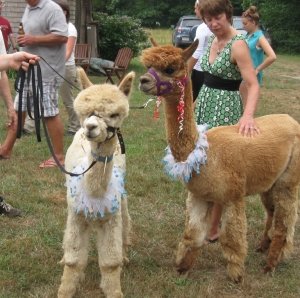 These guys were guests at the same party. No, it was not at the alpaca farm. Yes, there is a connection between the alpaca farm and theme park agriculture.

So yesterday afternoon at a wonderful party a friend and I got onto the subject of theme parkery. An ever-increasing number of year-round residents seem to have fallen for the theme park illusion, we noted, especially when it comes to agriculture. They rhapsodize about island-grown this, that, and the other thing without taking note of some key numbers: 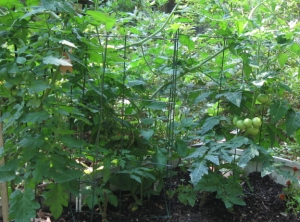 My dinghy garden is not a commercial endeavor. Woman does not live by tomatoes alone . . .

As a commercial endeavor “island-grown” isn’t sustainable without a variety of subsidies, including agricultural development restrictions; people willing and able to work for wages too low to pay island rents, never mind buy a house; people willing and able to pay more, often a lot more, for local produce and meat. Last month the island’s community-supported agriculture (CSA) program was saved when three wealthy summer residents funded the purchase of Thimble Farm by the Island-Grown Initiative, which had been trying unsuccessfully to raise the $2.5 million asking price for the 37-acre farm. (For details, see “Big Donors to Fund Island Grown Initiative.”)

So my friend and I were brainstorming ways to make island agriculture sustainable, and (under the influence of beer, chocolate cupcakes, fresh pineapple, and other wondrous goodies) we came up with a Brilliant Idea. Here it is, uncopyrighted and ready to be implemented by — who? You?

Is there another way to make “island-grown” sustainable? I dunno. Stake us to a six-pack and let’s see what we come up with.

Susanna edits for a living, writes to survive, and has been preoccupied with electoral politics since 2016. She just started a blog about her vintage T-shirt collection: "The T-Shirt Chronicles." Her other blogs include "From the Seasonally Occupied Territories," about being a year-round resident of Martha's Vineyard, and "Write Through It," about writing, editing, and how to keep going.
View all posts by Susanna J. Sturgis →
This entry was posted in Martha's Vineyard, musing, tourism and tagged casinos, garden, island economics, island grown, theme parkery. Bookmark the permalink.