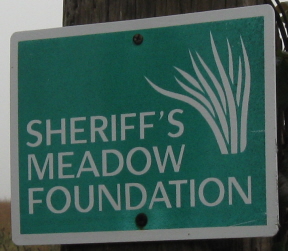 As far as slants go, the Leaning Tower of Pisa has nothing on Nelson Sigelman’s coverage of the Sheriff’s Meadow Foundation’s suit against Ben Ramsey and Nisa Counter. The latest installment was posted yesterday on the Martha’s Vineyard Times website. It concerns a settlement conference that took place almost a month ago before Massachusetts Land Court associate justice Alexander Sands. For a more timely account of what went on at the conference, see my “It Ain’t Over Yet,” which was posted here on October 9.

If I could correct the slant on the MVTimes website, I would, but I’m still blocked from posting comments there. So I’m doing it here. Feel free to forward the link to Mr. Sigelman, SMF, and anyone else who might be interested.

What the Times says: “A lawyer for the Sheriff’s Meadow Foundation (SMF) told a Massachusetts Land Court judge the conservation organization would not participate in mediation with an Island couple to settle a lawsuit over a disputed piece of property, because there was no certainty the discussions would remain private and not be used to fuel Internet critics.”

What it doesn’t say: For nearly a year, Ben and Nisa tried to get SMF to resolve the dispute through negotiation or formal mediation. During that period, only their closest friends and relatives knew what was going on. In July of this year, SMF brought suit against them in land court. Then and only then did they start talking publicly about the case. The lawyer referred to — Diane Tillotson of the Boston firm Hemenway & Barnes LLP — knows this. She also knows that Judge Sands directed both parties not to speak to the press. One wonders how Mr. Sigelman found out what Ms. Tillotson told Judge Sands.

What the Times says: “Sheriff’s Meadow withdrew an offer to pay husband and wife Ben Ramsey and Nisa Counter $10,000 for land the Island couple bought for $9,000 in the Quenames section of Chilmark. The conservation organization says the lot Ramsey/Counter bought is part of property it owns.”

What it doesn’t say: Before Ben and Nisa bought the land from Ben’s aunt, they went to considerable trouble and expense to verify that this parcel was not part of the so-called Freeman Hancock woodlot, which was donated to SMF in 1973. When land has been in one family for many decades — Hancock ownership in this area goes back to the early nineteenth century — boundary lines get fuzzy and transfers go unrecorded. So there are plenty of clouded titles. Alone among the island’s conservation organizations, SMF has been willing to accept donations of land with clouded titles. Still it was somewhat surprising when, at the first court date in late August, SMF’s lawyers couldn’t locate the disputed parcel on a map.

What the Times says: “A land court judge has ordered all parties not to speak publicly about a case that generated sharp online attacks against the Island’s largest conservation organization, its officers, and lawyer Ron Rappaport of Edgartown.”

They could have put it this way: “A land court judge has ordered all parties not to speak publicly about a case that has generated one-sided, factually distorted coverage by the Martha’s Vineyard Times.“

What the Times says: “The settlement would have allowed the couple to walk away without a loss on the purchase price and spare Sheriff’s Meadow significant legal fees. SMF yanked the offer after details of private discussions appeared on a website highly critical of the nonprofit, according to court documents filed in the case.”

Are they kidding???: SMF’s offer would have allowed the couple to walk away from their dream of building a house and raising a family on the land. Sorry, I find the offer insulting and Mr. Sigelman’s account of it inexplicable. And — Earth to Sheriff’s Meadow! Earth to Sheriff’s Meadow! — SMF can spare itself “significant legal fees” by agreeing to mediation and/or dropping the suit. Since these legal fees are flowing in the direction of Ms. Tillotson and her firm, one can’t help wondering why Ms. Tillotson is really so dead set against mediation. 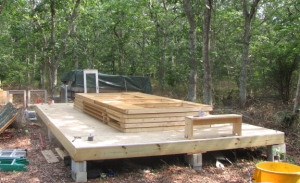 Oh yeah, and about that caption: Under a photo of the carpenter’s tent that Ben Ramsey erected on the property, the caption reads: “The couple received a tent permit and erected a shed on the property at the heart of the dispute. The Chilmark zoning officer told them to take it down.” For the record, Ben explained to Chilmark town officials what he was planning to put up on the property. The board of health issued a tent permit — a permit for a temporary structure that would expire at the end of October. Apparently there was some misunderstanding about construction materials: can a tent be made of wood, or does it have to be canvas? The Times has been trying hard to make it look as if Ben were trying to pull a fast one on the town. Trust me, he wasn’t.

Interestingly enough, it was after I posted a comment to the MVTimes website that contained a link to photos of Ben dismantling the tent that I was barred from posting new comments to the site. Shortly after that, all my earlier comments disappeared. The photos proved beyond a shadow of a doubt that the structure was temporary. Can’t let readers see that, can we?

Speaking of which — I’m not displeased to note that toward the end of his story Mr. Sigelman quoted and paraphrased at some length from this blog, all properly credited, of course. (They even spelled my name right.) I’m less than thrilled that he didn’t call to verify that the info I posted nearly a month ago was still true — but he probably figured that if he had, I’d ask why I’m banned from posting comments on the MVTimes website. He got that right.

Ms. Tillotson seems to be particularly distressed by blogs and social media. She doesn’t understand how they work. Perhaps she doesn’t realize that this particular blog and the Youth Lots vs. Tax Breaks page on Facebook aren’t the problem: we’re a response to the problem. The problem is one of SMF’s own creation. If SMF were acting honorably, what would there be to criticize? If SMF were acting honorably, it wouldn’t have had to engage Ms. Tillotson to represent it in court.

Nisa Counter and Ben Ramsey are acting honorably. We who’ve been blogging, posting comments, writing letters, and making phone calls in their behalf are doing it on our own time, because we believe it’s the right thing to do.

Susanna edits for a living, writes to survive, and has been preoccupied with electoral politics since 2016. She just started a blog about her vintage T-shirt collection: "The T-Shirt Chronicles." Her other blogs include "From the Seasonally Occupied Territories," about being a year-round resident of Martha's Vineyard, and "Write Through It," about writing, editing, and how to keep going.
View all posts by Susanna J. Sturgis →
This entry was posted in Martha's Vineyard and tagged Ben Ramsey, Chilmark, Land Court, Martha's Vineyard Times, Nisa Counter, Sheriff's Meadow Foundation. Bookmark the permalink.