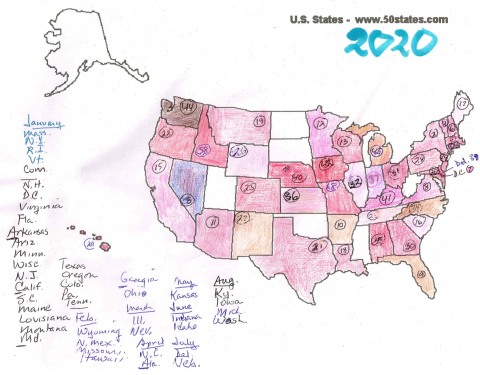 License plate reports seem to be getting later and later. I aim for the first of the following month, and usually make it within a few days, but not with the July report (August 12), and August’s is even later. September 1 was primary election day in Massachusetts, I worked at the polls in my town from 7 a.m. to noon, and the election went swimmingly from my point of view: I volunteered for Senator Ed Markey in his fight for renomination against challenger Rep. Joe Kennedy, and he won handily 55% to 46.5%.

I could blame this late report on that, combined with a demanding copyediting job that I’m running behind on thanks to various political activities, but that’s not it. It’s late because I’ve been feeling sludgy about writing in general since the Covid-19 shutdowns started in mid-March. Now working on breaking up the sludge and writing regularly again . . .

So back to the report: August was quite a good month in the license plate game. Washington state and Michigan finally showed up, along with Kentucky and Iowa. So the YTD tally stands at 44. Still AWOL are Alaska, Utah, Oklahoma, Mississippi, West Virginia, and both Dakotas. Haven’t seen any of them so far in September, but a third of the month still remains.

Susanna edits for a living, writes to survive, and has been preoccupied with electoral politics since 2016. She just started a blog about her vintage T-shirt collection: "The T-Shirt Chronicles." Her other blogs include "From the Seasonally Occupied Territories," about being a year-round resident of Martha's Vineyard, and "Write Through It," about writing, editing, and how to keep going.
View all posts by Susanna J. Sturgis →
This entry was posted in license plates, public life, writing and tagged license plates, politics, writing. Bookmark the permalink.