Life in the Time of COVID-19

Yesterday I attended what will probably be my last meeting for a while. It was the meeting of the Vineyard Transit Authority (VTA) advisory board; I was there to make a presentation on behalf of the Coalition to Restore Vineyard Transportation, of which I’m a part.

By the end of the day Vineyard schools had closed for two weeks. The West Tisbury library had already cancelled all programming through April 2; now it was closing too, by order of the selectboard (a neologism that’s coming into wider use to get around the awkwardness of “board of selectmen”). 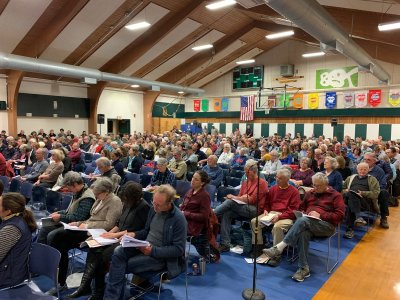 Town meeting season, fast approaching, has been unsettled. Tisbury’s annual town meeting (ATM), at March 31 the first on the docket, has been postponed but not yet rescheduled. The next wave of ATMs — West Tisbury, Oak Bluffs, and Edgartown — is scheduled for April 14. No word yet on them, or on the town elections taking place that same week. The candidate forums sponsored by the League of Women Voters are off (most of them are held at town libraries), as is West Tisbury’s pre-ATM info session, which I was looking forward to. [UPDATE: As of March 19, the WT ATM has been rescheduled for May 12 and the town election is ON for April 16, but the hours have been cut to 11 a.m. to 7 p.m.]

This past Tuesday, the officers of the MV Dems (formally the Democratic Council of Martha’s Vineyard, of which I’m the secretary) decided to cancel our monthly meeting, which is where I would be right now if it were happening. At the time we were a little tentative: Should we or shouldn’t we? By the end of the week it was a no-brainer. By then the state Democratic Party had suspended all town caucuses, at which delegates are elected to the state convention at the end of May.

In deciding to cancel the MV Dems meeting, one factor for me was that we meet at the Howes House, home of the Up-Island Council on Aging, where events aimed at “seniors” take place daily. Most reliable reports and commentaries on the novel coronavirus, aka COVID-19, say that older people and those with compromised immune systems are at greater risk of contracting the disease and are likely to have a higher mortality rate, especially if they can’t get access to treatment.

At some point it dawned on me that I was one of these people said to be at greater risk. I’m 68. However, I’m also in good health. I’m far less concerned about getting seriously sick myself than about the threat to those who are older and/or less sturdy than I am. I’ve read up on the importance of “flattening the curve” of the pandemic’s spread and can now explain it fairly concisely: slowing the spread of the disease will mean that hospitals won’t be overloaded beyond their capacity (which is what has happened in Italy) and that those who need treatment will be more likely to get it.

“Flatten the curve” made visual. If the spread of the disease can be slowed, treatment is more likely to be available to everyone who needs it.

At the same time, the measures being taken to accomplish this are drastic by the usual standards. They’re causing drastic dislocations in many people’s lives, including the lives of the many people who were already living close to the edge financially, who won’t be compensated for lost jobs or lost work hours, who have little or no access to the health care they’ll need if they or someone close to them gets sick. I can barely imagine the fear, anxiety, and/or anger of those who have no idea how they’re going to get through this.

I’m one of the very lucky ones. So far, the preventive measures implemented to flatten the curve are inconveniences at most. I’ve been working from home full-time for more than 20 years. I have work, I have savings, I’m single, I live by myself, I don’t have kids, I don’t depend on public transportation . . . As other freelance editors have noted, we’ve already been practicing “social distancing” as a way of life for some time now. Maybe this is why I haven’t been remotely tempted to stock up on hand sanitizer, or toilet paper either.

However, I’m only one or two degrees of separation from those whose lives are being disrupted in bigger ways. A production editor (PE) at a major New York publishing house emailed me yesterday that his building would be closed all next week (and possibly longer), he and all his colleagues would be working from home, and the proofs I was expecting next week would arrive straight from the compositor. If the building is still closed when it comes time for me to return the completed job, he’ll let me know what to do.

Meanwhile on Martha’s Vineyard, shoppers are having some trouble finding what they need, especially bread and milk, but resupply is coming through from off-island. Some report that the grocery shelves look like August. At Reliable on Wednesday, I found everything I was looking for except jalapeños and mushrooms, and I got both of them at up-island Cronig’s. BTW, up-island Cronig’s is reportedly closing as of this morning in order to help keep down-island Cronig’s fully stocked and staffed.

There have been reports that the grocery store parking lots, like the shelves, also look like August: lots of out-of-state plates, of which the ones from New York (as usual) arouse the most animosity. This has spawned a resurgence of the island’s equivalent of xenophobia, which blames every bad thing that’s happened in the last three (four, six . . .) decades on summer people. Off-islanders flocked to the Vineyard in the wake of 9/11, maybe in the belief that the island was a refuge from the dangers and stresses of the “real world” — you know, the kind of halcyon, carefree place you go on vacation. (I was not aware of this until they started emigrating a few years later, having realized, I hope, that Martha’s Vineyard is part of the real world.)

Someone even suggested — on Facebook, of course — that these new arrivals should be tested for COVID-19 before they’re allowed to get off the boat. This was stupid on so many levels, most of which were quickly pointed out, not without animosity: (1) The shortage of testing kits is a national disgrace, and even people who think they’ve been exposed can’t get tested. (2) The fact that there has so far been no report of anyone testing positive for COVID-19 on the Vineyard may well be due to the lack of test kits. (3) People come and go from the island all day, every day. They work here, we work there, and there are plenty of other reasons besides work to go back and forth. (4) I spotted license plates from 25 different states in January facrissake.

Fortunately, for the most part, people here do look after one another, and most of us know that if this social-distancing thing goes on for more than two weeks, more people are going to need more help.

What I hope for most of all is that this giant storm cloud hanging above us will turn out to have a silver lining: a deeper understanding that we are all interconnected and that we all benefit when everyone has access to affordable health care, accurate information, and a strong social safety net.

Susanna edits for a living, writes to survive, and has two blogs going on WordPress. "From the Seasonally Occupied Territories" is about being a year-round resident of Martha's Vineyard. "Write Through It" is about writing, editing, and how to keep going. She also manages the blogsite for the Women's Committee of We Stand Together / Estamos Todos Juntos, a civic engagement group on Martha's Vineyard.
View all posts by Susanna J. Sturgis →
This entry was posted in public life, work and tagged community, coronavirus, COVID-19, economics, election 2020, Facebook, health, health care, meetings, money, politics, summer people, VTA. Bookmark the permalink.

6 Responses to Life in the Time of COVID-19