I don’t “celebrate” Veterans Day but I do indeed observe it. I notice. I take note.

Coming of political age during the Vietnam War, I was not favorably disposed to either the military or the U.S. government. In the decades since, my perspective has become more — what? complex? nuanced? Still, it’s more than mildly disconcerting that, thanks to the lawlessness of the Trump administration, the gobsmacking gutlessless of congressional Republicans, and the not-as-outlandish-as-it-should-be idea that Trump might refuse to leave office voluntarily, I’ve sometimes thought “If worse really does come to worst, the military is our only hope.”

Souvenir of my first big demonstration, the Vietnam Moratorium, October 15, 1969

While interned at the Washington Coliseum for sitting on the Capitol steps during the Mayday demonstrations of 1971, I struck up a conversation with a young National Guardsman. He said that if he wasn’t on duty, he’d be “in there with you.” He talked about why he’d joined the Guard: part of it was steady employment that came with educational opportunities that I took for granted because of the family I’d been born into.

In my D.C. days, when I was working at the national HQ of the American Red Cross, my friends and drinking buddies included several vets, including one “lifer” who had served his 20 years, retired in his early 40s, and was now working for USA Today. Having both a pension and a salary to live on struck me as pretty cool — but I couldn’t imagine myself following orders for 20 years in the military.

I started college as an Arabic major with the vague idea of going into the Foreign Service. The antiwar movement was a crash course in U.S. foreign policy.  As a teenage Arabist, I was already very familiar with how British and French imperialism had worked in the Middle East. It wasn’t hard to transfer that knowledge to the French and then the U.S. in Indochina. No way could I envision myself representing the U.S. government abroad, or at home either. It looked like a civilian version of the military: stifle your disagreements and do what you’re told.

Poll after poll tells us that the military is the most trusted institution in the U.S.

Aside: A fascinating survey conducted in October 2018 found that “the top five were the military, Amazon, Google, local police, and colleges and universities. The bottom five were the press, the executive branch, Facebook, political parties, and Congress” (emphasis mine).

Since my antiwar days I’ve often been awed and inspired by the stories of veterans and serving members of the military, but that doesn’t translate into trust for the military as an institution. My wariness stems partly from how support for the military has become a secular religion, and any doubts or questions treated as heresy.

There’s also my acute annoyance with the platitude “If you love your freedom, thank a vet.” Shortly after the 2016 election I wrote “Do We Love Our Freedom?” I noted: “When I consider my freedom, I want to thank Susan B. Anthony, Elizabeth Cady Stanton, and hundreds of suffragists whose names I’ll never know. I want to thank civil rights activists and labor organizers and the ACLU.” Then I asked how much we as a people loved our freedom when we’d “just voted in a guy who admires autocrats and whose idea of freedom seems to be the freedom to fleece, stiff, and exploit.”

All of which has come true and then some in the long months and years since January 20, 2017, but there’s something else: The list of people I have to thank for my freedom, which very much includes defending the Constitution and the rule of law on which our freedoms depend, has grown.

That list includes institutions and individuals I never thought to see there. Seriously. The CIA, which during my political coming of age was notorious for helping engineer the overthrow of duly elected governments? The FBI, once the fiefdom of one J. Edgar Hoover, the outfit that persecuted antiwar activists and civil rights advocates as communists? James Comey, facrissake, the guy whose ill-advised announcement in late October 2016 might have been the straw that broke Hillary Clinton’s chance of becoming president?

Following the progress of the impeachment inquiry, and this past week watching the public hearings, I’ve added many names to my thank-you list: Bill Taylor, West Point graduate, veteran, member of the Foreign Service; Marie Yovanovitch, Foreign Service; Lieutenant Colonel Alexander Vindman, serving officer currently seconded to the National Security Council and working in the White House; Representative Adam Schiff (D-CA), chair of the House Intelligence Committee that is leading the impeachment inquiry . . .

They’re all in positions to do what they’re doing because they made choices that I didn’t make and, in most cases, for decades did jobs that I can’t imagine doing. We on the outside have our roles to play, of course, but for now I stand and salute them for their courage, their intelligence, their ethical clarity, and their service. 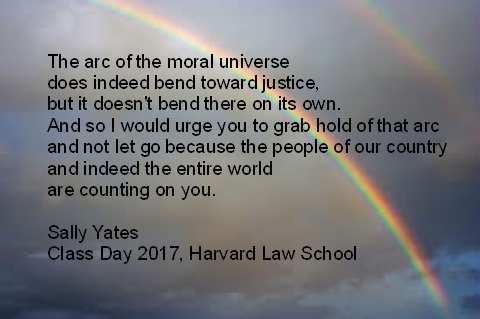 Susanna edits for a living, writes to survive, and has two blogs going on WordPress. "From the Seasonally Occupied Territories" is about being a year-round resident of Martha's Vineyard. "Write Through It" is about writing, editing, and how to keep going. She also manages the blogsite for the Women's Committee of We Stand Together / Estamos Todos Juntos, a civic engagement group on Martha's Vineyard.
View all posts by Susanna J. Sturgis →
This entry was posted in musing, public life and tagged antiwar movement, Democrats, economics, family, military, politics, Veterans Day, war, Washington DC. Bookmark the permalink.