Do We Love Our Freedom?

I’ve written before about my ambivalence about Veterans Day. November 11 was the birthday of my uncle Neville, a gentle soul who came home shell-shocked from World War II, so the family story goes, and never really got his feet under him. As college antiwar activist, I struggled with my hatred of war and what it did to people, and my awe of those who managed to survive it with their humanity intact. 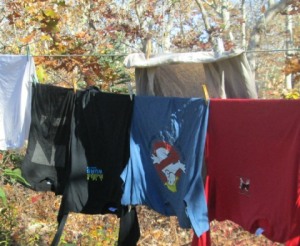 T-shirt close-up. Note blue Trumpbusters T at center and “I’m With Her” arrow on the left.

Last year Veterans Day was so blustery and wet that the parade was cancelled and the ceremony moved indoors. This year was the exact opposite: a crystal-clear and breezy mid-fall day. It was a perfect laundry day, and that is what I did: laundry. Before three in the afternoon, everything had dried on the line and been folded and put away.

The slogan “If you love your freedom, thank a vet” has been a pet peeve of mine for a very long time. When I consider my freedom, I want to thank Susan B. Anthony, Elizabeth Cady Stanton, and hundreds of suffragists whose names I’ll never know. I want to thank civil rights activists and labor organizers and the ACLU.

This year, though, I’m looking more critically at that slogan. I’m looking harder than usual at the first part: If you love your freedom . .

Do we? Really? The country just voted in a guy who admires autocrats and whose idea of freedom seems to be the freedom to fleece, stiff, and exploit.

Not my idea of freedom.

It seems many of this guy’s followers celebrate the freedom to insult and push aside people they don’t like, people they disagree with, people in most cases they know very little about. This may not be what they think they’re celebrating, but the evidence was out there before they went to the polls.

Not my idea of freedom either. Not a freedom worth fighting and dying for. I think many of these people will be surprised if they actually get what they voted for. They’ll probably be angry when they don’t get what they think they were voting for.

Everyone’s the hero of their own story, so the saying goes. Trouble is, our stories overlap, and the hero of your story may be the villain in mine, or at least a frustrating obstruction to progress.

Some people seem to think that their freedom trumps (sorry!) everyone else’s, and that when their freedom to say whatever hateful thing pops into their head is impinged, the republic is on the verge of collapse.

Actually, no — your freedom is not being impinged. Someone may be calling you on your foul language or your foul ideas, but this is not impingement, or censorship either. You have the right to say any damn thing, and I have the right to respond to it.

Do we love our freedom? I think freedom makes many of us very uncomfortable. We’d rather be told what to do than have to make up our own minds. Other people exercising their freedom in our vicinity often freaks us out.

What I’m thinking is that if we love our freedom, we’re going to have to think about freedom means, how the freedoms of diverse individuals can coexist and even support each other. Most of all, we’ve got to give freedom some exercise. Otherwise it will wither and die, and the whole U.S. military won’t be able to save it.

Short version: If you love your freedom, use it. Freedom dies for lack of practice. Thank the vets for their service, but your freedom and mine is mostly up to us civilians.

Susanna edits for a living, writes to survive, and has been preoccupied with electoral politics since 2016. She just started a blog about her vintage T-shirt collection: "The T-Shirt Chronicles." Her other blogs include "From the Seasonally Occupied Territories," about being a year-round resident of Martha's Vineyard, and "Write Through It," about writing, editing, and how to keep going.
View all posts by Susanna J. Sturgis →
This entry was posted in musing, public life and tagged election 2016, freedom, laundry, Veterans Day. Bookmark the permalink.

11 Responses to Do We Love Our Freedom?