U is for Unsustainable #AtoZChallenge

Warning: This is a rant. T/read cautiously.

“Sustainable” is all the rage around here. Support sustainable agriculture.  Buy island-grown. Reduce your carbon footprint.

Recycling is practically a religion. Ditto “rescue” — of animals and the environment. (I was about to add “not primarily of people,” but with the opioid epidemic that’s changed somewhat.)

“Nitrogen loading” comes trippingly off the tongues of people whose technical expertise is even less than mine. It’s about ensuring that the effluent from septic systems and lawns doesn’t mess with the island’s sole-source aquifer or the shellfishery in island waters. 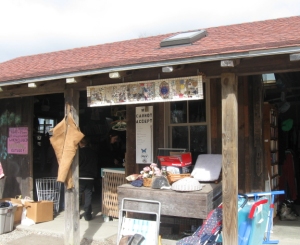 The Dumptique, aka the recycling shed at the West Tisbury dump, where quite a few of us do at least some of our “shopping”

Living in D.C. I rarely thought about garbage, sewage, or where tap water came from. Yes, I was aware of garbage scows in the Anacostia River, but trash got picked up once or twice a week and that was it.

When I arrived on the Vineyard, trash was a major topic of discussion. The dumps in the six island towns were nearing capacity, so the question was what to do with all the trash we were generating.

Eventually the decision was made to export it to the SEMASS facility in Rochester, Mass., and to promote recycling as a way of reducing the cost. Our town dumps eventually became transfer stations, but most of us still call them dumps.

All of this raised my consciousness and influenced my worldview in a mostly good way. Living on an island, it’s hard to avoid being at least dimly aware of where things come from and where they go. Knowing what I know now, could I live in D.C. or any other big city again? Waste disposal and clean water for a year-round population of less than 20,000 (100,000-plus in summer) is daunting enough; what about waste disposal and clean water for a metro area of literally millions?

Yeah, I almost certainly could. Denial isn’t just a river in Egypt. It’s a survival strategy, and it works. When something’s too unsettling to live with, we repress, forget, or ignore it.

Along with my ignorance of trash, I brought to the Vineyard a penchant for observing what was going on around me. Growing up in a family where much wasn’t said and much of what was said couldn’t be taken at face value, this was a necessary survival skill. Feminism honed it. Silences, I learned, were important clues. What wasn’t being said? Who wasn’t at the table?

Reading Marxist economics in college didn’t turn me into a Marxist, but it did make me realize that popular political discourse in the U.S. tended to slight economics. Fifteen months living in the U.K. in the mid-1970s confirmed this: the economic underpinnings of political events were front and center in both conversation and commentary. And class was and still is the snarly knot I’m trying to untangle.

The Vineyard — some of it, anyway — prides itself on its community-mindedness and civic engagement. Early on, around 1988, I learned that there was much more to it than that. Lesson #1 came at a West Tisbury annual town meeting (ATM). You’ve probably heard people claim that New England town meeting is the purest form of democracy, right? I’ve claimed as much myself. At the 1988 (IIRC) West Tisbury ATM, I identified Snowmobiles in Christiantown Syndrome. Snowmobiles in Christiantown took up something like 40 minutes of floor debate, but the multi-million-dollar school budget was discussed and voted on in less than 10.

Check this out. I’m not kidding. It explains a lot about the dismal level of political and other discourse on social media. Town meeting discourages the worst excesses in a way that social media does not: Townsfolk are generally reluctant to say publicly anything critical about anyone they’re likely to run into the next day, or anyone they’re related to or know someone who’s related to. (In private you may get an earful, however.)

Lesson #2 arose from the anti-moped crusade, which emerged in 1988, went into remission for a long time, then was reborn with vigor in 2016, when the attention of the politically minded was absorbed by arguably more important things.

Armed with these two lessons, you’ll begin to understand why most people didn’t begin waking up to the housing crisis till 10 or 15 years ago, though the housing situation was bad enough when I got here. We normalized it, we made do, until suddenly (not!) it was so bad  that a whole generation of young people was moving off-island because island jobs didn’t pay nearly enough to pay for island housing.

To this day most people I know don’t want to think too hard about this. Is it a failure of language, a failure of observation, or a failure of nerve? “Denial” springs to mind, but that’s a tautology. Denial doesn’t spring out of nowhere. Denial has causes, and powerful incentives to keep it in place.

To venture a huge generalization — what makes the Vineyard as we know it and like to think of it unsustainable is an unwillingness to grapple with Economics 101. Housing is unaffordable because the price of land went through the roof some time ago; the price of land went through the roof because it was bid up and up and up by the second-home market; and most of us working Vineyarders have at some point owed most or all of our livelihood, directly or indirectly, to the second-home market.

Raise the issue however obliquely and someone will smack you down: “We should be grateful to the summer people because otherwise we couldn’t live here.”

So far I haven’t grappled with this in my fiction. Some of my characters make occasional snarky comments about summer people, but that’s about it. They make do, and help others make do, and they do it all pretty well.

A phrase comes to mind from a story that’s very famous in science fiction circles: “The Women Men Don’t See,” by James Tiptree Jr. (aka Alice Sheldon). One of the women says to a clueless man that women “live by ones and twos in the chinks of your world-machine.'”

Vineyarders live in rather larger groups in the chinks of an island that looks pastoral and familiar but over which we have very little control.

My plan is to take this on in novel #3, working title The Squatters’ Speakeasy. This, you’ve probably noticed, is the URL of this blog. It’s been on my mind for a long time. The opening scene came to me around 2003, but I had no idea what to do with it. Five or six years ago I gave it a try, but it sprawled and sprawled and wouldn’t coalesce — a failure of the imagination, temporary, I hope. It did, however, spin off Wolfie, which is now in the home stretch. So we’ll see.

Susanna edits for a living, writes to survive, and has two blogs going on WordPress. "From the Seasonally Occupied Territories" is about being a year-round resident of Martha's Vineyard. "Write Through It" is about writing, editing, and how to keep going. She also manages the blogsite for the Women's Committee of We Stand Together / Estamos Todos Juntos, a civic engagement group on Martha's Vineyard.
View all posts by Susanna J. Sturgis →
This entry was posted in Martha's Vineyard, public life, writing and tagged character of the island, class, Facebook, feminism, island economics, mopeds, politics, Squatters' Speakeasy, town meeting. Bookmark the permalink.

5 Responses to U is for Unsustainable #AtoZChallenge