M is for Mud #AtoZChallenge

Mud season generally comes round in early spring, when thawing earth and April showers turn fields, dirt roads, and back yards into quagmires. (Hmm. Maybe Q is for Quagmire? I won’t know till I get there.) 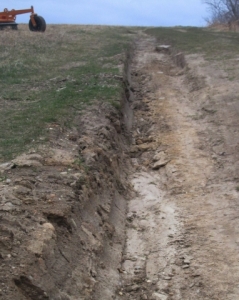 Big rut at Misty Meadows, after three months of runoff

Except this year, when the long, hard freeze that ended 2017 and began 2018 gave way to a serious January thaw. Along the edge of the field at Misty Meadows, where Trav and I walk almost daily, the mud was so deep and gooey it almost trapped a tractor. The several-inch crevasse the big wheel left is still there, and will be until a vehicle of similar heft comes to grade it.

The four nor’easters of March saturated the ground even further, especially the first one. That one also felled plenty of huge trees, often not by knocking them down but by pulling them up by the roots: the thawing ground couldn’t hold them.

People gush about how beautiful Martha’s Vineyard is, how lucky you are to live there.

Mud is not beautiful.

You slip in the mud.

You get stuck in the mud.

Mud spatters you all over when you’re trying to look cool.

So in May 1994, when I spotted a short piece in The New Yorker publicizing an upcoming reading by poet-writer-activist Grace Paley, I fell in love.

Paley was asked if she would write about the situation in South Africa. She might have a character comment on it, she said, but “if your feet aren’t in the mud of a place, you’d better watch where your mouth is.”

The previous year, President Bill Clinton and his family had taken the first of several summer vacations on Martha’s Vineyard. The national press corps had spent their many, many idle moments searching the Vineyard for “local color.” They got it so consistently wrong that in May 1994 I was still fuming.

Grace Paley nailed the reason why — and at the same time, in a most Paleyesque way, issued a challenge: Where were my feet? If not me, who? Paley’s words became my touchstone: Even if your feet are in the mud of a place, you’d better watch where your mouth is.

Into the umpteenth draft of The Mud of the Place, I realized that there wasn’t all that much literal mud in the story, so I had to put more in. This wasn’t all that hard. In chapter 2, reporter Leslie Benaron is on her way to cover a house fire:

Reporter’s notebook clutched in one hand, rollerball pen trapped in its spiral binding, Leslie picked her way up the muddy track. It wasn’t enough that mud season was still upon them the third week of April; runoff from the hoses was gouging deeper and deeper tracks on either side of the slippery median mound. And was Leslie wearing her duck shoes? She was not. Leslie had just come from a dinner date, a precious opportunity to wear her fine black Italian leather boots, the ones that shaped her ankle and lower calf in graceful curves that approached—she hoped—elegance. The ones whose soles were so thin that the cold clamminess of the mud chilled the bottoms of her stocking feet. If she was really lucky, the soles would stay attached to the uppers till she got home.

There’s no literal mud in Wolfie, because it takes place in the fall, when the ground is well on its way to freezing. Of figurative mud, well, of course, there’s plenty. But I’m still trying to live up to Grace Paley’s warning: “If your feet aren’t in the mud of a place, you better watch where your mouth is.” 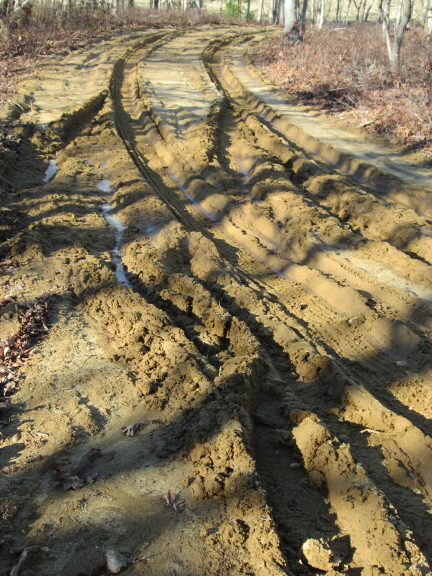 Yaktrax (mine) and pawprints (Travvy’s) in mud

Susanna edits for a living, writes to survive, and has been preoccupied with electoral politics since 2016. She just started a blog about her vintage T-shirt collection: "The T-Shirt Chronicles." Her other blogs include "From the Seasonally Occupied Territories," about being a year-round resident of Martha's Vineyard, and "Write Through It," about writing, editing, and how to keep going.
View all posts by Susanna J. Sturgis →
This entry was posted in Martha's Vineyard, outdoors, writing and tagged journalism, Mud of the Place, spring, summer, walking, weather, winter. Bookmark the permalink.

5 Responses to M is for Mud #AtoZChallenge