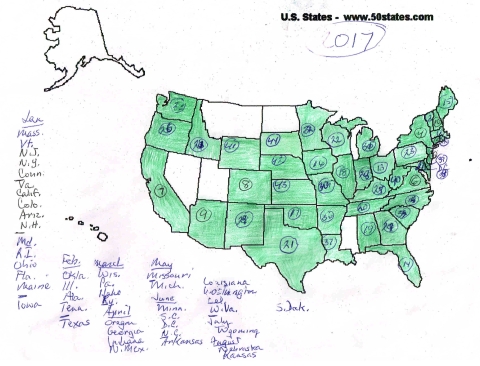 When July ends, I damp my expectations way, way down. Pickin’s are always slim in the last five months of the year, and in a few years they’ve been nonexistent. So spotting Nebraska! and Kansas! in the first week of August was a big wow. Two big wows. Anything was possible!

The following weeks didn’t measure up, in large part because I stayed off the roads as much as possible. The traffic was terrible. Not terrible by urban standards, of course, but our roads aren’t urban roads either. One Saturday Farmers’ Market morning the traffic coming into West Tisbury was backed up on the Edgartown Road almost all the way to the airport. That’s more than two miles, almost two and a half.

Then one afternoon the last week of the month I parked at Ocean Park to do my grocery shopping at Reliable Market. The Reliable lot is very small, so when I can’t squeeze in there I head over to Ocean Park. The four-hour spaces are almost always taken, but if I can grab one of the 15-minute slots, I can always get back to the car in time. An unusual plate caught my eye. I crossed the street to check it out. South Dakota!

Strange but true, while selling books at the Labor Day Artisans Festival, I got into a conversation with a couple who were from, I kid you not, South Dakota. I quickly ascertained that theirs wasn’t the car I spotted on Ocean Park that day. There must have been at least two South Dakota cars on the island at the same time.

Well, I’ve got hopes for the rest of the year. Not high hopes, but hopes. Utah and Nevada are definitely possible, Mississippi and Montana maybe. We’ll see.

Susanna edits for a living, writes to survive, and has been preoccupied with electoral politics since 2016. She just started a blog about her vintage T-shirt collection: "The T-Shirt Chronicles." Her other blogs include "From the Seasonally Occupied Territories," about being a year-round resident of Martha's Vineyard, and "Write Through It," about writing, editing, and how to keep going.
View all posts by Susanna J. Sturgis →
This entry was posted in license plates and tagged Artisans' Fair, Farmers Market, license plates, Reliable Market, summer, traffic. Bookmark the permalink.