I’m more than half Southern on my mother’s side, but I grew up (and have lived most of my life) in Massachusetts, so until pretty recently I was able to think of Confederate statues as mostly a matter of heritage and history.

Next to her writing desk my Richmond-born grandmother had a World War I recruiting poster that depicted an avuncular gray-uniformed General Robert E. Lee and the words “I FOUGHT FOR VIRGINIA. NOW IT’S YOUR TURN.” (The same slogan was used during World War II, inviting civilians to join the Lee Navy Volunteers.)

My grandmother’s middle name before she married was Washington. She was also a descendant of Custises and Lees. My New England born and bred father was a collateral descendant of Robert Gould Shaw, first commander of the 54th Massachusetts, who was killed in action and didn’t live long enough to leave direct descendants. My father, Robert Shaw Sturgis, was named after him.

The Bonnie Blue Flag, the first unofficial flag of the Confederacy

Having both sides of the Civil War in my ancestry seemed a natural state of affairs. As I and my three siblings entered the world, my grandmother, who played piano by ear, gave each of us a song. Mine, of course, was “Oh, Susannah!” Brother Roger’s was “Dixie,” brother John’s was “Maryland, My Maryland” (he was named after Marylander John Hanson, the first person to serve a one-year term as president under the Articles of Confederation), and sister Ellen’s was “The Bonnie Blue Flag.”

My grandmother was almost certainly the source of two LPs I played so incessantly as a kid that I learned most of the songs by heart: Tennessee Ernie Ford Sings Songs of the North and Tennessee Ernie Ford Sings Songs of the South. Both albums were released in 1961, the centenary of the Civil War’s beginning, when I was 10. That’s probably when they came into my family’s home in the Boston suburbs. (They’re both available on CD these days, separately and as a two-CD set.)

Above the mirror in my grandmother’s dining room was a small Confederate battle flag with a rustic wood frame. As the years went by and I learned more about the Civil War and more about Jim Crow, as the antiwar movement brought me into contact with veterans of the civil rights movement, that flag would grow huge in my mind’s eye until it was bigger than the mirror and dominated the wall. Every time I returned to my grandmother’s house — which was pretty often, since she lived less than 10 miles away from my parents — I was startled by how small that flag was.

On Martha’s Vineyard the trappings of the Confederacy are rarely seen, and the few swastikas I’ve seen in the last 30-plus years have all been graffiti. Ugly as they are, swastikas chalked on brick walls don’t have the visceral impact of the Nazi flags carried in Charlottesville. So my belief that the statues were mostly about history and heritage was rarely challenged. When it finally was, it collapsed completely.

Almost none of the monuments were put up right after the Civil War. Some were erected during the civil rights era of the early 1960s, which coincided with the war’s centennial, but the vast majority of monuments date to between 1895 and World War I. They were part of a campaign to paint the Southern cause in the Civil War as just and slavery as a benevolent institution, and their installation came against a backdrop of Jim Crow violence and oppression of African Americans. The monuments were put up as explicit symbols of white supremacy.

Cox also notes that “the group responsible for the majority of these memorials was the United Daughters of the Confederacy (UDC), among the most influential white women’s organizations in the South in the late 1800s and early 1900s,” and to which I believe my grandmother belonged. The World War I recruiting poster by my grandmother’s desk would have come from the tail end of this period. 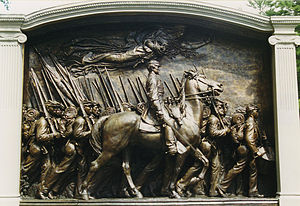 In the wake of Charlottesville, a vigil and a rally were held a week apart on the Vineyard. Both took place at the Civil War monument across from the ferry terminal in Oak Bluffs. The monument is easy to miss, even once you know it’s there. Its surprising history is told in Tom Dunlop’s “Uniting the Divided” on the Martha’s Vineyard Magazine website, but these pieces of it stand out:

Charles Strahan, who raised the funds for the monument, was by then a newspaper editor on the Vineyard. A native of Maryland, he had fought for the Confederacy. The monument honored the Grand Army of the Republic. It was dedicated on August 13, 1891. Are you feeling a little dissonance yet? 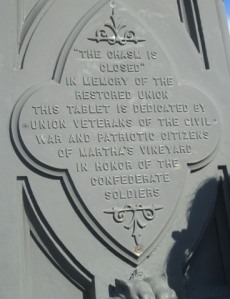 Inscriptions on three sides honored the Union army and its Vineyard combatants. The fourth side was blank until 1925, when an inscription was added, funded by the surviving veterans of the Grand Army of the Republic. This had been Strahan’s hope from the beginning, and he was alive to see it dedicated on September 4, 1925. It reads:

“The chasm is closed.”
In memory of the restored Union this tablet is dedicated by Union veterans of the Civil War and patriotic citizens of Martha’s Vineyard in honor of the Confederate soldiers.

Noting the 34-year gap between the two dedications, and wondering how many Union army veterans were still around in 1925, 60 years after the end of the war, I wonder if there was resistance to the idea of honoring the Confederate soldiers. The chasm between North and South was alive and well in 1925 for those who cared to look; the Great Migration of African Americans from South to North was well under way. I suspect that on some level at least, the chasm was within Charles Strahan himself, a man who had fought for the Confederacy but had lived on Martha’s Vineyard since 1884.

After the passing decades had taken their toll, the monument was restored in the late 1990s and rededicated on August 17, 2001.

At the “rally for unity” last Sunday, there was some talk about the statue, and about that fourth inscription. Was this monument problematic? Should it be taken down? Why would anyone want to honor the Confederate soldiers?

I’m not a big fan of statues, but I like this one. It embodies the complexity and contradictions of both the Civil War and our often dis-United States. It makes me look at history from different angles. It reminds me that my grandmother had Robert E. Lee and the Confederate battle flag in her dining room, and that I still know the words to a bunch of Confederate songs. 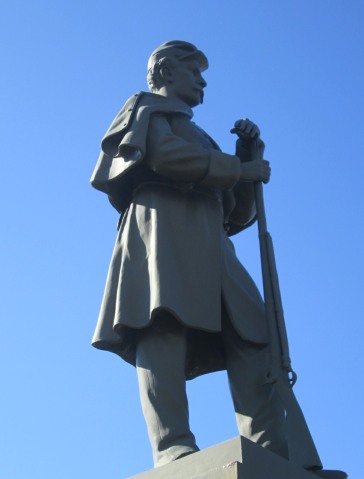 Susanna edits for a living, writes to survive, and has two blogs going on WordPress. "From the Seasonally Occupied Territories" is about being a year-round resident of Martha's Vineyard. "Write Through It" is about writing, editing, and how to keep going. She also manages the blogsite for the Women's Committee of We Stand Together / Estamos Todos Juntos, a civic engagement group on Martha's Vineyard.
View all posts by Susanna J. Sturgis →
This entry was posted in musing, public life and tagged history, politics, resistance, war. Bookmark the permalink.