The Tisbury Street Fair takes place every year on July 8, a date I remember because it was my father’s birthday. From 6:30 to 9:30 p.m. Main Street and Union Street are closed to traffic, shops and nonprofits set up tables along the sidewalks, bands play live music at both ends of the street, and long lines gather at the booths where food is sold.

It’s the sort of event you look forward to when you’re new on the island but then it sort of fades from your psychic map. During the almost five years I lived off Skiff Ave., in the mid-2000s, I sometimes strolled into town to check out the street fair with Rhodry, who was well behaved in crowds and always attracted plenty of admiration. Trav is not at his best in new situations, and besides, we live up the road in West Tisbury.

This year was different. As I blogged last month, I’ve fallen in with Democrats. For years now Cathy Brennan has done an MV Dems table at the Tisbury Street Fair. Usual practice was to focus on election years, when there’s lots of campaign literature to be handed out, but as non-election years go, 2017 is proving pretty unusual, possibly unique, so it was decided that a table might be a good idea. I volunteered to help.

Cathy has the routine down and had the table set up before I showed up. Here we are: 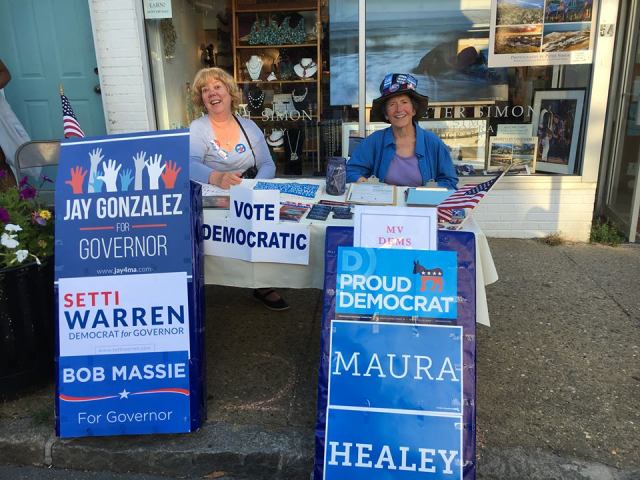 Cathy on the left, me and my hat on the right. Photo by Kim Hilliard.

Jay Gonzalez, Setti Warren, and Bob Massie — the three names on the sign at left — are the three Democratic candidates who’ve declared so for the the 2018 Massachusetts gubernatorial primary. We heard them speak at the Democratic State Convention last month, and Cathy brought home their literature to pass out.

Maura Healey, featured on the sign at right, is our state’s attorney general. She gave a rousing speech at the convention. I’ve now got her bumper sticker on my car. It says

As it happened, she and our state representative, Dylan Fernandes, had been the guest speakers at the MV Dems monthly meeting that morning. They both talked about what they and their offices were doing, at the state house and on the legal front — Healey has been a leader in the legal battle against the Trump administration’s many excesses, and other Democratic state attorneys general across the country have also been on the front lines.

In the days since, several people have told me that they felt more encouraged and energized and inspired after that meeting than they have in months. I get it: I did too, and still do.

The gloom-and-doomery out there is contagious. Social media is a hotbed of generalizations about how screwed up the country is, how stupid Trump supporters are, how clueless and/or corrupt the Democratic Party is. You try to keep your guard up but it gets to you anyway.

So it’s encouraging and energizing and inspiring to listen to elected officials doing important work in the real world, and to be reminded how demanding that work is, and how change doesn’t happen overnight. At the street fair I had conversations with people from an array of states, among them Arizona, Wisconsin, Illinois, and Maine, and people from across Massachusetts. I learned a little more about what’s happening where they live; they learned a little more about year-round Martha’s Vineyard.

One guy noticed the I’M WITH HER button on my hat and said, “I’m still with her.” It made my evening. 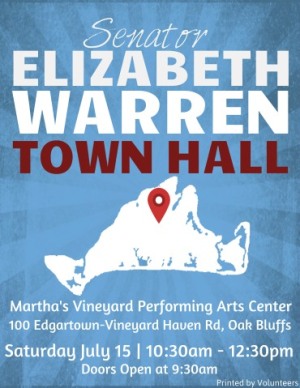 Summer money lures Democratic politicians from all over the country to Martha’s Vineyard for big-ticket fundraisers. The cheapest option is usually $500. The ridiculous cost of campaigning, made worse by the Citizens United decision, makes these big-ticket events inevitable. Those able to afford them wind up with face-to-face access to candidates and officeholders, while the rest of us are little more than faces in a large crowd.

This is not to knock large crowds. I’m planning to be a face in the crowd that turns out this Saturday morning to hear Elizabeth Warren, our senior U.S. senator, at the high school’s Performing Arts Center.

But officeholders like Maura Healey, who speak to relatively small groups and stick around for coffee afterwards, are so refreshing, and effective representation in state legislatures is so important. In Massachusetts a state rep represents on average about 40K people, a state senator about 160K. The house districts in particular are not large, at least not in population.* Elect a real representative and the chances are excellent that you’ll be able to establish a face-to-face connection even if you never contribute to a campaign.

Susanna edits for a living, writes to survive, and has two blogs going on WordPress. "From the Seasonally Occupied Territories" is about being a year-round resident of Martha's Vineyard. "Write Through It" is about writing, editing, and how to keep going. She also manages the blogsite for the Women's Committee of We Stand Together / Estamos Todos Juntos, a civic engagement group on Martha's Vineyard.
View all posts by Susanna J. Sturgis →
This entry was posted in Martha's Vineyard, public life and tagged Democratic Party, Dylan Fernandes, election 2018, Maura Healey, politics, Tisbury. Bookmark the permalink.