Woo woo! June was the best month ever in recent memory for the license plate game: nine new sightings. Consulting maps back to 2011, I find a high of six and a low of three. Nine beats ’em all, and they included some heavy-hitters.

In order: Minnesota, South Carolina, D.C. (which I’m sure I’d seen before but not remarked on), North Carolina, Arkansas, Louisiana, Washington, Delaware, and West Virginia. 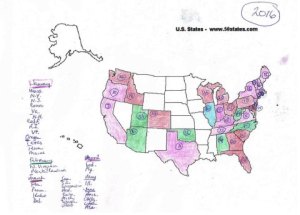 See that stack of states immediately north of Texas? They’re always the hardest to get, but the line just to the east of them isn’t easy either. At this time last year none of them had showed up. When 2016 drew to a close, Arkansas and Louisiana were still AWOL.

But at the end of June 2017, that stack was solid. The only state east of that line that’s still missing is Mississippi.

Hands down the most fun of the new sightings was West Virginia. Late one Saturday afternoon, my friend the writer Cynthia Riggs emailed to say that West Virginia was staying at her B&B, near the center of West Tisbury on the Edgartown Road. I high-tailed it over there as soon as I could, only to learn that West Virginia had just left for supper. I did collect some spinach, mint, and peas from Cynthia’s amazing garden.

The next morning Cynthia called to say she’d just told her guests that they couldn’t leave till I’d seen their license plate. Not wanting to be responsible for anyone’s missing the boat, I dropped everything and high-tailed it over there again. Not only did I spot a West Virginia license plate, I got to spend a delightful hour with the couple who belonged to the car that was sporting it, talking about politics, writing, and Martha’s Vineyard.

It does help to have accomplices in the license plate game. Another friend tells me that she saw North Dakota at Al’s Package Store in Edgartown. By the time I got the word, it would probably have been gone, but boy was I tempted to drive to Edgartown and maybe set up camp at the Triangle to watch vehicles leaving and coming into town. Later a Facebook friend reported that she’d seen North Dakota a few years ago, also in Edgartown. Hmm.

Susanna edits for a living, writes to survive, and has been preoccupied with electoral politics since 2016. She just started a blog about her vintage T-shirt collection: "The T-Shirt Chronicles." Her other blogs include "From the Seasonally Occupied Territories," about being a year-round resident of Martha's Vineyard, and "Write Through It," about writing, editing, and how to keep going.
View all posts by Susanna J. Sturgis →
This entry was posted in license plates and tagged Cynthia Riggs, Edgartown, license plates, West Tisbury. Bookmark the permalink.