After many years as an unenrolled voter who voted Democratic and even occasionally worked for Democratic candidates, on January 30 I finally registered as a Democrat. Two weeks later, almost by accident, I became secretary of the Martha’s Vineyard Democrats, aka the MV Dems, formally the Democratic Council of Martha’s Vineyard. Six weeks after that I became a delegate from my town of West Tisbury to the 2017 Massachusetts Democratic Convention.

The convention took place this past Saturday, June 3, in Worcester. I went. Hold that thought; we’ll get back to it soon.

My rapid ascent was pretty much by default: newbies generally don’t get gigs like those if older hands are interested. In non-election years political parties are a sideshow, and on proudly individualistic (and generally ineffectual) Martha’s Vineyard they’re somewhat distasteful: one is widely thought to be sacrificing one’s integrity if one belongs to a political party or a union because sooner or later one might have to compromise one’s conscience in the interest of getting something done.

My own attitude toward the Democratic Party was, more or less, “Like I have a choice?” As a feminist I’ve been living in a one-party system all my adult life. The same is true for other significant, often overlapping, swaths of the U.S. population. The Democratic Party knows we have nowhere else to go so over the years it mostly pays us attention only when it wants our votes. 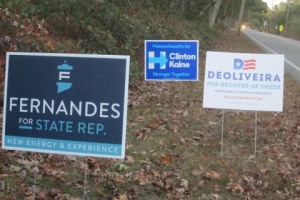 However, having volunteered in a local campaign last year and being one of those people whose opinion of the Democratic Party rose because Hillary Clinton was its candidate for president, I saw that party infrastructure was key to electing Democrats to public office, and that electing Democrats to public office was absolutely key to bringing the country’s current nightmare to a close.

Once I saw the connection, I set out to learn how it works. Party infrastructure is a mechanism whose goal is to get Democrats elected to public office. Compare it to a car: I don’t have to be a mechanic to drive a car from, say, Martha’s Vineyard to Worcester, but I do have to know how to drive. I’d better know the rules of the road well enough to avoid accidents, and be able to read maps and signs well enough to not end up in the wrong place. 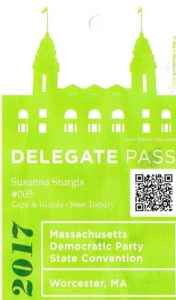 So I went to Worcester primarily to learn. The focus of the 2017 Massachusetts Democratic State Convention was on the party platform, a sprawling document that’s rewritten every four years. By mid-May, after weeks of platform hearings around the commonwealth and much deliberation, the platform committee had produced a draft, which you can find if you’re so inclined on pages 16–26 of the 2017 Call to Convention.

The platform can be amended from the convention floor, but though a first-time convention delegate, I knew there was no way that 3,000+ people could give serious consideration to amendments in the three hours allotted. In my town, 300 people at annual town meeting can spend 20–30 minutes debating a single zoning bylaw. Nuff said for now; more later.

Speaking of my town — the number of convention attendees was roughly the same as West Tisbury’s year-round population. Delegates were seated by state senatorial district. We from the Cape & Islands district could be found at signpost 005.

The convention opened, predictably enough, with speeches, lots of speeches. I got my first look at the three declared Democratic candidates for governor: Jay Gonzalez, Setti Warren, and Bob Massie. (For what it’s worth, I was impressed by Gonzalez and Warren, not so much by Massie.) 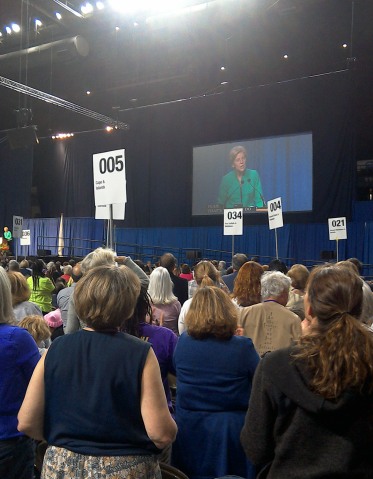 Senator Elizabeth Warren onscreen, and if you look over to the left you can see her in person. 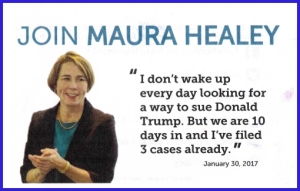 During the best of the speeches –for me these were the ones given by our two senators, Elizabeth Warren and Ed Markey, and by state attorney general Maura Healey, but some of the others were pretty good too  — I felt inspired and motivated: We really can pull together, fight back against the unrolling fiasco that is the current administration, and maybe even take back Congress in 2018!

But under the exhilaration was the somber realization that compelling oratory — speakers inspiring listeners with messages the listeners most wanted to hear — helped get us into the mess we’re in now. Too many people were swept away by cries of “Change! Change! Change!” without thinking too hard about what changes should, could, and would be made, and how, and by whom.

When we got to the platform amendment part of the agenda, it immediately became clear that many of the amendments were being pushed by novice drivers who wanted to throw out both the maps and the rules of the road without first understanding what purpose they served. 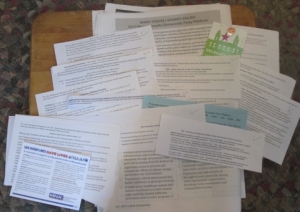 The amendments (most of them anyway) that came down my row.

To bring an amendment to the floor, its supporters had to gather 500 signatures from registered delegates, turn them in by 12 noon, and make copies for all the delegates. This led to a proliferation of slips of paper and a huge mess on the convention floor.

A few of the many amendments that came down my row were clear, concise, and ready for an up-and-down vote. Most of them weren’t. Many of them were sloppily worded, and all too many tried to cram way too much into a single amendment. Example: The proposed amendment to the housing plank contained eight separate bullet points, any one of which could have generated at least 10 minutes of discussion.

The absolute worst was a proposed amendment to the MassDems charter. The charter is like the organization’s constitution: it’s evolved over time, by trial and error, and it’s not to be amended lightly. To continue the car analogy: maybe you don’t need to be a mechanic to mess with the charter, but you’d better have a lot of road miles under your belt. So this amendment was a full single-spaced page long. Apparently believing that increasing the size of an organization makes it more responsive, it proposed increasing the size of the state Democratic committee by 50 percent. (1) The state committee is already the second largest in the country, after California’s. (2) In general, the larger an organization gets, the greater its deadweight and the less responsive it becomes.

It also proposed having the additional 80 members elected on the primary ballot by registered Democrats. What the drafters forgot is that Massachusetts is an open-primary state, which means that many of the people who take the Democratic ballot in primary elections are not registered Democrats. They’re unenrolled. I know this because I did it for decades.

Fortunately, cooler heads prevailed on this one and the amendment was tabled for future discussion. Unfortunately, too many of the sloppily worded amendments were adopted, with little discussion and by acclamation, into the 2017 platform. Fortunately or unfortunately, depending on how you look at it, they will be widely ignored along with most of the rest of the platform.

So what did I learn from all this? The big lesson for me is that the platform hearings that were held around the commonwealth in the months before the convention are important. That’s where platform issues can be raised and even discussed at some length. And any complex amendment should be considered by the platform committee, whose members know the rules of the road and how to read maps — or have time to learn as they go.

The convention wasn’t particularly well run. I didn’t get my badge until Thursday, and if the agenda says the platform discussion is going to start at noon, it shouldn’t start at two thirty. The breakout sessions that were supposed to start at three never happened, which is too bad because they were about practical organizing and could have been genuinely useful, unlike most of the post-noon speeches and most of the amendment process.

Driving home on Interstate 495, I thought that the state committee might be compared to motorists going 40 mph in a 65 mph zone, while the semi-organized opposition were the ones having a wonderful time lane-jumping between other vehicles and probably missing their exits because they didn’t believe in road maps. Will the lane-jumpers wise up before they cause a big crash? Can the slowpokes be induced to speed up? Watch this space . . . 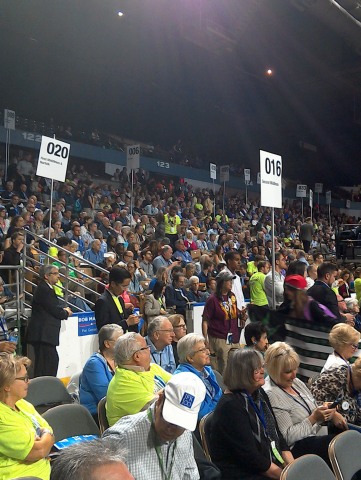 Convention crowd, part of it.

Susanna edits for a living, writes to survive, and has been preoccupied with electoral politics since 2016. She just started a blog about her vintage T-shirt collection: "The T-Shirt Chronicles." Her other blogs include "From the Seasonally Occupied Territories," about being a year-round resident of Martha's Vineyard, and "Write Through It," about writing, editing, and how to keep going.
View all posts by Susanna J. Sturgis →
This entry was posted in public life and tagged Democratic Party, election 2016, feminism, politics, town government. Bookmark the permalink.