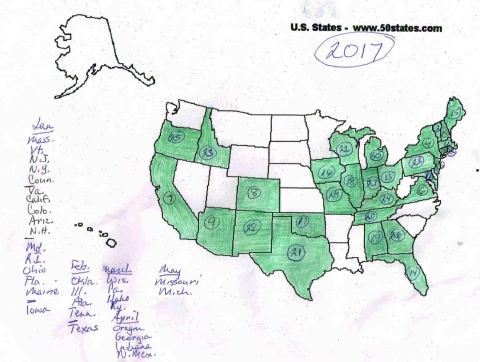 Missouri and Michigan showed up in May. Too bad Mississippi didn’t make it a 3M hat trick.

The tally was disappointing till I consulted my maps for previous years. They reminded me that May often isn’t a big month for new spottings. 2016 brought just one (Missouri) and 2015 two (Idaho and Utah). I counted five in 2014 (Alabama, West Virginia, Kansas, Tennessee, and Missouri), but 2014 was the best overall of the last several years, not least because Nebraska slid in just under the wire at the end of December.

Missouri does seem to have an affinity for May, or maybe it’s May that attracts Missouri.

I’m bemused by the absence of North Carolina, South Carolina, and Washington State. They’re usually on the map before June. I’m pretty sure I’ve seen all of them, but it hasn’t registered because I thought I already had them. And oops! once again I’ve forgotten D.C. I know I’ve seen at least one from the Last Colony. I’ll be more attentive in June.

4 Responses to May License Plate Report