Here’s an addendum of sorts to “Tolerant, Up to a Point,” posted yesterday.

During the discussion of the Vineyard’s lesbian and gay history at the Spectrum Film Festival, an audience member mentioned Margaret Webster (1905–1972), the eminent Anglo-American actor and theater director. Webster, a Vineyard summer resident. had at least two long-term lesbian relationships, first with Eva Le Gallienne, another theater notable; and later with the prolific British novelist Pamela Frankau. 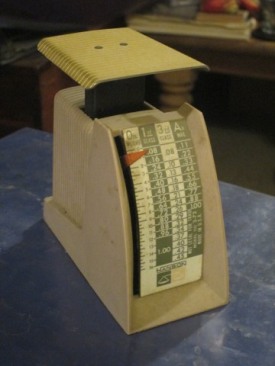 Strange but true, I have a little postage scale that once belonged to Margaret Webster. It was given to me by the late Mary Payne (1932–1996), who founded Island Theatre Workshop (ITW) in 1968 and was its artistic director until her death.

Mary recognized me as a lesbian sister almost right off the boat and within a year or so had roped me into ITW and the island’s then-vibrant theater community. True to form, it was a magnet for misfits and nonconformists — lesbians, gay men, creative types, pagans, recovering alcoholics and relatives of alcoholics . . .

My people, in other words.

At one point Mary hired me to help her clean up and paint what had been her bedroom. She needed extra money, the room had a separate entrance, and she was planning to rent it out. This involved going through lots and lots of stuff and is probably when she gave me the postage scale. First-class postage on the scale is 8¢, which suggests it was made between May 16, 1971, and March 2, 1974, when first-class postage went up to 10¢. Webster died on November 13, 1972.

We talked a lot, Mary and I, during that project. My poem “The Lapsed Archivist Attends a House Cleaning” grew out of our conversations. The “mentor” referred to in the second stanza is Margaret Webster. The “woman lover” is Pamela Frankau. I’m not sure “thirty years” is accurate; one source says Frankau and Webster’s relationship began in the mid-1950s, though they may have known each other longer. Millie Barranger’s Margaret Webster: A Life in Theater” says that Webster was devastated by Frankau’s death in 1967 and that “eventually, she returned to her beloved cottage on Martha’s Vineyard and gathered friends around her.”

This would have been when Mary was starting Island Theatre Workshop, and I’m guessing it’s when she and Webster knew each other.

The Lapsed Archivist Attends a Housecleaning

You are outside painting furniture, I
am working in the bathroom, sanding through
three colors of cracking paint. We
are getting ready for your summer tenant.
The diamond window frames are splintered,
gouged with previous efforts; “Sappho’s Coming!”
exults a sticker on the mirror, perhaps
announcing me, you said, a lesbian poet
making poems today with brush and scraper.

Inside you sort through piles and boxes,
deciding what to keep and where to put it,
calling me to see the glossy pictures
of your high school yearbook. You tell
me of sitting by a fire, burning letters
one by one, the letters of your mentor.
Thirty years of letters to and from
her woman lover. You honored her request.

And what if you, or someone else,
willed me to burn her letters?
I once spent hours haunted by
the voices we have lost, unfolding
brittle papers not a decade old,
cataloguing, laying each one flat
in acid-free gray boxes. Could I
consign your letters to the flame,
or would I think of living widows
dying on their husbands’ pyres?
Would I close my eyes and cast in
unread bundles, or try to take
the ones in my own writing back?
Would I hear crackling in the fire
the voices we have lost?

As I complete the second coat, golden
flames are dancing in the diamond panes:
daffodils, from bulbs your mother
planted nineteen years ago. “Sappho’s
Coming!” sings the mirror, Sappho
whose tenacious legacy of fragments
survives two thousand years of burning.
Still some say she pined for some man’s
love. This Sappho shreds all drafts
of each completed poem; each jewel forgets
being chiseled from the vein.
Purged of dross, your mentor’s life
is found in theatre files. I
would not have known had you not told me.

Susanna edits for a living, writes to survive, and has two blogs going on WordPress. "From the Seasonally Occupied Territories" is about being a year-round resident of Martha's Vineyard. "Write Through It" is about writing, editing, and how to keep going. She also manages the blogsite for the Women's Committee of We Stand Together / Estamos Todos Juntos, a civic engagement group on Martha's Vineyard.
View all posts by Susanna J. Sturgis →
This entry was posted in musing and tagged history, Island Theatre Workshop, Mary Payne, theater. Bookmark the permalink.

8 Responses to Some Personal History