Deer Week has rolled around again. As noted last year in “Blaze Orange,” Deer Week is almost two weeks long — this year it runs from Monday, November 30, through Saturday, December 12 — and it’s not the only time deer can be hunted on Martha’s Vineyard. Archers could hunt deer from October 19 through November 28. Hunters who favor “black powder” firearms get their chance from December 14 through 31. 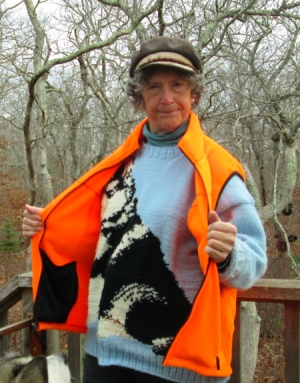 Deer Week, or Deer Almost-Two-Weeks, is the only time deer can be hunted with shotguns. I stay out of the state forest during Deer Week, and avoid large tracts of land where hunting is allowed. Last year a friend gave me a blaze orange vest. I donned it a little sheepishly, having survived all these years without one, but I’m wearing it again this year.

It’s odd to be writing this in the wake of yet another mass shooting, in San Bernardino, California, but after I moved to Martha’s Vineyard 30 years ago, the thing that changed fastest was my attitude about guns.

In Washington, D.C., where I’d lived for the previous eight years, guns were carried by cops and criminals, both of which groups I was wary of. If anyone I knew kept or carried a gun for self-protection, I didn’t know about it. Plenty of women I knew did carry some form of tear gas. When I was a kid, maybe 10 or 11, I did some target practice with my father’s .22. I earned several NRA riflery patches at summer camp. As a grown woman, I saw guns primarily as weapons that had been used against people I knew and might be used against me.

On Martha’s Vineyard it wasn’t long before I started meeting people who hunted, and people whose family members and neighbors hunted (and who occasionally benefited from the bounty). Likely as not, they had first gone hunting with their fathers and uncles and older cousins. (Yes, nearly all of them were men.) In the process, they’d learned more than marksmanship: they learned to know and be at home in the woods. What they killed went into the freezer and eventually wound up on the supper table.

They were, in short, neither cops nor criminals. They were friends of friends and people I ran into regularly at the post office or the grocery store. They were neighbors. They weren’t scary.

In the years that followed, and especially as my online world expanded to include a variety of people living in all parts of the country, I noticed that when guns and gun control came up, the city people tended to have a different take on the subject than rural and small-town people. I came to believe that this had much to do with our personal relationship not necessarily with guns but with people who used guns. If you associated guns primarily with cops, criminals, and men violating restraining orders, you leaned heavily toward stricter gun controls and even a ban on personal firearms. If you’d grown up around hunters, knew hunters, and maybe were one yourself, you tended to lean in the other direction. City people are less likely to know hunters than small-town and rural people.

The rhetoric around guns has grown ever more extravagant, and what passes for debate ever more polarized, but underneath it all I do believe there are millions upon millions of people whose experiences and perspectives may be very different but who are still willing and able to take part in a civil discussion. On one hand, guns can do more damage in less time and from a greater distance than any other widely available tool. On the other, the malaise that afflicts this country isn’t going to be cured by a ban on firearms, even if such a ban were desirable or enforceable, which it isn’t.

That’s enough for now. I’m donning my blaze orange vest and going for a walk with the dog.

Susanna edits for a living, writes to survive, and has been preoccupied with electoral politics since 2016. She just started a blog about her vintage T-shirt collection: "The T-Shirt Chronicles." Her other blogs include "From the Seasonally Occupied Territories," about being a year-round resident of Martha's Vineyard, and "Write Through It," about writing, editing, and how to keep going.
View all posts by Susanna J. Sturgis →
This entry was posted in musing, outdoors and tagged fall, guns, hunting, year-rounders. Bookmark the permalink.