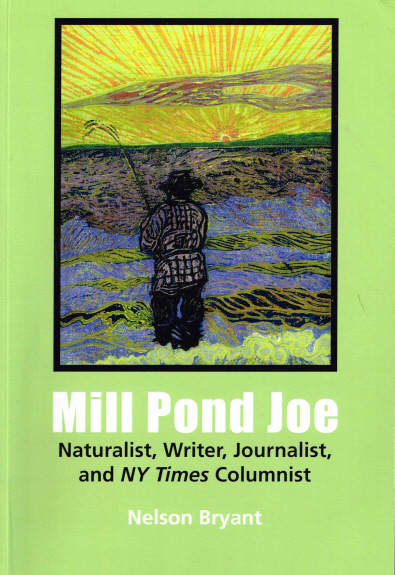 Mill Pond Joe is available at island bookstores and from the usual online outlets.

Nelson Bryant grew up on Martha’s Vineyard, and from 1967 till 1998 he was the outdoors columnist for the New York Times. His tales of hunting, fishing, and general outdoor adventuring on the Vineyard and in many other places make this book worth reading for anyone interested in those subjects. So, too, do his often harrowing stories about his World War II service, and his anecdotes about his time as managing editor of New Hampshire’s Claremont Daily Eagle will ring many bells with anyone who’s ever worked in (relatively) small-town journalism. (That would include me.)

But for those who expect from memoir some insight into the writer’s life Mill Pond Joe (YBK Publishers, 2014; $18.95) may prove disappointing. The startling story that opens the book — Bryant’s six-year-old sister drowned when he was eleven, with him nearby — is only referred to a couple of times in the subsequent pages. Can you imagine such an incident not suffusing your life for decades afterward? I can’t either.

And in the background of all the compelling hunting, fishing, war, and newspaper stories we catch glimpses of too much drinking, a marriage that isn’t going well, a sibling and adult children with serious problems.

Another caution: Like all too many self-published books, this one could have benefited from stronger substantive editing and copy editing (son Jeffrey’s name even has three f’s in the dedication). And the extra-large pages, unbroken by images or other graphics, do not make reading easy.

I posted the review above on Goodreads, writing for a general audience and trying to keep it short. Here are a few musings that I’ve been trying unsuccessfully to stuff into the review.

Nelson Bryant is of my parents’ generation. My father was also a World War II vet. My siblings and I fall into the same age range as Bryant’s children. More: my parents’ marriage was not happy, my father had affairs, and my mother was an alcoholic. Hence my strong suspicion that though Bryant is generous with his regrets about things done and undone, he hasn’t really grappled with what was going on and his own part in it. Again, no writer is obliged to go where he or she doesn’t want to go — but when writers hold back, readers often sense that they’re missing something.

From boyhood onward, where Bryant chose to go was into the “natural” world, of woods and streams, of shore and the ocean. This world was largely a man’s world, a “natural” extension of the male world of Dartmouth College and wartime military service. Except in the stories of his newspaper days, women remain in the background. His sons go hunting and fishing with him, but not, apparently, his daughters — or his wife. It’s encouraging that the more recent outdoor stories include his female partner, Ruth. They go into the woods together. He hunts and fishes; she draws and paints.

Things have changed indeed, in the storyteller and in the world at large, though deep in the woods, the great currents that rose in the mid–twentieth century — the civil rights movement, the antiwar movement, and the women’s movement, among others — are as peripheral as women to the story. The natural world, it seems, offered refuge from all those convulsive, upsetting changes in the unnatural world. Tellingly, though Bryant was for two decades a columnist for the New York Times, he chose to have as little as possible to do with New York itself (a choice with which I have nothing but sympathy). At the same time, his urban connection gave him access to outdoor adventures that he might not have found on his own.

Which brings me round to Martha’s Vineyard, the main reason I’m blogging about Mill Pond Joe. Because after the very vivid boyhood stories, the Vineyard recedes into the background. It’s changing too, but we see the changes through the eyes of an occasional visitor, albeit one whose knowledge of the place is more than casual. The book takes its title from the persona Nelson Bryant created in telling his boyhood stories to his own kids (the girls as well as the boys?). It works, for Mill Pond Joe is, among other things, the tale of a fellow who has managed to live a life that looks, at least on the surface, like a boyhood dream come true.

Susanna edits for a living, writes to survive, and has been preoccupied with electoral politics since 2016. She just started a blog about her vintage T-shirt collection: "The T-Shirt Chronicles." Her other blogs include "From the Seasonally Occupied Territories," about being a year-round resident of Martha's Vineyard, and "Write Through It," about writing, editing, and how to keep going.
View all posts by Susanna J. Sturgis →
This entry was posted in Martha's Vineyard, outdoors and tagged books, hunting, Nelson Bryant, West Tisbury, year-rounders. Bookmark the permalink.