A Saner Way to Shop

A Vineyard Haven retailer’s announcement that her store would open at 5 a.m. on “Black Friday” elicited some groans and eye-rolling on Facebook and elsewhere. Martha’s Vineyard is more like the world across the water than some people like to admit, but it’s still hard to imagine such an announcement eliciting anything more than a yawn Over There.

Behind the groans and the eye-rolling (I confess, I did some of both) is concern that Over There is making inroads Over Here. It is, but this isn’t exactly news. It’s been going on at least since the English set up housekeeping Over Here in the mid seventeenth century. Nevertheless, I turned to Google for some assurance that things Over Here are not all that bad compared to what’s going on Over There.

This was not hard to find. Near the top of Google’s hit list was “17 Black Friday Stories That Will Make You Lose Faith in Humanity.” Subtitle (which I’m pretty sure was intended somewhat tongue-in-cheekily): “The crushing forces of reckless capitalism can force people to become monsters, especially when there are discounted electronics at stake.”

Why, I wondered, would anyone read a story that promised to make them lose faith in humanity?

Because gloom-and-doomery is as compelling to some humans as discounted electronics are to others. But of course. I’m pleased that I only got through two of the stories; however, I couldn’t help noting that the Vineyard Haven retailer who opened at 5 a.m. on Black Friday deals in electronics. 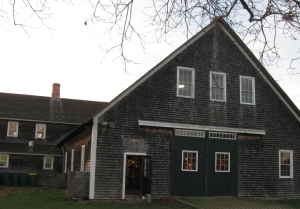 The Ag Hall, site of the post-Thanksgiving Artisans’ Fair.

All of this is by way of prologue. As you could surmise from my last post, I spent Black Friday and the Saturday that followed — which has a name of its own: Small Business Saturday — at the Artisans’ Fair. “Crushing forces” and “monsters” were nowhere in sight. Most of the crafts and artworks for sale used technology that was well established long before the twentieth century. Which is not to say that their creator-vendors were stuck in the past: the regulars all use electronics — tablets, smart phones, credit-card verification gizmos — to facilitate sales.

It’s hard to imagine customers and vendors at the Thanksgiving Artisans’ Festival getting into a slugfest over discounted electronics or anything else. They’re too busy appreciating each other’s creations and catching up on the news. To tend a booth at the fair is like sitting in front of the West Tisbury post office for six hours: you see people you haven’t seen in weeks, if not months, and they’re often accompanied by people you don’t know or can’t remember, to whom you will shortly be (re)introduced. 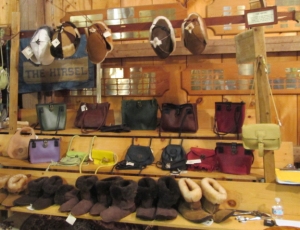 The Hirsel’s display. My slippers are just like the brown ones in the middle of the bottom row.

One of my missions was to get my favorite slipper repaired. Leatherworker Tom Barrett of The Hirsel repairs anything he sells — for free. I gave him the slipper Friday; he brought it back to me Saturday morning.

Dan Waters, poet and printmaker among other things (he was just elected West Tisbury’s town moderator), makes the world’s best greeting cards. His booth was right next to “writers’ row,” where I and my sister writers — Shirley Mayhew, Lynn Christoffers, and Cynthia Riggs — held court. So of course I stocked up on cards. Linda Alley of New Lane Sundries traded me two jars of her cranberry conserve for one copy of my Mud of the Place. Very good deal. 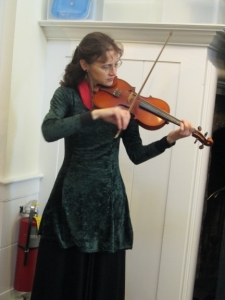 Mary Wolverton strolled up and down the aisles, entertaining us with Celtic fiddle music.

I also scored two pairs of earrings from Cecilia Designs and would have scored more from her and other jewelers (I have a weakness for earrings) had price been no object. Next to all the meet-and-greeting that goes on at the Artisans’ Fair is the pleasure of appreciating all the colorful creativity and craftsmanship on display, and chatting with the people who did the creating and crafting. You don’t have to spend any money at all — though of course the vendors will appreciate it if you do.

I don’t believe this happens at the typical Black Friday event. If it did, probably shoppers would be less likely to turn into adrenaline-crazed monsters. Being serenaded by lively fiddle music couldn’t hurt either. 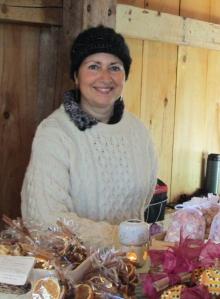 Andrea Rogers at her booth

The Vineyard Artisans’ Festival season kicks off every year on Memorial Day weekend. Fairs are held on the big holiday weekends. From early June to early October, there’s one every Sunday, and in July and August there’s also one every Thursday. Founder and organizer Andrea Rogers not only oversees all this; she manages to sell products she makes from the lavender she grows.

Some color from the Thanksgiving fair: 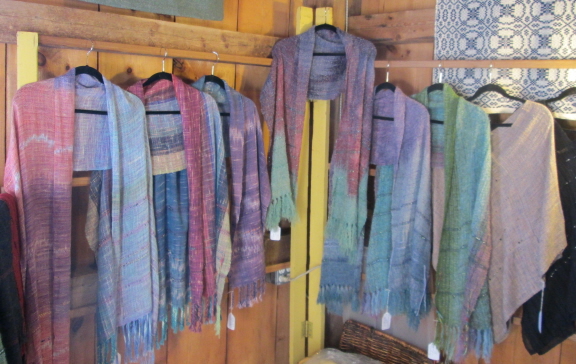 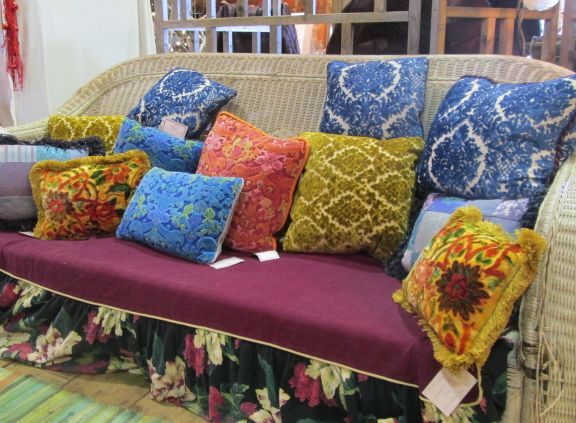 Pillows by Sylvie Farrington of SylvieBags. Her handbags were also on display.

Susanna edits for a living, writes to survive, and has been preoccupied with electoral politics since 2016. She just started a blog about her vintage T-shirt collection: "The T-Shirt Chronicles." Her other blogs include "From the Seasonally Occupied Territories," about being a year-round resident of Martha's Vineyard, and "Write Through It," about writing, editing, and how to keep going.
View all posts by Susanna J. Sturgis →
This entry was posted in public life, work and tagged Ag Hall, Artisans' Fair, arts, community, Dan Waters, West Tisbury. Bookmark the permalink.

8 Responses to A Saner Way to Shop