In early May — on the afternoon of Sunday, May 4, to be precise — a brushfire scorched some woods that Travvy and I often walk by. Firefighters from several towns put the fire out PDQ, before it could spread to the residence, the nursery school, or the school buses nearby.

But the visual transformation was dramatic. So was the acrid smell in the air. Ordinarily this area is thick with scrub oak, ferns, brambles, huckleberry bushes, and other undergrowth. The fire wiped the forest floor clean. 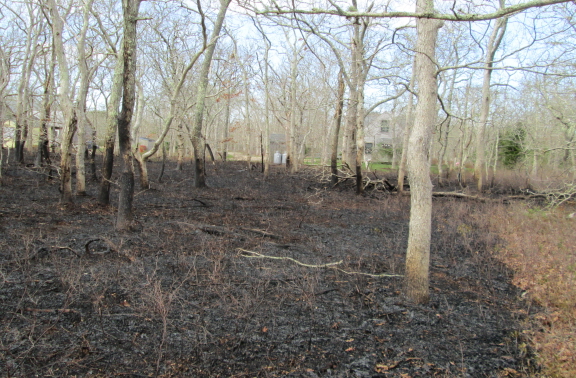 The firefighters held the line. At the far left through the trees is the nursery school. The house to the right belongs to the housing authority.

Travvy on the unscorched path

Travvy and I walk past this spot almost every day, and often more than once. We’ve been monitoring the changes. As May progressed, the oaks leafed out, as they were doing everywhere else in the neighborhood. At ground level, the place was still charred. The smoke smell diminished except when it rained. We didn’t have much rain in May.

Then as May turned into June, green started reappearing on the ground.

Ten days later, the ground was even greener. New growth is slowly covering the charred fallen branches. The scorch marks seem to be fading on the trunks of the trees. 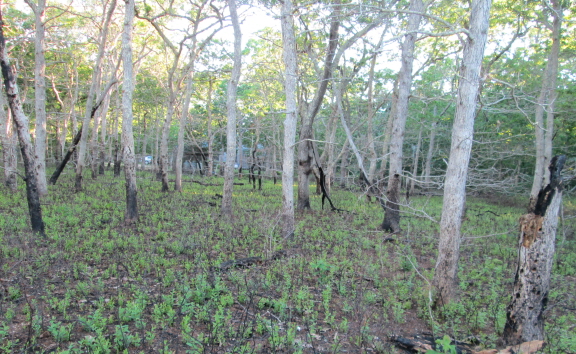 What a difference a scant six weeks can make.

Susanna edits for a living, writes to survive, and has been preoccupied with electoral politics since 2016. She just started a blog about her vintage T-shirt collection: "The T-Shirt Chronicles." Her other blogs include "From the Seasonally Occupied Territories," about being a year-round resident of Martha's Vineyard, and "Write Through It," about writing, editing, and how to keep going.
View all posts by Susanna J. Sturgis →
This entry was posted in outdoors and tagged fire, my neighborhood, Travvy, West Tisbury. Bookmark the permalink.