Travvy and I walk the path behind the West Tisbury School at least once most days. Some days it’s two or three times. It doesn’t change much. The four school buses disappear from the parking lot to pick kids up in the morning and take them home in the afternoon. Soccer balls that go AWOL from practice aren’t always retrieved when practice is over. Travvy likes to check out each new bit of food-related trash, but that’s about it.

Late yesterday afternoon this is what I saw up ahead: 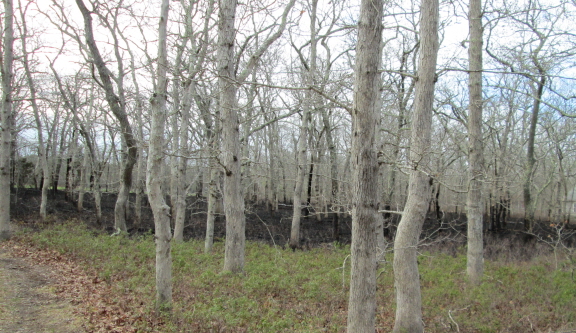 The air smelled charred. The buses were where they always are on a Sunday afternoon. The ground was scorched almost up to the parking lot, but not quite. 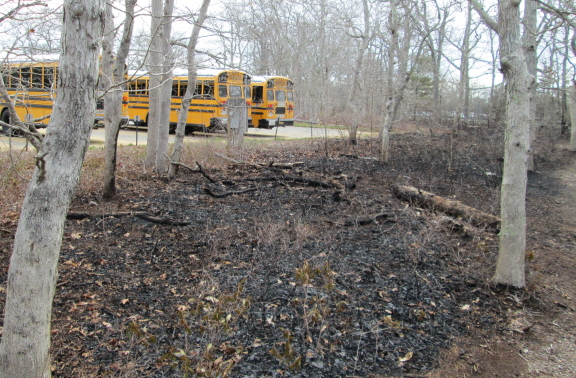 The path was a pale ribbon through the scorch. The fire had passed over it: nothing to feed on.

Fire had been here. Controlled burn, was my first thought, but why here? Why on a very windy Sunday afternoon? Why hadn’t the buses been moved out of range? Controlled burns are sometimes done on fallow fields overgrown with combustible scrub. This reduces the risk of wildfire and also enriches the soil.

Or perhaps this was going to be a house lot? Highly unlikely, thought I. There’s no access now, or likely to be in the future.

My neighbor was out doing yardwork when Trav and I got home. The fire was news to him. No, he confirmed: no house lot there. If it was a controlled burn, he added, the abutters would have been notified. My neighbor works for the county housing office, which manages one of the two nearest buildings. They hadn’t heard anything. (The other building is a nursery school.)

If you hear anything, let me know, I said.

As it turned out, I heard first. My writers’ group meets on Sunday nights. One member uses a wheelchair. The guy who helps him get around is a volunteer firefighter in Tisbury. Sure enough, he’d been called out to fight two fires yesterday afternoon. One of them was behind the West Tisbury School. A pile of mulch had overheated and spontaneously combusted.

In my horsegirl years fire was the #1 danger that was never far from anyone’s mind. Hay baled damp will mold, molding generates heat, and when bales of hay are packed tight in a loft there’s nowhere for the heat to go. I hadn’t realized that mulch could burst into flame.

This morning I walked the path with renewed appreciation for the island’s volunteer firefighters. The line between charred and uncharred could have been drawn with a ruler. The fire was put out before it could climb up the trees. And neither my neighbors nor I heard a thing, though we’re less than half a mile away.

The firefighters held the line. At the far left through the trees is the nursery school. The house to the right belongs to the housing authority.

The only clue outside the burned area: tire tracks on the soccer field that weren’t there Sunday morning

Susanna edits for a living, writes to survive, and has been preoccupied with electoral politics since 2016. She just started a blog about her vintage T-shirt collection: "The T-Shirt Chronicles." Her other blogs include "From the Seasonally Occupied Territories," about being a year-round resident of Martha's Vineyard, and "Write Through It," about writing, editing, and how to keep going.
View all posts by Susanna J. Sturgis →
This entry was posted in outdoors and tagged fire, firefighters, my neighborhood, Travvy, West Tisbury School. Bookmark the permalink.