I was, as usual, running a little late. I was caught, totally not as usual, in a bumper-to-bumper traffic jam on sleepy Scotchman’s Bridge Road. Leaning out the window, I saw cars backed up behind me as far as the Granary Gallery on Old County. Ahead they stretched at least to the State Road intersection. When I got up that far, I could see the line continued to the Ag Hall entrance. I cut right and followed the clever pickup driver who figured he could get onto the Ag Hall grounds the back way. He was right.

It was a chilly, overcast Wednesday afternoon, and we were all headed for the memorial service for Pat Gregory, West Tisbury town moderator, business owner, former math teacher and soccer coach, and all-around good guy, who was shot and killed by a robber while hiking in northern California on May 16.

We converged on the Ag Hall from all directions, many of us bearing dishes for the potluck that would follow the service. My offering was cranberry walnut bread.

The place was, to put it mildly, packed. Estimates ran as high as a thousand, from toddlers up to octo- and probably nonagenarians. Just about everybody agreed that they’d never seen that many people in the Ag Hall at one time. The turnout was about three times that of the best-attended annual town meeting Pat ever presided over. (With a spread like that, we’d pack the school gym to capacity every April.)

At many memorial gatherings, there’s time for mourners to speak if they’re moved to do so. At the outset, the Rev. Cathlin Baker of the West Tisbury Congregational Church said there would be no open mike, which, given our sheer numbers, made sense to everybody. Besides, without Pat at the podium, ever attentive to raised hands and elapsed time, we could have extended the service into next week with our tributes. 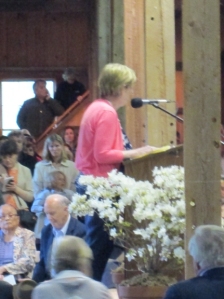 Instead, cards and pens were available on a table in the foyer. On each card “REMEMBERING PAT” was printed at the top, and there was plenty of room below to write memories of Pat and messages to his family. Pat’s grown children, Shannon and Tim, noted how important it had been, both while they were still in California and after they came home, to read all the comments posted to the newspaper stories and on Pat’s Facebook page. They looked forward to reading whatever we wrote.

This was not a mournful gathering. If black was worn, it was probably by coincidence. We laughed a lot, when the speakers recounted Pat stories and invoked a Pat Gregory that many of their listeners recognized. Pat, we were reminded, had drawn on his experience as a math teacher to run our town meetings. How lucky for us that he chose not to run them like the soccer referee he had also been.

Tim Gregory noted that though his father was gracious in many ways, he was not a gracious eater. Later on, as we served ourselves at the bountiful buffet, several of us thought we might spill a little barbecue sauce or salad dressing on our shirts in remembrance.

We heard stories of Pat as a very young man, before he and Dorothy moved to Martha’s Vineyard. Those who knew him primarily as a town official learned of his exploits on the golf course. Those who knew him as a business owner and computer expert heard of his skill as a teacher and coach. I knew Pat better when I left than when I arrived, but oddly enough, this didn’t make me regretful or sad. It made me feel lucky to have known him at all, and to be gathered in this hall with so many friends and neighbors and acquaintances who had known him too.

Only a few allusions were made to how Pat died. Daughter Shannon recognized that there is anger in the community but urged us to look beyond it. “Dad was not a man of vengeance,” she said.

Pat could have died just as unexpectedly of a heart attack, I thought, or in a car accident, or in a bad fall. In the Ag Hall on Wednesday afternoon, the how wasn’t all that important. What mattered more was the life that Pat lived, the example he set, the loss we all feel, and the fact that we’ve got each other to help us through it. Using a phrase that had been applied to her father, Shannon urged us to treat each other with “uncommon decency.”

Anger is natural, but it’s easy. Treating each other with uncommon decency, day in, day out — that’s hard. But if we manage to pull it off, who knows, decency might become more common and less difficult.

Susanna edits for a living, writes to survive, and has been preoccupied with electoral politics since 2016. She just started a blog about her vintage T-shirt collection: "The T-Shirt Chronicles." Her other blogs include "From the Seasonally Occupied Territories," about being a year-round resident of Martha's Vineyard, and "Write Through It," about writing, editing, and how to keep going.
View all posts by Susanna J. Sturgis →
This entry was posted in public life and tagged Ag Hall, community, death, West Tisbury. Bookmark the permalink.

2 Responses to An Uncommon Memorial