The last couple of weeks I’ve been too obsessed with impending deadlines to have adventures or blog about the adventures I wasn’t having. This morning I had a little adventure in spite of myself. 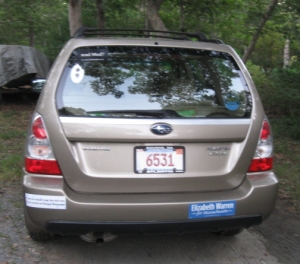 Usually I write for an hour or two before Travvy and I go for a long walk. This morning I skipped writing so Trav and I could get our walk in before I delivered Malvina Forester to Courtesy Motors at 8 a.m. to have her rear shocks replaced. Larry asked if I needed a ride home. Nah, said I, patting Hekate O’Dell, who was slung over my shoulder in her brown messenger bag. I’ll set up my office at the Black Dog Café. I’ve got enough work to keep me busy all day.

Larry didn’t think it would take all day. Early afternoon, he thought; earlier if two of the guys could work on it.

Fine, said I, and headed down the road.

The Black Dog Café is a short walk from my mechanic’s shop. I like their breakfast burritos. They have wall sockets to plug Hekate into — Hekate’s battery is in desperate need of replacement — and free wi-fi.

This morning the free wi-fi was crucial because I had a big job due in New York this morning. My plan was to finish my second pass through (very messy) endnotes, clean up my style sheet, and send it off. Piece of cake.

Except the wi-fi wasn’t working.

It still wasn’t working after I finished the endnotes and cleaned up the style sheet. And it was only 10 a.m. Too early to go bug the mechanics. So I packed Hekate back into her bag and hitchhiked home. Two rides, one to Old County, the other to the West Tisbury School. Not bad. I hiked across the playing field, through the woods, and up the road to home. Travvy roused himself from his nap to ask where his cookie was.

I set Hekate up on my lapdesk, plugged her in, and called Larry to say I was at home and he could just call me when his guys were done with Malvina.

His guys were already done with Malvina. They’d just backed her out into the parking area. Larry was all apologetic that I’d hitchhiked home, it being so cold out. (It was in the mid-teens earlier in the morning, and it hadn’t gotten much warmer.) I assured him that this was no big deal.

His son and colleague, Jesse, was out road-testing a car that had been overheating. Jesse, said Larry, could pick me up.

After a little back-and-forthing on the phone, I walked back across the playing field and met Jesse on Old County Road.

Pretty soon I was driving Malvina off the lot. Sure enough, the clunking sounds I’d been blaming on Vineyard roads were gone. The new shocks were doing their job. My credit card mitigated the shock to my budget.

It was noon before I finally sent off the job I’d promised to send “first thing in the morning,” but it’s gone.

Susanna edits for a living, writes to survive, and has been preoccupied with electoral politics since 2016. She just started a blog about her vintage T-shirt collection: "The T-Shirt Chronicles." Her other blogs include "From the Seasonally Occupied Territories," about being a year-round resident of Martha's Vineyard, and "Write Through It," about writing, editing, and how to keep going.
View all posts by Susanna J. Sturgis →
This entry was posted in technology, work and tagged Black Dog, Courtesy Motors, getting around, Malvina Forester, walking. Bookmark the permalink.

6 Responses to My Morning