Rumor has it that a photographer well known on Martha’s Vineyard coined the term “trustafarian.” This fellow comes from money and has ties to Jamaica, so the rumor may well be true.

“Trustafarian” appears in various online dictionaries, like the Urban Dictionary and the The Free Dictionary. The gist is that a trustafarian is someone from a wealthy background whose inherited money, invested in some sort of trust fund, enables him or her to not work for a living and thus avoid the obligations, lessons, limitations, and perils that come therewith.

Trustafarians don’t necessarily have any affinity for Jamaican music, food, or culture. They are, however, generally hip in their political and musical tastes. They experiment with various spiritual paths and alternative medical practices. They buy organic, fair trade, and all that scrupulously prepared stuff. If they vote, it’s almost certainly for Democrats or third-party candidates.

Martha’s Vineyard seems to have a relatively high percentage of trustafarians, but it’s hard to tell. Trustafarians blend in with the general population. One definition asserts that trustafarians eschew “conventional attitudes to work, dress, drug taking, etc.” On the Vineyard such eschewing is endemic. The observer who suspects that all such eschewers are trustafarians will be wrong most of the time.

We do gossip occasionally about where so-and-so’s money came from, speculate about what we might do if we had that kind of money, and indulge in some schadenfreude when a trustafarian doesn’t turn out so well.

I started off to blog about how the privilege of not having to work for a living has its downsides. These can include a general lassitude that resembles, and may actually be, depression, and total cluelessness about what things cost when you have to have to exchange hours for the money required to buy them. These things are not uncommon on Martha’s Vineyard.

While writing, though, my attention shifted from trustafarians to trustafarianism. Did I make that word up? Maybe yes, maybe no, but either way I’m taking it to mean the assumption that as priorities go, the ability of working people to make a decent living is of secondary importance. This belief is much in evidence on the national level, where many elected officials, business leaders, and policymakers don’t seem all that concerned that a person can work full-time and barely earn enough to feed herself.

It’s also alive and well on Martha’s Vineyard, but it’s subtle. Everyone pays at least lip service to the importance of jobs. But consider, for instance, the much-discussed “affordability gap.” This is the gap between what housing costs (a lot) and what working people can afford (a lot less). Everyone‘s noticed the affordability gap. But when talk turns to closing the gap, the focus is overwhelmingly on lowering the cost of housing, not on increasing the number of better-paying jobs.

Why not? One reason is that we tend to focus on the demands of the seasonal economy, which is pretty much the only economy we have, or can imagine having. Maintaining the scenic vistas, pristine beaches, and all the things that make Martha’s Vineyard attractive to tourists and summer people comes first.

The seasonal economy does, of course, create jobs, lots of jobs. Those jobs tend to be seasonal and relatively low-paying. The better-paying jobs, such as those in the building trades, often help foster the conditions that are making the place unlivable for working people: rising property values and the second-home market, which make affordable year-round housing hard to find.

Conflicts between the workaday Vineyard, where the challenges of making a living are always front and center, and the seasonal economy’s demand for scenic vistas occasionally rise to the surface. Not long ago abutters took exception to the Goodale pit, ostensibly because sand from the pit was blowing on their road but at least as much because they didn’t want to look at it. I think the pit is beautiful. It looks like Lawrence of Arabia meets the industrial revolution. For others, though, it conjures visions of William Blake’s “dark Satanic Mills” out to destroy the Vineyard’s “green and pleasant land.”

Trustafarians make up a small percentage of the island’s population, but they’re not the only year-round residents who aren’t trying to make a living here. Many retirees spent their work lives elsewhere, where there were more job options and the pay was better. Some Vineyarders grow up here, move away, then come back in middle age, sometimes bringing their jobs with them. Some Vineyarders physically commute to off-island jobs.  Others telecommute and don’t have to go anywhere.

For a significant and probably growing number of year-round residents, the income side of the affordability gap is of secondary importance. That’s what I’m calling (for the moment at least) “trustafarianism.”

What does it matter? Maybe it doesn’t. I just heard another recent arrival say, more or less, that if people can’t afford to live here they should go elsewhere. It wasn’t the first time I’ve heard this. Nowhere close. But at the same time, many of these recent arrivals wax rhapsodic about “the community,” how different it is from other places they’ve lived. Where do they think this community comes from? Who do they think sustains it?

People who both live and work here, that’s who. People who’ve been committed to the Vineyard for decades, maybe their whole lives. They carry the history and customs of the place in their bodies as well as their minds. The intertwining relationships that grow from working together over the decades and even generations are the roots from which community grows. As the workforce becomes less rooted, more transient, what happens to community? I guess we’ll see, won’t we.

Trav and I appreciate beaches and scenic vistas, especially in January. In summer we hide out in the woods. 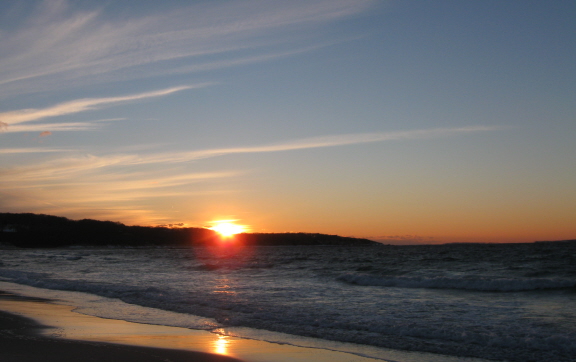 Susanna edits for a living, writes to survive, and has been preoccupied with electoral politics since 2016. She just started a blog about her vintage T-shirt collection: "The T-Shirt Chronicles." Her other blogs include "From the Seasonally Occupied Territories," about being a year-round resident of Martha's Vineyard, and "Write Through It," about writing, editing, and how to keep going.
View all posts by Susanna J. Sturgis →
This entry was posted in Martha's Vineyard, musing, work and tagged character of the island, class, community, housing, island economics, year-round summer people. Bookmark the permalink.