WARNING: You’re going to have to use your imagination on this one because I didn’t have my camera with me. 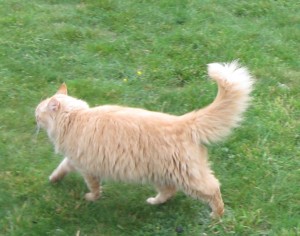 Over the holidays I’ve been looking after a neighbor’s critters: one dog, two cats, and five hens. I feed them all, go walking with the dog twice a day, let the cats in or out depending on which side of the door they’re meowing at, shut the hens in at night, and let them out in the morning. Night before last we got about eight inches of snow. The last day or so we’ve been in a deep freeze.

Ordinarily the hens would be free-ranging around the neighborhood during the day, eating bugs ’n’ ticks ’n’ stuff. Since the snow is up to mid-breast on them, they’re staying in the little coop, where they’ve got cracked corn, some kibbly-looking stuff that’s supposed to encourage egg laying, and a heated water gizmo. Sometimes one picture is worth a thousand words, so in lieu of my description here’s a photo of it: 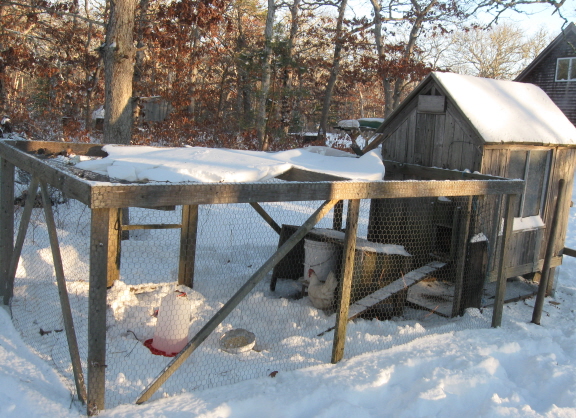 That’s from this morning. Note that only one hen has come outside. The others, sensibly enough, are staying inside where it’s warm(er).

So late yesterday afternoon, after sundown but with plenty of light in the sky, I arrived to close the hen house door. (They put themselves to bed.) Cricket, the larger of my two feline charges (see photo above), was patrolling the perimeter of the enclosure’s roof. This was highly unusual: Cricket and his buddy, Love-Bug, leave the hens alone and show little interest in their doings.

Cricket was, however, obviously in hunting mode. Around and around he went, his attention focused inside the coop. Several times he’d bat out with one paw. He’d start to step out across the chicken-wire ceiling and think twice when it wobbled. Once he snagged a toenail in the wire. What the hell . . . ?

At least half a dozen little brown birds (LBBs: generic term for those of us who can tell a chickadee from a blue jay from a seagull but that’s about it) were flying frantically around inside the coop. Cricket was watching feline reality TV. Clearly he was hoping to make it interactive.

The LBBs had been lured in by the hens’ feed and the unfrozen water. I had no idea how they’d gotten in there. Cricket hadn’t figured it out either. Avian reality TV didn’t look like fun at all. The little birds were darting back and forth, pausing only to try to squeeze through the chicken wire.

I thought rescuing them would be easy. I unlatched the door and held it open, keeping an eye on Cricket all the while. Did the birds make a beeline for freedom? They did not. Over the next five minutes or so, three birds did fly through the open door. I think this was by chance. For sure the others didn’t learn from their example. They kept throwing themselves against the chicken-wire walls while Cricket stalked above them, tail twitching. One little birdie huddled motionless on the ground. Maybe it was dead.

Light was leaching from the sky. The blue was getting deeper and darker. I had my flashlight, but I was also getting cold. What ethical responsibility do I have to these stupid birds anyway? I wondered.

I ventured into the coop. To stand upright in it, you’d have to be no more than three foot six, maybe less. I’m five foot almost-five. So I hunched over and tried to trap a birdie, hopefully without giving it a heart attack. I managed to catch one and show it out. Then another. And another.

In trepidation I went over to the bird that looked dead. As my gloved hands moved in on it, its wing moved. By the time I got it to the door, it was awake again. Off it flew.

By now it was dark. All this stooping was not making my back happy. One or maybe two birds remained, but they were under the hen house, where the clearance is less than a foot. Enough, thought I. I’ve done my best, and who’s to say you stupid buggers won’t be back as soon as I close the door?

By this point Cricket had given up and gone home. It was time for me to do likewise. Love-Bug — a smaller version of Cricket, with white chest and paws — was now lurking around the coop. I latched the door, gathered her up, and took her with me to the house. Both cats spent the night indoors.

When I went over there this morning, it was six below (F; -21 C). There were no little brown birds in the coop, either dead or alive. 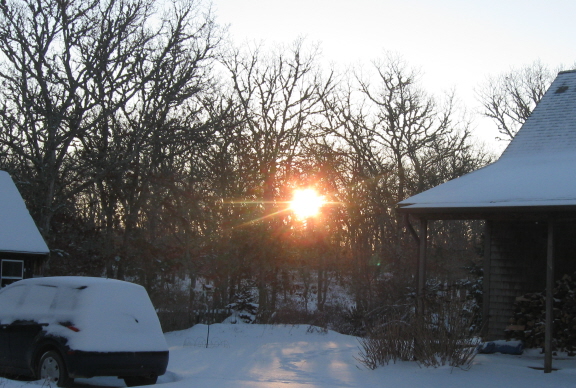 Susanna edits for a living, writes to survive, and has two blogs going on WordPress. "From the Seasonally Occupied Territories" is about being a year-round resident of Martha's Vineyard. "Write Through It" is about writing, editing, and how to keep going. She also manages the blogsite for the Women's Committee of We Stand Together / Estamos Todos Juntos, a civic engagement group on Martha's Vineyard.
View all posts by Susanna J. Sturgis →
This entry was posted in Martha's Vineyard, outdoors and tagged birds, cats, my neighborhood, winter. Bookmark the permalink.

4 Responses to Cooped Up