Consider this a postscript to “Marijuana Special”. I was going to include it in my account of West Tisbury’s special town meeting, but the marijuana articles got the munchies and ate up all the space.

Article 11 generated some thoughtful discussion that touched on, among other things, subjects I obsess about regularly: community and the polarized mess the country is in. The subject was quorums (quora?). At present, 5% of the town’s registered voters must be present for a town meeting to conduct business. At present 5% is about 122. By my calculations, that means there are currently, give or take, 2,440 registered voters in my town.

A town meeting cannot be called to order unless a quorum is present. If enough of those who constitute the quorum dribble away during the meeting, no more business can be conducted.

Article 11 proposed to rescind the quorum requirement. In other words, a town meeting could discuss and vote on warrant articles no matter how many registered voters showed up. 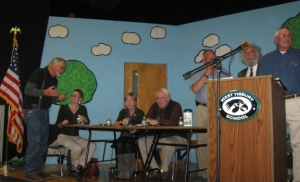 No, this does not represent an attempt by “government” to snatch power from “the people.” Every time we convene in town meeting, some of “government” — our three selectmen, our moderator, our town clerk, and the town’s executive secretary — is sitting on the stage, and most of the rest — planning board, zoning board, finance, and school committee members and more — are sitting among us in the seats. We know these people. In many cases we are or have been these people.

Spring’s annual town meeting (ATM) regularly draws enough voters for three quorums. The official count for Tuesday night’s special was 164. The dogs-on-the-beach specials of recent memory were very well attended. (See “Democracy Face-to-Face” and “The Politics of Personalities” for more about this.) Why move to rescind the quorum requirement?

Because it sometimes happens that a special town meeting (STM) — one called to transact town business or consider issues that can’t or shouldn’t wait till the next ATM — doesn’t get a quorum. Maybe the warrant includes only routine business, like moving money from one category to another. Maybe the weather is bad. Without a quorum, the meeting can’t happen. In such cases, rescission proponents argued, the diligent citizens who do show up are being penalized for the non-diligence of those who don’t.

My strong gut reaction was Keep the quorum! 122 out of 2,440 is not a huge number. The pro-rescission arguments didn’t sway me at all. They didn’t sway most of my fellow citizens either: the motion was defeated on a strong voice vote. The 5% quorum requirement stands.

From the discussion I was surprised to learn that the quorum requirement was recent. “In 2006,” explained Richard Knabel in a post-meeting email, “after several STMs with rather low attendance, I realized that WT did not have a quorum requirement, the only town on the Island that didn’t.” He circulated a petition to put the issue on the next STM warrant and quickly collected 150 signatures, well over the 100 required. “People were very much in favor of a quorum requirement, and it passed easily,” he wrote. (Since 2008 Richard has been one of West Tisbury’s three selectmen.)

He recalled just two instances where an STM didn’t have a quorum: “In one we [the board of selectmen] postponed a week, and we had the meeting. In the other (this past spring) we just cancelled it.”

During the discussion I was particularly struck by the comments of one voter, a longtime participant in town politics and member of the League of Women Voters. She grew up in a small Connecticut town run by town meeting. As the town grew, participation in town meetings declined. Eventually the town adopted a “representative town meeting” government, in which voters elect citizens to represent them at town meeting. Over time, she said, things changed. People felt more and more detached from town government. They began to think of themselves as “us” and their elected officials as “them.”

In recent years I’ve become a regular voter and a regular town meeting goer, but I’m not a born-again zealot or a dewy-eyed idealist on the subject. During the 13 or 14 years I lived in Vineyard Haven, I hardly ever went to town meeting. Attend a town meeting or two and you’ll realize that to really participate in town government you have to do more than vote aye or nay or even get up and speak. To propose a change in, say, the school budget, you have to understand it as well as school committee and finance committee members do. This takes serious time and effort: following newspaper reports, attending meetings and public hearings, etc.

You’ll also notice that there isn’t a lot of turnover among our elected officials. This is because in most town elections, most of them run unopposed. And while upwards of 15% of West Tisbury voters are attending annual town meeting, as many as 85% are doing something else.

This does not inspire great faith in participatory democracy. Nevertheless, I believe that having the option is important. When I don’t go to town meeting, it’s because I choose not to go. It’s not because I’m being shut out or because I think it’s someone else’s job. Which makes it harder — if I’m halfway honest about it — to slide into us/them mode. It’s so easy, and so comforting, to believe that all our problems are their fault.

It also lets us off the hook.

Susanna edits for a living, writes to survive, and has two blogs going on WordPress. "From the Seasonally Occupied Territories" is about being a year-round resident of Martha's Vineyard. "Write Through It" is about writing, editing, and how to keep going. She also manages the blogsite for the Women's Committee of We Stand Together / Estamos Todos Juntos, a civic engagement group on Martha's Vineyard.
View all posts by Susanna J. Sturgis →
This entry was posted in Martha's Vineyard, public life and tagged community, politics, town meeting, voting, West Tisbury. Bookmark the permalink.