I took this photo almost a year ago. The winged sumac was getting redder and bolder and I was looking forward to getting another shot.

Monday morning I met a young guy with a brush cutter at just this spot. He’d already cut a several-foot swath on both sides of the trail. He looked a little bewildered. I said hi to him, he mumbled hi to me. Travvy seemed to make him nervous so we kept walking.

By Tuesday morning he had finished the job. 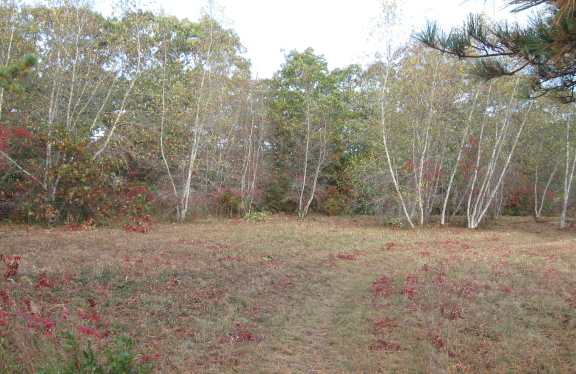 Such a small loss as losses go, but it choked me up. The brush cutter wasn’t to blame, of course. He was working for the Sheriff’s Meadow Foundation (SMF), which owns this little triangular parcel across from the West Tisbury School. SMF is already one of my least-favorite island organizations, not least for their successful legal campaign to deprive Ben Ramsey and Nisa Counter of their Chilmark land. This doesn’t make me like them any better.

The winged sumac will grow back, of course. Maybe next year the “conservationists” will hold their fire till the color passes.

Monday afternoon a young man from my town was killed up the road from me when his car crashed into a tree. I didn’t know him and don’t know his family, but two degrees of separation must be the max on Martha’s Vineyard and several of my friends did. He’s gone. No appeal. Not coming back. Those who live on will make do as best they can.

My heart is moved by all I cannot save:
so much has been destroyed

I have to cast my lot with those
who age after age, perversely,

with no extraordinary power,
reconstitute the world.

Susanna edits for a living, writes to survive, and has two blogs going on WordPress. "From the Seasonally Occupied Territories" is about being a year-round resident of Martha's Vineyard. "Write Through It" is about writing, editing, and how to keep going. She also manages the blogsite for the Women's Committee of We Stand Together / Estamos Todos Juntos, a civic engagement group on Martha's Vineyard.
View all posts by Susanna J. Sturgis →
This entry was posted in Martha's Vineyard, outdoors and tagged Adrienne Rich, Ben Ramsey, fall, Nisa Counter, Sheriff's Meadow Foundation, Travvy, walking. Bookmark the permalink.