Sing All the Way

I was scheduled to participate in two performances on July 28, the fourth edition of “World of the Troubadours and Trobairitz” and the Spirituals Choir’s annual Della Hardman Day concert at East Chop Light. Lyme disease isn’t contagious and my gimpy leg still works, albeit slowly, so no way was I going to fink out of either one.

First order of business, however, was getting my doxycycline prescription filled. Were any pharmacies open on Sunday? Consensus at the ER front desk was maybe Stop & Shop and Leslie’s. Upon arriving in Vineyard Haven, I learned that the Vineyard Haven S&S doesn’t have a pharmacy. Getting to the Edgartown store and back and still making my 2:30 call for the Troubadours program meant risking a speeding ticket, so I hobbled up to Main Street. Leslie’s was open! I got my doxy and a knee brace. A clerk locked the front door behind me when I left. Turns out they close at 2 p.m. on Sunday. My psychic map is expanding. Now it includes pharmacies that are open on Sunday. 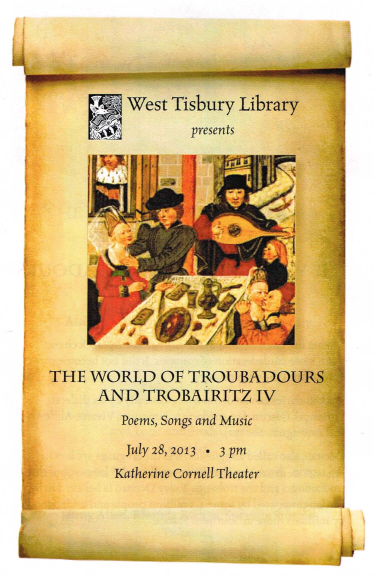 “World of the Troubadours” followed the format of its three predecessors, but each year nearly all the poems and songs in the program are new. Dr. Marisa Galvez, an assistant professor of French at Stanford, introduced the audience to the history and culture of Occitania (now southern France) in the 12th and 13th centuries CE. Her Songbook: How Lyrics Became Poetry in Medieval Europe was published last year by the University of Chicago Press. In the poems that followed, ladies teased their lovers and dissed their husbands; gentlemen beseeched their ladies to be true or at least kind; and reader Jonathan Revere boasted of what he could accomplish if he only had a horse. (The troubadours sang about war as well as love.) 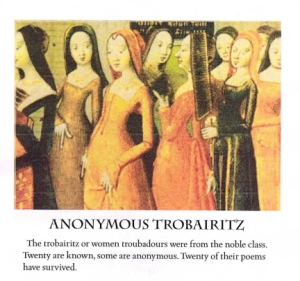 New to the ensemble this year was soprano Emily Culler, an early music specialist with a lovely voice. Returning for the second year was lutenist Rich Maloney. Rounding out the instrumentalists were recorder players Carol Loud, who’s been part of all four Troubadour programs and who also played percussion, and first-timer Fred Hotchkiss. The readers, in addition to Jonathan, were Justen Ahren, John Alley, Beth Kramer, Joe Eldredge, Rhonda Backus, and yours truly. Special kudos to Paul Levine, whose brainchild this was and who brings it to new life every year.

I went home to give Travvy his supper and hang out with him on the deck. Poor puppy hasn’t had any vigorous walks lately. Lucky for both of us, July’s heat and humidity have damped his energy down quite a bit so it’s not like he’s bouncing off the walls.

The big question was whether July’s soggy air would turn to full-out rain, as it had the previous night. I packed my rain slicker and headed for East Chop Lighthouse, which is about as far from my house in West Tisbury as you can get without going to Aquinnah.

We sang to an attentive gathering and sounded, I must say, pretty good, although singing in the open air is always a challenge. Between Jim Thomas’s drumming and Phil Dietterich’s keyboard we managed to stay together. We felt a few sprinkles before the end but not enough to make anyone put up an umbrella, never mind leave.

I’ve been asked, Isn’t it depressing, singing those songs about slavery? No, it’s not. Reading about slavery can be depressing, or infuriating, or both, but singing the songs the slaves created and sang is inspiring, encouraging. That people whose lives literally were not their own could keep singing, and imagining a brighter future, and putting one foot in front of the other — the human spirit is an astonishing thing.

I couldn’t help thinking that with my malfunctioning leg I wouldn’t have been welcome on the Underground Railroad. I didn’t climb to the top of the lighthouse this year either.

As Jim explains, when “angels” appear in the spirituals, it means conductors on the Underground Railroad. If angels were singing out in the woods, it meant the long walk north was about to begin.

Susanna edits for a living, writes to survive, and has been preoccupied with electoral politics since 2016. She just started a blog about her vintage T-shirt collection: "The T-Shirt Chronicles." Her other blogs include "From the Seasonally Occupied Territories," about being a year-round resident of Martha's Vineyard, and "Write Through It," about writing, editing, and how to keep going.
View all posts by Susanna J. Sturgis →
This entry was posted in Martha's Vineyard, music and tagged Della Hardman, East Chop Light, Jim Thomas, psychic map, spirituals choir, troubadours, U.S. Slave Song Project. Bookmark the permalink.

1 Response to Sing All the Way