I can’t say that everything I know I’ve learned from my dog, but Travvy has taught me a lot, and not just about dogs. 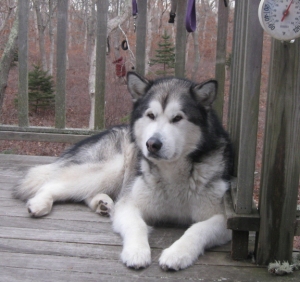 Travvy is reactive. I didn’t know what reactivity was before a dog trainer put a name to what Travvy was doing: going over the top in the presence of other dogs. His hackles came up, his breathing accelerated, he’d pull toward them, paying zero attention to anything I said, even if I offered him treats — it was as though his brain had disengaged and he couldn’t think straight.

A reactive dog overreacts to certain stimuli. The stimuli vary from dog to dog. They might include other dogs, or other dogs of a particular sex or size, or male humans with beards or female humans wearing hats, or horses or toddlers or lawn mowers. A fenced-in dog in my neighborhood starts barking when Travvy and I pass by and is still barking when we’re more than a quarter mile away. That’s reactive. Sometimes a car will pass us on the road with the dogs inside barking madly and trying to squeeze out the open window. That’s reactive.

Trav’s reactivity became apparent toward the end of his first year, around the time his prey drive kicked in. Like many Alaskan malamutes and northern-breed dogs, his prey drive is high. There are outdoor cats and free-range chickens in my neighborhood, so Trav’s free-roaming days were over. On leash, he couldn’t check out other dogs and he couldn’t get away from them. Trav is a friendly guy but not a totally confident one. Restraint made him less confident. So he reacted.

We play on the A-frame at Camp N Pack 2012. Photo by Threepairs Photography.

We’ve done a lot of work on this. I’ve learned to read Travvy’s reactions and to anticipate situations that might stress him out. The goal was always to keep him under his freak-out threshold, where his brain was still in gear and he could pay attention to me. And our work has paid off: Travvy has earned a bunch of Rally Obedience titles in high-stress trial environments. He’s reactive and probably always will be, but he’s also learned to override his instincts and impulses and stay focused on the task at hand, whatever it is.

In the wake of the Boston Marathon bombing, I’ve been thinking that much of what passes for political discussion in the U.S. these days is reactivity. Our brains are stressed, they’re not really engaged, but words keep pouring out of our mouths. If anyone interrupts with a mildly lucid thought, we may turn on them, snarling. Maybe they’ll then growl back. Pretty soon we’ve got a snarl-and-growl fest going on that, hey! now that you mention it, looks a lot like U.S. political discourse.

Some of it’s hateful. A lot of it’s just stupid and/or counterproductive. Most of it stems from over-the-top overload. The stressed-out human brain acts a lot like Travvy’s. The two options it recognizes are fight and flight. Those who can’t or won’t flee start snarling and growling, and pretty soon we’ve got a continuous feedback loop going.

When Trav goes over threshold, my job is to get him out of the situation that’s making him nuts. With most of us humans, it’s our job to get ourselves out of these predicaments, but unfortunately we’re not too good at it. We run toward the snarling and growling, not away from it. Social media, and instantaneous internet communication more generally, make it easier than ever to give in to the snarl-and-growl impulse.

What we really need to do is step back, shut up, and think things through, but how can we possibly do that when, as one Facebook page has it, “there is epic shit happening on the internet”?

Another lesson from dog training: Behavior that’s reinforced tends to continue, and behavior that isn’t reinforced tends to die out. Turn that around and it suggests that if behavior continues, it’s being reinforced — it’s paying off in some way — and if it dies out or doesn’t happen in the first place, it isn’t being reinforced enough. Travvy (on leash, need I say) will walk by a flock of hens for string cheese. If all I’m offering is bits of kibble, he’ll be pulling hard toward those hens.

You see where I’m going with this? Snarling and growling is easy. When the adrenaline’s flowing, stepping back is hard. (For those who get paid for snarling and growling, it’s probably impossible.) Thinking things through is even harder. Our defensive, self-protective, reactive brains have a strong incentive not to admit any information that might make us uncomfortable. Who the hell wants to turn his or her worldview inside out and upside down?

I’m pretty sure we’d all be better off if each of us had a conscientious handler equipped with a clicker, a leash, and an endless supply of string cheese. Unfortunately we aren’t dogs, so I guess we’ve got to learn to handle ourselves.

P.S. If you want to learn more about reactivity in dogs, there’s plenty of info out there. “Managing the Leash-Reactive Dog” is a good place to start.

Susanna edits for a living, writes to survive, and has been preoccupied with electoral politics since 2016. She just started a blog about her vintage T-shirt collection: "The T-Shirt Chronicles." Her other blogs include "From the Seasonally Occupied Territories," about being a year-round resident of Martha's Vineyard, and "Write Through It," about writing, editing, and how to keep going.
View all posts by Susanna J. Sturgis →
This entry was posted in dogs, musing, public life and tagged dog training, politics, reactivity, Travvy. Bookmark the permalink.