In my 11 years (1969–72 and 1977–85) as a resident of Washington, D.C., I never went near an inauguration. The inaugurations that took place during my residency were for Nixon (one) and Reagan (two), which is to say nothing to celebrate for me or for the overwhelming majority of other D.C. residents. In 1972, however, I did boogie in the wake of the inaugural parade as part of a counterinaugural demo. The police threatened to arrest us but no one got busted where I was.

Early this month, the M.V. Democrats sent out email invitations to an “inaugural ball” on the 21st. Potluck desserts and finger foods, dancing to Johnny Hoy and the Bluefish, only $10?  I’m there.

As the date approached, an email reminder went out. This one specified “Vineyard Formal” attire. To me this means “put on a clean pair of jeans,” but suits, dresses, and high-heeled shoes are seen more often on Vineyard streets these days than they were in the not-too-distant past, so I asked a couple of longtime Vineyarders what “Vineyard Formal” meant to them. Reassured that it meant the same thing to them that it did to me, I laid in supplies to make my (in)famous mini cheesecakes. 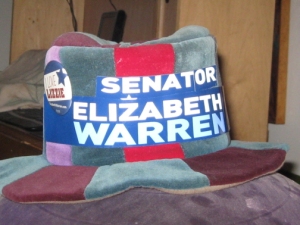 Monday, while the cheesecakes chilled, I redecorated my hat. I listened to President Obama’s inaugural speech: “We, the people, declare today that the most evident of truths —- that all of us are created equal —- is the star that guides us still; just as it guided our forebears through Seneca Falls, and Selma, and Stonewall . . .” He said Seneca Falls? He said Stonewall? He said gay brothers and sisters?

The whole thing was exhilarating. The truths on which the country was founded may be self-evident but they aren’t self-executing, he said. We have the rights we’ve got because people — women, people of color, workers, gay people, disabled people, and all the rest — have fought for them together. And where individuals have accomplished great things, they virtually never did it in isolation. It was this understanding that won me over to Elizabeth Warren’s campaign. I heard it echoed and underscored at the Democratic National Convention, though when professional pols get together to pat each other on the back, I don’t put much stock in their rhetoric. But hearing it in the president’s inaugural address? He’s appealing to our largeness and our strengths, instead of our smallness and our fears. What a difference from what’s gone down in the last 30 years.

While I prepared, the predicted snow was developing outside. Would the ball go on?

Of course it would. A little after seven, I set out for Chilmark. The view through my windshield looked like the starship Enterprise shifting into warp drive. Maybe driving to Chilmark was a stupid idea. There was no one else on the road. Maybe I should have checked for cancellations? It’s January, I reminded myself. There’s never anyone on South Road at this hour.

The Chilmark Community Center was all lit up and Malvina Forester grabbed the last free parking place in the parking lot. Whew. 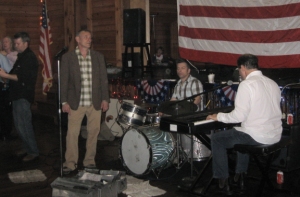 Johnny Hoy and the band

The party was great. I danced more than I had since the 60th birthday extravaganza almost two years ago. Several people dressed a lot more formal than I did, and after dancing for 10 minutes, I had to admit that bare arms and gossamer fabrics were better to boogie in than the clothes that keep you warm working a sedentary job in a 60-degree (F) apartment.

Even President Obama got down and boogied, with a little help from his friends. Some people noted that he looked a little stiff. Others thought he looked thin. I didn’t see him anywhere near the food table: maybe he’s on a diet? 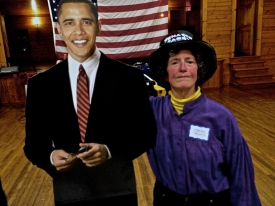 Me and the president. Photo by Adrianne Ryan.

Me and the president, take 2. Photo by Adrianne Ryan.

The Martha’s Vineyard Democrats, hosts of the event, who worked locally for the reelection of the president and the election of Elizabeth Warren gathered for a group photo. I’m told that they tried hard to persuade Elizabeth proxy to co-preside over the party, but it seems that she’s not cut out for it. The cake, I’m happy to report, was not made of cardboard.

Susanna edits for a living, writes to survive, and has been preoccupied with electoral politics since 2016. She just started a blog about her vintage T-shirt collection: "The T-Shirt Chronicles." Her other blogs include "From the Seasonally Occupied Territories," about being a year-round resident of Martha's Vineyard, and "Write Through It," about writing, editing, and how to keep going.
View all posts by Susanna J. Sturgis →
This entry was posted in Martha's Vineyard, public life and tagged Democratic Party, election 2012, Elizabeth Warren, politics, President Obama. Bookmark the permalink.