This started off as a brief intro to Bountiful, Susan Klein and Alan Brigish’s just-published and utterly wonderful history of the Martha’s Vineyard Agricultural Society and its annual fair (which starts Thursday!!). Bountiful is one of the few island-related editing gigs I’ve had over the years. But as I’ve said before, I don’t do “brief” — my little intro demanded a post of its own. Stay tuned for Bountiful . . . 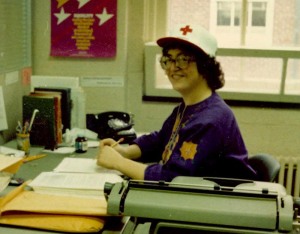 I work full-time as an editor, but I don’t blog much about my work because very little of it has anything to do with living on Martha’s Vineyard. If there were more job opportunities here for people in the word trades, I wouldn’t be freelancing full-time. I love working with capable, competent, interesting people. I’ve had three opportunities in my life to do exactly that — and get paid for it. On two of those jobs, though, I loved the work and my colleagues, but management was abysmal, and sooner or later piss-poor management undermines a team: good people get demoralized and either leave or stick around but pull back in other ways. 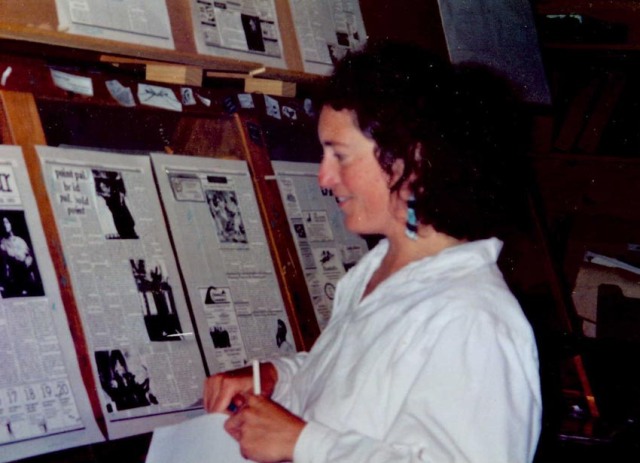 Checking the boards on my last day as M.V. Times features editor, October 1993. Back in the Pleistocene, all copy was cut with Xacto knives and pasted up with wax. Then the editor in chief made a headlong dash to get the boards on the 5 p.m. boat so the paper could be printed overnight and arrive back on MV first thing in the morning.

After several years of odd-jobbing on the Vineyard, I spent two and a half years as features editor of the Martha’s Vineyard Times. Great job, good people — but complete burnout city if you did the job right. Within a year of my departure in late 1993, there were two people doing what I’d done pretty much solo.

I then went to work almost full-time for a local book packager. Desktop publishing was coming into its own: this guy contracted with several academic publishers to produce their books, then subcontracted out the copyediting, proofreading, typesetting, illustrating, and indexing. He subcontracted most of the copyediting and proofreading to me. This fellow’s heart wasn’t in the business, though: what he longed to do was go off and philosophize in the woods, à la Thoreau. He was such a heavy smoker that the (paper) manuscripts I brought home radiated smoke stink. He dissolved the business abruptly, planning to move to New Hampshire, but within a couple of years he was dead of lung cancer that metastasized to his brain, age 51.

About three-quarters of my annual income disappeared with his business, but the idea of freelancing full-time had taken hold. While I tried to get my freelance foot in the door of various New York publishers (this took a long time), I created a little three-panel flyer advertising my services, gave copies to everyone I knew, and mailed it to every business, nonprofit, and government body on the island that might possibly need an editor.

I got plenty of good wishes but exactly zero gigs. Most people who could benefit from editorial services don’t know it. Editing is in essence about making the written word communicate more clearly and more effectively; this often involves clarifying and fine-tuning the thoughts behind the writing. But the idea prevails that it’s just about correcting typos and anyone can do that, right?

Every year, one of my M.V. Times colleagues would volunteer to proofread her town’s annual report for nothing. Every year town officials would say, Yes, yes, great idea, and every year they wouldn’t contact her and the town report would be published with errors. Occasionally a typo in a warrant article or budget item would be serious enough to require amendment at town meeting, but this didn’t bother anyone other than the professional editors and proofreaders among us, along with a handful of true believers who are sure that every typo and usage gaffe is a sign of the collapse of Western Civilization.

I could go on, but what matters is that I realized PDQ that I wasn’t going to support myself as a freelance editor if I depended on local jobs. So I went to work one summer at the old Webb’s Camping Area, then in the fall I persuaded the Martha’s Vineyard Times to create a copyeditor position and hire me to fill it. 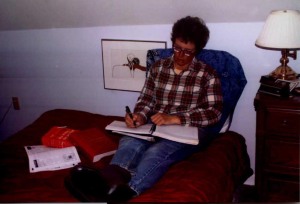 Freelancers can work in bed if they feel like it. In 2006, when this photo was taken, about half my editing jobs were on paper. These days I do more than 90% of them on my laptop, sitting in an easy chair.

By mid-1999, I was getting enough work from publisher clients, both commercial and university presses, to freelance full-time so I left the Times again. In the years since, I’ve had a few island jobs, each of which introduced me to interesting stories and interesting people, but the income from all of them put together wouldn’t have bought me two years’ worth of groceries. Bountiful is hands-down the most handsome of the lot. More about that tomorrow.

The view from my “desk”

Susanna edits for a living, writes to survive, and has two blogs going on WordPress. "From the Seasonally Occupied Territories" is about being a year-round resident of Martha's Vineyard. "Write Through It" is about writing, editing, and how to keep going. She also manages the blogsite for the Women's Committee of We Stand Together / Estamos Todos Juntos, a civic engagement group on Martha's Vineyard.
View all posts by Susanna J. Sturgis →
This entry was posted in Martha's Vineyard, work and tagged editing, freelancing, island economics, Martha's Vineyard Times, publishing, town government. Bookmark the permalink.