A summer’s worth of footwear. Shoes are second from right.

When I was a kid, I thought I’d know I was a grown-up when I started drinking coffee and wearing high heels. It never dawned on me that these were acquired tastes — that they did not happen automatically like, say, breasts, pubic hair, and periods. My mother drank coffee and wore high heels. I, like my father before me, am a morning tea drinker. I did become a recreational coffee drinker in my early thirties, but to this day I’m baffled that anyone would choose to wear high heels if they weren’t being well paid to do so. Since I’m less than a week shy of my 61st birthday, I’ve pretty much given up on growing up, at least in this lifetime.

A few weeks ago the lace on one of my lightweight hiking boots, the ones I wear on my long morning walks with Travvy, started to come apart: the woven exterior peeled back from the core, making it hard to tie. The tying got harder and harder. 72-inch laces aren’t all that easy to find (surprising, considering how many people around here, male and female, wear work boots and hiking boots), and the selection was limited to rawhide, rawhide, and rawhide. I don’t like rawhide, but hey, necessity is the mother of settling for less, so I bought a pair. One snapped the first time I tightened them up. I knotted it and carried on. Within the week it had broken again. I made another knot. Did I say I don’t like rawhide laces? 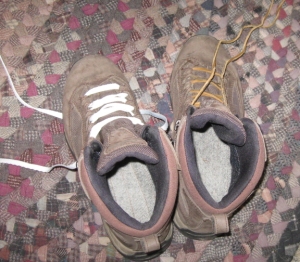 Thursday at up-island Cronig’s I spotted a few 72-inch laces hanging among the 24s, 36s, and 45s. True, they were more suitable for high tops than hiking boots and only came in bright white, but they sure beat the twice-knotted rawhide so I bought a pair. This morning I managed to replace the broken lace but ran out of steam before I got to the other boot. It takes considerable time to thread a lace through four pairs of lugs, even when the lace has aglets. Aglets are the hard cylindrical tips that make laces easier to lace. Rawhide laces don’t have them. The only way to get them through the lugs on my hiking boots was to wrap the ends with Scotch tape. Did I say I don’t like rawhide laces?

Did you know that there’s a whole website devoted to shoelaces? I discovered Ian’s Shoelace Site while resting up after the arduous task of lacing one boot. This is how I can toss words like aglet and lug around like a shoelace pro. Check it out. Ian says that there are two trillion different ways to lace a boot or shoe with six pairs of eyelets but he only illustrates 37 of the more useful ones. As soon as I finish this blog, I’m going to follow the site’s links and see if I can find more interesting laces for my hiking boots.

Plenty of people think shoelaces are too much PITA to deal with and sometimes I agree, like when the crappy rawhide lace broke the first time I tightened it — after I’d wrapped the ends in Scotch tape in order to thread the lace through the lugs. Slip-ons are convenient, but slip-ons tend to stretch with wear and the only way to snug them up again is to wear heavier socks. With laces, footwear continues to fit until it falls apart. Laces will not keep a boot from falling apart, but they will keep it snug across the instep.

Like most devices that hold things together, shoelaces are low-tech. Think about it. Paper clips, clamps, staples, Scotch tape, Band-Aids, wire, baling twine, bungee cords, even Velcro — the only thing digital about them is that they’re manipulated by fingers. They may not make the world go round, but they do make it more coherent.

Susanna edits for a living, writes to survive, and has been preoccupied with electoral politics since 2016. She just started a blog about her vintage T-shirt collection: "The T-Shirt Chronicles." Her other blogs include "From the Seasonally Occupied Territories," about being a year-round resident of Martha's Vineyard, and "Write Through It," about writing, editing, and how to keep going.
View all posts by Susanna J. Sturgis →
This entry was posted in outdoors, technology. Bookmark the permalink.