I’m sad to report that little ducky and (probably) his mama are no more. 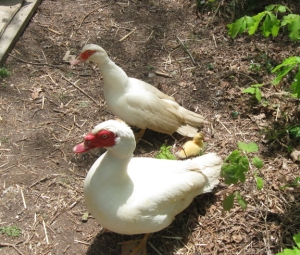 Mama, papa, and little ducky together on Saturday

My next-door neighbors went over to see the ducks yesterday morning. When they returned, they reported that they had seen no ducks at all. Very unusual. I went over to check it out: by the time I got there, papa duck and a couple of the hens were emerging from under the back deck. I looked under the deck, walked around the house and peered under shrubbery, circled the two sheds and the fenced-in garden — no sign of mama or little.

No sign of a struggle either. That was some comfort.

When I returned at T-Beau’s supper time, a little after five, little ducky was back in the enclosure. No sign of mama. Not good.

Around sundown, when there was still plenty of light, I went back to close the hens in their little henhouse — they put themselves to bed at the appropriate hour but are unable to shut the door themselves — and shut the enclosure gate. Still no mama. Papa, who spends nearly all of his time either outside the enclosure or on top of it, was inside with little ducky. I’d been advised that with mama gone, keeping baby warm enough was an issue. Maybe papa’s presence would help? I shut them in together. 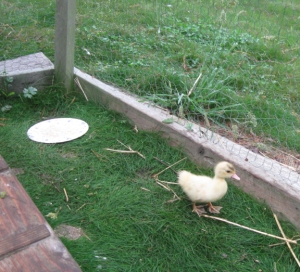 This morning I went over at 6:30 to let everyone out and feed whoever needed feeding. Little ducky was OK but, I thought, awfully alone. More restless than usual, with no mama to settle under. At about quarter to eight, I stopped by with Trav as we headed out on our long a.m. walk. Trav was fascinated by papa duck, who was in his accustomed place on top of the enclosure, and by the two hens inside it. A patch of yellow fluff caught my eye in the green, green grass between the enclosure and the house.

Little ducky was dead. I picked up the little body and put it on the deck railing. I saw no signs of injury; could it just have died, perhaps of the fear and stress of being suddenly alone? No way of knowing. With mama gone and no foster mamas around, its chances of surviving to adult duckhood probably weren’t very good. 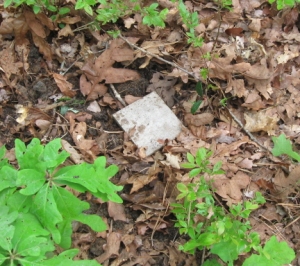 After Trav and I returned from our walk, I went back to the neighbors’. With a garden shovel I dug a little grave at the edge of the scrub near the enclosure gate. The hens clustered around, snatching up bugs and a worm exposed by the disturbed earth. I shooed them away and laid little ducky to rest.

No more Ducky TV, T-Beau, for you or the rest of us. I’m grateful to have been part of your all-too-brief life, little ducky.

Susanna edits for a living, writes to survive, and has two blogs going on WordPress. "From the Seasonally Occupied Territories" is about being a year-round resident of Martha's Vineyard. "Write Through It" is about writing, editing, and how to keep going. She also manages the blogsite for the Women's Committee of We Stand Together / Estamos Todos Juntos, a civic engagement group on Martha's Vineyard.
View all posts by Susanna J. Sturgis →
This entry was posted in Martha's Vineyard, work and tagged ducks. Bookmark the permalink.