A rush proofreading job had to be in New York on Monday. The job was on paper, meaning (duh!) that it couldn’t be sent electronically. UPS, my usual overnight carrier, doesn’t ship on or off the island on weekends (and I wasn’t done in time to make the 3 p.m. cutoff on Friday), but USPS’s Express Mail does go out on Saturdays. The latest deadline for Express Mail is 1 p.m., when the window closes at the Vineyard Haven post office.

Which is where I was at about 12:40 yesterday afternoon, sliding the proof pages into a Tyvek envelope and filling out the shipping form.

The Vineyard Haven p.o. can be pretty hairy on a Saturday morning, with the line snaking from the counter around the center island and down the hall toward the mailboxes. This snaking is mirrored out in the parking lot, which the post office shares with Cumby’s, Cumberland Farms, the convenience store that doubles as a stage for the Vineyard’s best after-hours weirdness. People despair of finding a parking place (thanks in part to all the motorists who stash their vehicles here while doing their errands elsewhere in town), so they stop any old where and leave their engines running while they run inside. 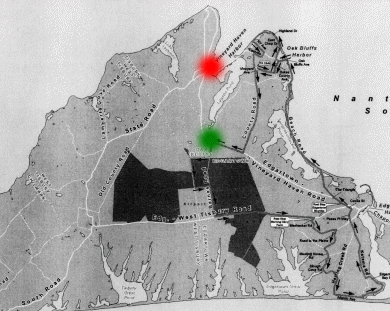 Five Corners lies under the red dot. The green dot marks the blinker intersection, where we don't want no stinkin' roundabout.

On top of all that, the Vineyard Haven post office is located at beautiful Five Corners, the island’s most notorious intersection — the place where a roundabout might not be a bad idea. The Steamship dock is just a few dozen yards away, and all traffic bound to or from the ferries has to pass through Five Corners. To exit the p.o. parking lot, so do most postal and Cumby’s patrons, especially if they’re bound for Oak Bluffs. The island-savvy driver will turn right instead of left and escape the back way, up Skiff Ave. to the Edgartown Road. Mileage-wise, it’s almost three times farther if you go that way to OB, but when the traffic’s bad in summer it can take less time and cause you a lot less hassle.

At 12:40 on an early February afternoon, neither the parking lot nor the post office was crowded. “Are they gonna occupy the post office?” wondered the guy just ahead of me in line. I looked out the door: eight or ten people, bundled up in fleece or down, were standing at Five Corners holding signs. A clerk asked if they were on government property. We said no.

Five Corners is the island’s default demonstration site. On paper this makes some sense: it’s nothing if not centrally located, and the Martha’s Vineyard Times office is just a stone’s throw up the Beach Road. In practice it’s lousy. Acoustics are terrible, thanks to the traffic: speakers and even multi-voice chanting is only audible a few feet away, which means that music is pretty much out. Music is close to crucial for raising energy at demonstration, so it’s no surprise that Five Corners demos tend to be, well, boring. The only exception I can remember is the one got up in the early 1990s in defense of Diarrhea Roses, the Vineyard’s own ingenious grunge band. The signs! the costumes! the chants! That one was a hoot.

This one wasn’t. It was organized by OWS MV, aka Occupy Wall Street Martha’s Vineyard. Among the signs was an island perennial: WAR IS NOT THE ANSWER. Another, homemade, said OCCUPY PEACE. Whazzat mean? I thought about opening the window and yelling “Occupy the Chamber of Commerce!” as I drove through the intersection, but I was too lazy and I figured either they wouldn’t hear it or they wouldn’t get it if they did. 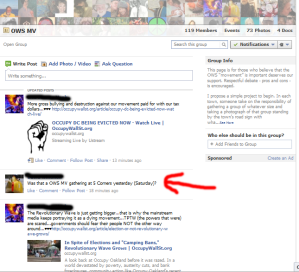 Back in November, in “99%,” I set down some of my reservations about the Occupy Wall Street movement — less about OWS itself than about its privileged, middle-aged cheerleaders. These haven’t changed, and they apply in spades to OWS MV. Its Facebook page consists of one link after another to protests in Washington, New York, Oakland — virtually nothing to link OWS to MV, where income inequality isn’t exactly a foreign concept, not to mention all those houses that are unoccupied eight or ten months of the year.

Last week the most exciting news to blip my radar was the huge backlash against the Susan G. Komen Foundation’s decision to “de-fund” Planned Parenthood. I posted this on my Facebook page:

Exhilarated by the backlash against the Komen foundation. Note to OWS people: The problem is bigger than your 1%. Women are still fighting for the right to occupy our own bodies.

Rather than post something similar on the OWS MV page, I decided to wait and see if anyone else mentioned it. So far, no one has.

I just finished reading Kathryn Stockett’s The Help. Yeah, I know: a movie’s already been made of it, and I just got around to reading the book. The Help is about the coming of the civil rights movement to Jackson, Mississippi, in the early to mid-1960s, but none of the novel’s many major and minor characters occupies a lunch counter, sits at the front of a bus, or goes to Washington to march with Dr. King in August 1963. (Some of them do watch the march on TV, however.) Most of the novel takes place in private homes, especially in the kitchens. Through the interactions of a varied cast of characters, black and white, mostly women but with a few men in supporting roles, Stockett does an amazing job of showing how change happens at the personal, interpersonal, and community level.

Susanna edits for a living, writes to survive, and has been preoccupied with electoral politics since 2016. She just started a blog about her vintage T-shirt collection: "The T-Shirt Chronicles." Her other blogs include "From the Seasonally Occupied Territories," about being a year-round resident of Martha's Vineyard, and "Write Through It," about writing, editing, and how to keep going.
View all posts by Susanna J. Sturgis →
This entry was posted in Martha's Vineyard, public life, writing and tagged Facebook, Five Corners, Occupy Wall Street, OWS MV, The Help, Vineyard Haven. Bookmark the permalink.