These public hearings bring out my inner schoolkid, the one who couldn’t resist whispering during class, passing notes, and occasionally wadding up a bit of candy wrapper, stuffing it into the end of a straw, and shooting it at the kid in front of her. It seems others are having similar flashbacks. At the MVC (Martha’s Vineyard Commission) hearing last night on, you guessed it, the roundabout proposal, a town official who shall remain nameless was passing this (see right) out in the back row. If only Trip Barnes’s big truck could snake around small circles like that.

Video producer John McCormick had edited a shorter version of the Stop the Roundabout video, with additional footage featuring Craig Hockmeyer and his bicycle, but despite prior planning the MVC staff couldn’t come up with equipment capable of playing it. Hopes for a world premiere of the revised version were thus dashed, but a DVD has been submitted as part of the “written” record.

Originally the MVC planned to close the public hearing (which began on September 1) at 5 p.m. yesterday, meaning that public testimony would not be accepted at last night’s meeting. Then word went around that yes, public testimony would be accepted. This suggested that new information had come to the MVC’s attention since September 1. What information? we wondered. Were we going to be subjected to a “new” version of the GPI spiel we’ve already been subjected to twice?

No, indeed. Instead we heard a clear, well-informed presentation by Angie Grant, administrator of the Vineyard Transit Authority (VTA). Currently three VTA bus routes make regular stops at the blinker intersection. The intersection is a key transfer point for passengers heading or returning from up-island. The MVC staff — “without any prior consultation with the VTA,” Grant noted in written testimony — had proposed relocating the bus stops to the high school, four-tenths of a mile away. This would add almost a mile to the trip and play havoc with the VTA’s finely synchronized schedule, which makes transfers prompt and predictable. And since the VTA works on a “flag” system — riders can flag down a bus and request to be let out between regular stops, as long as the driver has a safe place to pull over — the buses would most likely be stopping at the intersection anyway.

Grant’s letter and oral presentation, made at the 11th hour, underscored how little Oak Bluffs (“the Applicant”), GPI, and the MVC have done to solicit input from those likely to be most affected by the proposed roundabout. Once again Trip Barnes vividly (despite the absence of the video) called the MVC’s attention to the challenges the roundabout’s drawbacks for large trucks: the Edgartown–Vineyard Haven Road is a main truck route, one of the many specifics about the site that GPI has not addressed.

And this brings up the most interesting, possibly portentous aspect of the hearing: John Diaz from GPI and Tom Currier from MassDOT weren’t there. Earlier in the week, an MVC staffer told me in an e-mail that he thought they would be. Not only that, they hadn’t responded to questions submitted to them earlier this month — we had to get our questions in by September 8 so they would have time to come up with answers by September 22. And not only that, several commissioners seemed to be getting just a bit annoyed with the lack of response. The hearing chairman emphasized that the MVC can request information, but it can’t go out and gather it, e.g., conduct traffic studies. The commission, like a jury, has to make its decision based on the information available to them.

Well. Far be it from me to interpret the statements of the commissioners, but I heard more ambivalence, more impatience, and more critical comments at this meeting than I heard at the previous two. I walked out of the meeting room on the brink of guardedly optimistic.

The written record for the public hearing is being kept open till noon on Monday, October 3, to give GPI and MassDOT time to answer the questions put to them. Later that day, at 5:30 p.m., the project will move on to the next phase: discussion by the land use planning committee (LUPC), which comprises any commissioner who wants to be part of it. The LUPC will then make a recommendation — approve, approve with conditions, disapprove — to the full MVC, which will then vote on it. 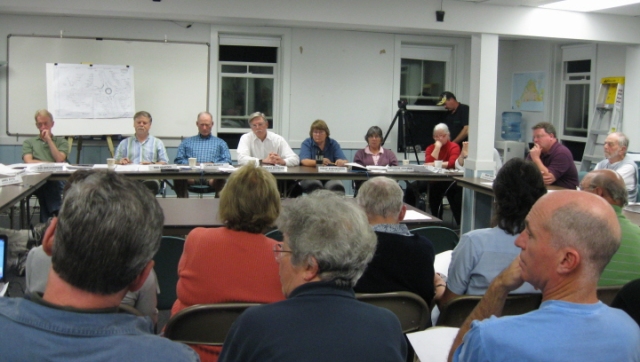 The three heads in the foreground belong to, from left, Trip Barnes (trucker), Sandra Lippens (owner, Tilton Rentall), and Craig Hockmeyer (bicyclist). About two-thirds of the MVC is visible in the background.

Susanna edits for a living, writes to survive, and has two blogs going on WordPress. "From the Seasonally Occupied Territories" is about being a year-round resident of Martha's Vineyard. "Write Through It" is about writing, editing, and how to keep going. She also manages the blogsite for the Women's Committee of We Stand Together / Estamos Todos Juntos, a civic engagement group on Martha's Vineyard.
View all posts by Susanna J. Sturgis →
This entry was posted in Martha's Vineyard and tagged MVC, roundabout, Trip Barnes. Bookmark the permalink.

1 Response to The Hearing Continues