Bookstores Are Not Sacred Cows

I was a bookseller before I moved to Martha’s Vineyard: book and magazine buyer for Lammas, D.C.’s feminist bookstore. One of the best jobs I ever had. Books are the only thing I can imagine selling in good conscience. Like many independent bookstores, Lammas was a hub of its community, the place where you could find out what was going on around town. In between ordering, shelving, and talking about books, we referred women to female doctors, therapists, carpenters, printers, and mechanics (etc.). New arrivals called us to find out where the women’s bars and gay-friendly restaurants were.

At this time of year, we held our annual anniversary sale: a major event on the community calendar. Lammas Bookstore was founded at Lammastide in 1973. In the pagan calendar, Lammas is the cross-quarter day that falls between the summer solstice and the fall equinox, on or about August 1.

Like many feminist bookstores, Lammas was founded on a shoestring (the figure $300 sticks in my mind; even in 1973, this was not much) and was seriously undercapitalized. Thanks to excruciatingly tight inventory control, we managed to pay our bills, though almost never on time. Despite the financial pressures, we tracked down and special-ordered books for customers. I read trade journals; feminist, gay, and progressive publications of all sorts; and every flyer we got in the mail, always on the lookout for underpublicized, overlooked titles that belonged on our shelves. To me this was, and still is, what a good independent bookstore does.

Like so many indy stores, Lammas didn’t survive the rise of the big chains. It died around Y2K. Too late many readers realized that the deep discounts that made the chains so attractive came at a price. Buying decisions for most chain stores were made at corporate HQ and based mostly on statistics, not on the interests of the local book-buying market. Special-order a book? Deal with a publisher that only puts out three or four books a year? Forget it. It’s not cost-effective.

For years I carried a torch for independent bookstores on general principle.

Then my novel, The Mud of the Place, came out in the fall of 2008. A pretty good novel about Martha’s Vineyard by a longtime island resident, with enthusiastic blurbs by the likes of Karen Joy Fowler, Susan Klein, and Cynthia Riggs — island bookstores would be all over it, right? Wrong. Bog Books (not its real name but you can figure it out) didn’t want to carry it at all but finally did stock a few copies. The other bookstore carried it because I wholesaled it to them, buying books from the printer at the publisher’s discount. Neither bookstore ever showed any interest in hosting a signing or a reading. When either held an event featuring “island authors,” I was never — I mean never — invited.

I’m still flabbergasted. Why the lack of interest? Bog Books treated Cynthia Riggs and the late Phil Craig like real authors, but they write mysteries (I don’t) and all their main characters are straight (mine aren’t). Both Phil and Cynthia had New York trade publishers; Mud‘s publisher, Speed-of-C Productions, is a small press in Maryland that specializes in science fiction. But Mud is easy to order through a major book distributor. I still don’t get it.

Lately, however, a Vineyard writer I know has had a hard time getting the time of day from Bog Books. His book, a biography, is due out soon from a prestigious university press. He’s offered to wholesale it to Bog (something he should not have had to do), and last I heard, they were still dragging their feet. Another friend just told me of an author she knows, an Oak Bluffs summer resident, who’s got a book just out from another university press: Bog isn’t interested in him either.

I hope Bog Books wakes up and starts paying attention to island authors whose books are well worth stocking and celebrating. If they choose to do otherwise, they might consider amending their recent ad along these lines: 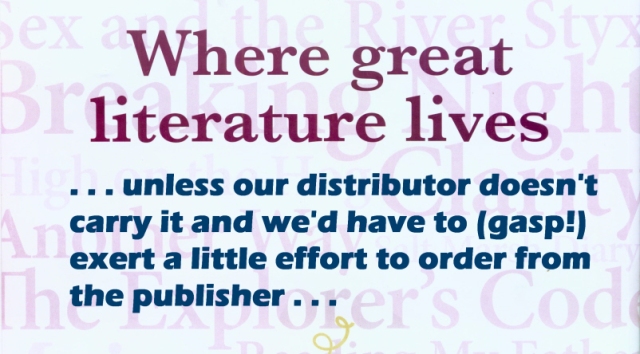 Susanna edits for a living, writes to survive, and has been preoccupied with electoral politics since 2016. She just started a blog about her vintage T-shirt collection: "The T-Shirt Chronicles." Her other blogs include "From the Seasonally Occupied Territories," about being a year-round resident of Martha's Vineyard, and "Write Through It," about writing, editing, and how to keep going.
View all posts by Susanna J. Sturgis →
This entry was posted in Martha's Vineyard, writing and tagged Bog Books, Lammas Bookstore, Mud of the Place. Bookmark the permalink.

2 Responses to Bookstores Are Not Sacred Cows