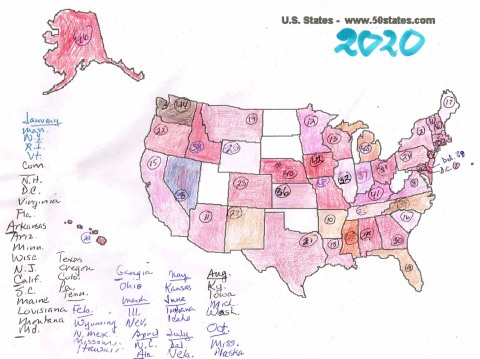 The map at the very end of 2020 looked exactly as it did at the end of October. Missing were West Virginia, Oklahoma, Utah, Wyoming, and (surprise, surprise) both Dakotas. This isn’t bad for a year-end tally. In fact, it’s refreshingly normal for a year that was anything but.

The last outlier to appear in the #2 spot was Louisiana, which in 2014 I spotted in a summer resident’s driveway on my first round-the-neighborhood walk of the new year. I marked it on the list with an exclamation point. Those particular summer residents are from New York, and what Louisiana was doing in their driveway on January 1 I never learned.

A Facebook friend from another midwestern state wondered why Massachusetts and/or the Vineyard was allowing people in from Iowa, given the hypocrisy of Iowa’s U.S. Senator Joni Ernst, who after downplaying the seriousness of Covid-19 was among the first in line to get the vaccine. This would apply to quite a few other states whose registered vehicles frequent Vineyard roads. Florida, whose plates are almost as common here as those of the other New England states, might head the list.

Florida, however, was not among my top 10 for 2021. They are, in order, Massachusetts, Iowa, Connecticut, Virginia, New York, Rhode Island, New Jersey, Maine, New Hampshire, and Texas. Last year, Maine, at #17, barely made the top 20, and Vermont hasn’t shown up yet, but the year is very, very young.

Susanna edits for a living, writes to survive, and has been preoccupied with electoral politics since 2016. She just started a blog about her vintage T-shirt collection: "The T-Shirt Chronicles." Her other blogs include "From the Seasonally Occupied Territories," about being a year-round resident of Martha's Vineyard, and "Write Through It," about writing, editing, and how to keep going.
View all posts by Susanna J. Sturgis →
This entry was posted in license plates and tagged COVID-19, license plates, State Road, West Tisbury. Bookmark the permalink.