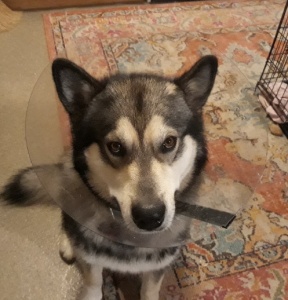 The cone is barely visible, but Tam’s expression is pretty clear. This was taken shortly after he came home from the vet’s.

Tam Lin got neutered, aka “fixed,” last Tuesday. He’s doing fine. He doesn’t like being a conehead, although he does put up with it. I take it off when we go out walking or driving, and I often leave it off at home, since the cone makes it hard to navigate the close quarters of our studio apartment. I can keep an eye on him to make sure he doesn’t lick or worry at his stitches. When I’m distracted with work or cooking, the cone goes back on.

Both Travvy and Rhodry before him got neutered at a younger age, around 7 or 8 months. Tam will hit 21 months on the 20th of this month — the eve of the winter solstice. With Trav I did a fair amount of research before deciding whether and when to neuter. With Tam I did some more reading and picked the brains of dog friends I respect; the general feeling was that if you could wait till the dog was physically full grown, that was best.

Around Tam’s first birthday, I started thinking that the time had come. He’d been good playing with other dogs at the dog park in Vineyard Haven — till he and another male dog took a disliking to each other. Fortunately Tam was leashed at the time so there were no ill effects. But after that we only went to the dog park when no one else was there, or when he could have the small-dog section to himself. However, Covid-19 arrived in force right around that time, putting all non-essential vet surgeries on hold.

Not to mention we were in the run-up to the most important election of my lifetime, and I was paying off a large dental bill . . .

After we got past the election — well, thanks to the antics of the current president and his party, we still aren’t really past it, and even though the Electoral College votes today, December 14, its repercussions are likely to be roiling the waters for a while yet — I got down to business. My regular vet has a small practice out of her home, so Covid-19 restrictions have made it difficult to maintain a full schedule, so she recommended the larger Animal Health Care. I made an appointment and last Tuesday the deed was done.

Puppy Travvy was a conehead after he got neutered. He quickly figured out how to flip his food bowl into the cone to get my attention.

Tam got plenty of sympathy when I posted his conehead photo on Facebook. One FB friend noted that neutering dogs was illegal in Norway. I hadn’t known that, so I Googled and turned up this article from 2011. Indeed, neutering dogs is illegal unless there’s a compelling health reason. One government animal welfare official noted, however, that neutering is allowed for cats because “they wander freely on their own and this can lead to homeless kittens, which in turn is an animal welfare problem.” Norway, she said, “has no stray dogs.”

When I was growing up, male dogs were rarely neutered and female dogs almost always were. Dogs roamed loose in my neighborhood, so I suspect that the difference had a lot to do with the fact that it was the owners of unspayed females who would get stuck with, uh, unplanned puppies, and who would have to deal with intact males hanging around when the female was in heat.

On Martha’s Vineyard when I arrived, loose dogs were less common, not least because plenty of people keep livestock and/or fowl and as in any other rural or semi-rural area, livestock keepers have the right to shoot any dog hassling their animals. By the time my Rhodry was born, in December 1994, the question about neutering was when, not whether. I don’t remember doing much research with him, but when Travvy came along, I did a lot. Nearly all of it was “on one hand . . . on the other hand”: it didn’t offer clear advice one way or the other. Not unusual when you’re trying to apply the findings of scientific studies to your particular dog.

This helps explain why the debates about neutering so often take on a religious fervor: all sides have evidence on their side but the evidence is not conclusive. In addition, neutering has become something of an orthodoxy among rescue groups and shelters, and like just about every other orthodoxy, it’s generated an anti-orthodoxy of people who strenuously disagree. (I hear some echoes of that in the statements of the Norwegian animal welfare official in the article linked to above. The vets quoted seem to have a more practical take on the matter.)

Over the years, more dog-owning men than dog-owning women in my circles of acquaintance have expressed discomfort with the practice of neutering male dogs, so I’m guessing there might be some identification going on. 😉

At any rate, I’m comfortable with my own choices. I don’t expect neutering to make big changes in Tam’s behavior, though I do hope it will somewhat curb the instincts related to testosterone. He’s going to be fine — he was pretty much fine as soon as he came home, and he doesn’t get why I want him to stop doing zoomie circles at the end of his leash.

I do think we could use better terms for “the procedure.” Tam hasn’t been neutered in the sense of nullified or weakened, no way. He hasn’t been fixed either, because he was never broken. But I keep using those words anyway, because de-balled is never going to catch on.

Susanna edits for a living, writes to survive, and has been preoccupied with electoral politics since 2016. She just started a blog about her vintage T-shirt collection: "The T-Shirt Chronicles." Her other blogs include "From the Seasonally Occupied Territories," about being a year-round resident of Martha's Vineyard, and "Write Through It," about writing, editing, and how to keep going.
View all posts by Susanna J. Sturgis →
This entry was posted in dogs, Martha's Vineyard and tagged COVID-19, dogs, election 2020, Facebook, Norway, Rhodry, Tam Lin, Travvy, veterinary care. Bookmark the permalink.