I just read Isabel Wilkerson’s new book, Caste: The Origins of Our Discontents. Like her first book, The Warmth of Other Suns, it’s a mind expander. Did you know that in establishing their diabolical caste system, the Nazis looked for guidance to the laws of the Jim Crow South? I didn’t either.

But it’s not just the book’s information that makes the book so gut-level important to me. It’s the way it focuses what I’ve been learning all my adult life, especially the revelations that started to crescendo around the time Barack Obama became president and have become overwhelming during the Trump administration. Out of those insights came the words I wrote on my sign for this past Saturday’s Black Lives Matter rally at Five Corners: 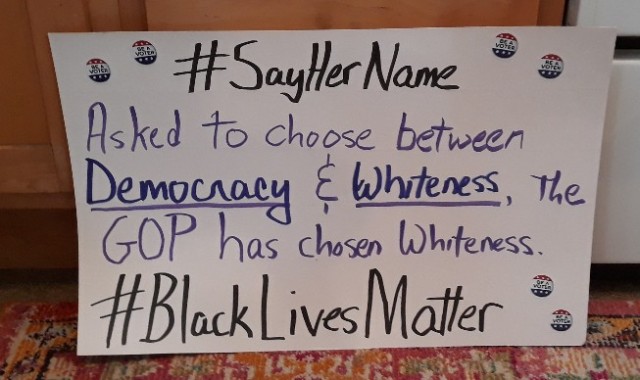 Growing up in Massachusetts I was sheltered from what began to happen in the rest of the country with LBJ’s signing of the Civil Rights Act of 1964 and the Voting Rights Act of 1965. President Johnson famously said — or, rather, is famously said to have said — after the signing of the former that “we [the Democrats] have lost the South for a generation.” Whether he said it or not, subsequent decades proved him right but overoptimistic: it’s been two generations, going on three and still counting.

Much has been made of the 53% of white women who voted for Trump in 2016. It’s actually worse than that. Notes Isabel Wilkerson: “Lyndon Johnson was the last Democrat to win the presidency with a majority of the white electorate.” Even southerner Jimmy Carter only got 48%. Bill Clinton got 39% in 1992 and 44% in 1996. I don’t believe Democrats have done half enough to acknowledge where their power is coming from.

I only registered as a Democrat in January 2017. Asked my political affiliation, I’m apt to respond with “feminist,” not “Democrat. But a few individuals notwithstanding, the anti-choice GOP was no place for a feminist. Being white, it took me longer to figure out it had become such a refuge for people who equated “American” with “white.” Me, I’m choosing democracy.

Here are a few images from Saturday’s rally. Names dominate so many of our signs because the saying of names is so important. Names have power. Names make it real. 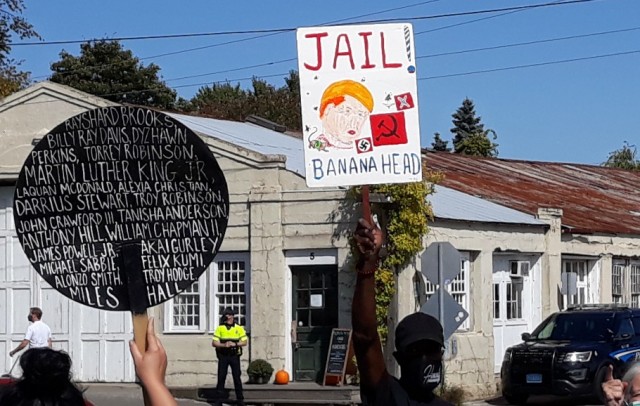 Note that the peace flag is flying from a fishing pole.

Finishing up the banner after the rally has started

Susanna edits for a living, writes to survive, and has been preoccupied with electoral politics since 2016. She just started a blog about her vintage T-shirt collection: "The T-Shirt Chronicles." Her other blogs include "From the Seasonally Occupied Territories," about being a year-round resident of Martha's Vineyard, and "Write Through It," about writing, editing, and how to keep going.
View all posts by Susanna J. Sturgis →
This entry was posted in public life and tagged Black Lives Matter, election 2020, Five Corners, Isabel Wilkerson, politics, racism. Bookmark the permalink.