Voting in the Age of COVID-19

For the first time in anyone’s memory, and maybe the first time ever, West Tisbury held its annual town meeting (ATM — and yes, cash gets dispensed here, but not the way you non–New Englanders may be thinking!) in another town.

On Tuesday, June 23. Five of the six island towns usually hold their ATMs in April; Aquinnah is always the last, in early May. This year they were all held in June. 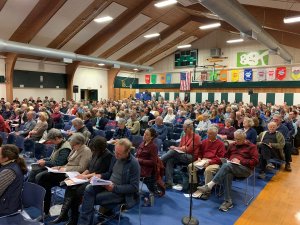 COVID-19 has played havoc with town meeting season. Take a look at what West Tisbury’s ATM looked like in 2019: see the problem?

Upwards of 300 voters generally turn out for our annual town meeting, which is held in the West Tisbury School gym. In the age of COVID-19, large indoor gatherings are contraindicated, period, and no way could a quorum be accommodated in that space.

Not to mention, the COVID-19 situation had been developing rapidly since mid-March, when the commonwealth shut down all but essential services and shelter in place became a way of life. When would it be (relatively) OK to hold town meeting? How could it be done (relatively) safely? If you’ve ever been to a Vineyard town meeting, you’ll know that the median age of participating voters is probably over 60.

Town officials were also up against a deadline. Allocating town funds is a major part of every ATM, the current fiscal year ends on June 30, and the town’s FY 2021 budget has to be in place by July 1. The commonwealth’s phase 2, calling for a limited reopening, began on June 8 (which happens to be my birthday), and that’s when Town Meeting Season 2020 began: Chilmark, the second-smallest island town, held its ATM on the basketball court at the Chilmark Community Center.

Outdoors was the way to go, with or without tents. Tisbury and Edgartown held their ATMs on their respective school fields. Both Oak Bluffs and West Tisbury held theirs at the Tabernacle, the centerpiece of the Campground in Oak Bluffs, a week apart. The Tabernacle has a roof but the only wall is the one behind the stage.

A bill was passed by the legislature and signed by the governor allowing towns to reduce their quorums (quora?) to no less than 10% of the usual quorum. West Tisbury’s usual quorum (the number of voters who have to be present for business to be transacted) is 120 — 5% of the electorate. For this ATM it was reduced to 30. The number who actually participated was 115.

Town officials did a great job of arranging the ad hoc venue to accommodate social distancing. The Tabernacle seats people on benches. Every other row was blocked off, and in the rows that remained, a social distance of about six feet was Xed out with tape to indicate where we shouldn’t sit.

Microphones were set up in each aisle, with someone sitting by to wipe down the mic after each speaker. Masks block the transmission of the coronavirus, but they also muffle the spoken word, so when we addressed the moderator, we dropped our masks. (Logging in voters on election day, I noticed that masks — which everyone was wearing — made it harder not only to recognize people you knew but also to distinguish consonants at the beginning of names.)

It took less than two hours — about half the usual time — to deal with the warrant, which had been stripped down to focus on essential financial issues.

For me (and for a few others, as I’ve discovered in conversations since), the highlight of the meeting was  Cindy Mitchell’s reading of the Diversity Statement passed by the selectboard earlier this month.

Our town election was held on Thursday. Town clerk Tara Whiting-Wells and her team did a great job of adapting our usual polling place, the Public Safety Building on State Road, to the demands of the age. Instead of using the side door, we entered through the garage bay, allowing us to see our fire engines up close and personal. Check-in was in the hallway; on the usual check-in table just inside the door of the meeting room were a stack of ballots and a supply of pens. You could bring your own pen but they had to be “any color but red,” because the voting machine seems to be color-blind for red. 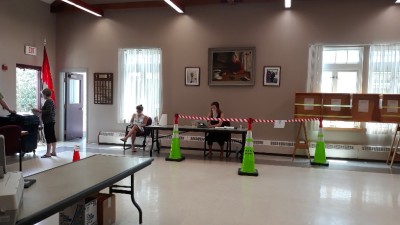 The check-out table seen from the entrance door. Voting booths on the right, ballot box just visible by the exit door on the left.

In normal times there are two poll workers each at the check-in and check-out tables, divvying up the alphabetized voting roster between them. This year one person at each table dealt with everybody. (This was also true at town meeting.) People maintained social distance when waiting in line, but — as usual in town elections — the lines were minimal. Two of every three polling booths were blocked off.

About 400 people voted, including absentee and early voters, 15.35% of the 2,605 on the voting rolls at the end of 2019. This is about par for the course for a town election with only one contested race on the ballot, but for statewide and national elections our percentage turnout is generally in the 70s. We could, in other words, do better, both in turnout and in the number of contested races.

Why those green cones were labeled CHAPPY FERRY is anyone’s guess; Tara knows but wasn’t telling. It seems that West Tisbury’s town election, like our town meeting, was a multi-town effort.

Susanna edits for a living, writes to survive, and has been preoccupied with electoral politics since 2016. She just started a blog about her vintage T-shirt collection: "The T-Shirt Chronicles." Her other blogs include "From the Seasonally Occupied Territories," about being a year-round resident of Martha's Vineyard, and "Write Through It," about writing, editing, and how to keep going.
View all posts by Susanna J. Sturgis →
This entry was posted in public life and tagged M.V. Camp-Meeting Association, Oak Bluffs, politics, the Tabernacle, town government, town meeting, voting, West Tisbury. Bookmark the permalink.

2 Responses to Voting in the Age of COVID-19