We’ve been living with stay-at-home orders for more than a month now, and what I’ve realized is that I’m pretty much a stay-at-home person.

Except when I’m not.

I still work from home. I still take Tam out early so he can do his business (which usually includes racing through the woods several times in a big circle), go for a long walk in late morning, then stroll around the neighborhood in early evening, when it’s sometimes dark enough to wear my headlamp. I still do all my own cooking. Even in normal times, I rarely eat out. The only change there is that I no longer meet friends for the occasional breakfast, lunch, or coffee at the Black Dog Café.

Meetings of various kinds are still happening, but not the way they used to. More about that in a separate post. Suffice it to say here that I’m not yet a Zoom expert, but I’ve advanced well beyond the novice stage and now have my own paid Zoom account.

As discussed at some length in “Culinary Miscellany,” the big changes in my life have been around shopping, mostly but not entirely grocery shopping. Up-island Cronig’s, which I can walk to in 20 minutes, remains closed, so I’m not relying in it for fill-in-the-gap grocery runs. A few of my staples have grown scarce, like I haven’t seen long-grain brown rice on the shelves at either down-island Cronig’s or Reliable, and the co-op hasn’t had it either. The co-op does have short-grain brown rice, and a wild-and-brown-rice blend, so I’ve switched to those. The beans I use most often are hard to find too, in both their dried and canned forms, so when I do find them, into the cart they go. 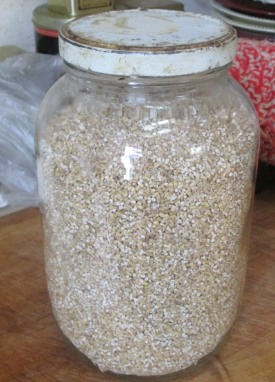 Oat groats in a 5-pound jar

For me at the moment, luxury is having 10 pounds of oat groats in the cupboard. Usually I buy one or two pounds at a time from the bulk bins at up-island Cronig’s, but up-island Cronig’s is closed and the bulk bins are gone from the down-island store. Oat groats — with which I make my morning oatmeal — aren’t especially popular at the co-op either, so when I had the opportunity to score 10 pounds at once, I grabbed it.

You now need to be wearing a mask, or at least a face covering, to go into down-island Cronig’s or the Stop & Shops in Vineyard Haven and Edgartown, per order of the boards of health in those two towns. I didn’t realize this when I last visited Cronig’s, but the health agent at the door let me in when I pulled my turtleneck up over my nose and mouth. Many more people are wearing non-medical masks than were two weeks ago.

I had mixed feelings about this, and about boards of health dictates in general, but the last time I went into Reliable, where masks are not required, I rigged up a face covering with a bandana folded around a doubled-over coffee filter. Non-medical face coverings may be of limited use, but if they make the store staff on the front lines of the pandemic more comfortable, that’s a big plus.

I have, however, been won over to mask wearing, because Crooked Media is now selling a three-pack of non-medical masks for $20 plus shipping. Each mask has a message printed on it: THIS WAS PREVENTABLE, SUPPORT HEALTHCARE WORKERS, or VOTE! VOTE! VOTE! and the three-pack contains one of each. They’re made from recycled sweatshirts, and proceeds go to Crooked’s COVID-19 fund. I’ve ordered a set. You can too.

The first person who tells me I’m politicizing the pandemic is going to get an earful.

Earlier this month Tam’s kibble supply was running short. In bygone days, when I needed dog food, I’d stop by SBS, the grain, gardening, and pet supply store, go to the cavernous back room where all the bulk bags are stacked on metal shelves, shoulder a bag of 20-pound bag of Entrust puppy food (does Tam still qualify?), and take it to the register, often picking up a toy or a treat en route. Two weeks ago SBS still had walk-in hours in the morning, but I was a little late for that, so I called in my order and wrote a check for the total amount before I left home. When I drove round back to the loading dock, the bag was waiting for me. I gave my check to the clerk and hit the road. Walk-in hours are no longer, but you can call in your order for feed, gardening supplies, etc., and have it delivered out front.

Another change: In early April, Cronig’s was already prohibiting bring-your-own bags (I’ve been bringing my own for years and keep a stash of cloth bags in the back of the car), but Reliable let me bring my own bag as long as I filled it myself. No longer. BYO bags are now verboten per order of the governor. This past Tuesday, my purchases were bagged in plastic. The irony here is that single-use plastic bags were banned last year. Now they’re back, and I’m not all that unhappy about it because I used to use them for wastebasket liners and I ran out months ago.

By the way, it’s been four weeks since I got $60 from an ATM, and two of those three $20 bills are still in my wallet. The third went for quarters to do laundry with. Martha’s Vineyard is the kind of place where cash, and checks, still circulate in normal times, but in these abnormal times I’m reaching for plastic to cover those small amounts I would previously have paid for with paper. Ordinarily I don’t think too hard about where those dollar bills have been before they get to my wallet, any more than I think too hard about where Tam’s tongue has been before he licks me in the face.

One last thing: Has anyone else noticed that the objects they depend on most waited till all the non-essential shops closed to really screw up? Malvina Forester makes a strange rattling sound when I turn the key. It stops after a few seconds but it definitely doesn’t sound right. Auto mechanics are considered essential services, but I’ve been holding off because social distancing and, well, Malvina is so disheveled these days she looks like a breeding ground for all sorts of diseases. Tomorrow I’m calling my mechanic.

Tam checks out Kore. Need I say this was a while ago, like last June. Tam has grown. Kore has just gotten sticky.

Kore, the laptop on which I do all my work and a lot of my play, has had a sticky keyboard for some time. She’s been getting slower and slower, which isn’t all that surprising because she’s 4 1/2 years old. She’s probably due for replacement, but first I wanted to see if anything could be done to speed her up, and if it could, I’d spring for a deep keyboard clean. I put this off, however, because I’ve got a whopping dental bill to pay off. Then came the stay-at-home order, and almost immediately afterwards Kore’s ALT key stopped working.

If you don’t use Windows and if you don’t rely heavily on keyboard shortcuts, you probably don’t realize what a disaster this is.

I put up with it for a while. The tech department at Edu-Comp is only open to those with service contracts, and while the store is closed, they’re only selling in-stock Apple laptops, iPads, printers, and ink. Finally the frustration overwhelmed my desire to buy local whenever possible, so I ordered a wireless keyboard from Staples. It’s supposed to arrive tomorrow.

Life won’t return to “normal” any time soon, but at least I’ll have my ALT key back.

Susanna edits for a living, writes to survive, and has two blogs going on WordPress. "From the Seasonally Occupied Territories" is about being a year-round resident of Martha's Vineyard. "Write Through It" is about writing, editing, and how to keep going. She also manages the blogsite for the Women's Committee of We Stand Together / Estamos Todos Juntos, a civic engagement group on Martha's Vineyard.
View all posts by Susanna J. Sturgis →
This entry was posted in dogs, Martha's Vineyard, public life and tagged computers, COVID-19, Cronig's, Edu-Comp, island economics, Malvina Forester, MVY Co-op, SBS, Tam Lin. Bookmark the permalink.