On Paying for Local News

Just before Thanksgiving, the Martha’s Vineyard Times announced that as of January 2, 2020, it would be going to a paid-subscription model. This is a big deal. Founded in 1984, the paper has been delivered free to all Vineyard postal patrons since 1986.

As longtime editor in chief Doug Cabral noted of the decision, “It changed things dramatically. . . . We tried to be the Islander’s newspaper rather than the summer visitor’s newspaper. We worked hard to try to claim that ground and protect it. It was a success. It was a risk. But 1986 is a lot different from 2019.”

It was a daring move, but you have to read between Doug’s lines to get why it was so brilliant. “The summer visitor’s newspaper” is code for the Vineyard Gazette, founded in 1846 and still a classic black-and-white broadsheet printed on the paper’s own press. What the M.V. Times‘s  bold move did, among other things, was make it very attractive to advertisers. For local businesses that could only afford to advertise in one paper, the Times, with its saturation year-round circulation, became the obvious choice. 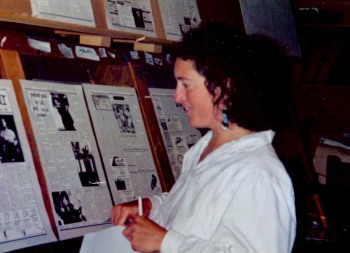 Blast from the past, October 1993: Me checking the boards at the M.V. Times back in the Pleistocene, when all copy was cut with Xacto knives and pasted up with wax. By the end of the decade everything was digital.

The Gazette did not take this lying down. I came on board at the Times in 1987 or 1988, first as a temp typesetter, then as a part-time proofreader, and eventually, in 1991, as the paper’s second-ever features editor. Rivalry reigned during those years. Neither paper would mention the other by name. The Gazette referred to the Times as “the other paper.” The Times referred to the Gazette as “an Edgartown weekly.” I remember at least one full-page house ad in the Gazette that featured an illustration of a trash barrel at the post office brimming full of discarded issues of the Times, implying that this was where your advertising dollars wound up.

Reporters, editors, and photographers from the two papers crossed paths regularly at government meetings and other events. My recollection is that these encounters were mostly amicable though sometimes they did get testy. On the management level, part of the resentment might have had something to do with the fact that Doug Cabral had learned the trade as managing editor of the Gazette and then taken his experience to its up-and-coming competitor.

Going freebie (and at about the same time adopting a tabloid format) was indeed a daring and successful move, but as Doug noted, “1986 is a lot different from 2019.”

It sure is. The newspaper business has been in decline for many years, and as the M.V. Times story cited above notes, “Daily newspapers have lost $30 billion since 2005, and haven’t enjoyed a single positive revenue year since before 2008.” Local weeklies have been hard hit as well. The ubiquity of the internet and especially social media has played a huge role.

So has the popular belief that if you can get it for free, you shouldn’t have to pay for it. The digital age has exacerbated this belief for sure, but it’s firmly rooted in something I observed as a feminist bookseller in the 1980s: almost every time, consumers will go for short-term advantages like convenience and a cheaper price over the longer-term survival of institutions they claim to value. Independent bookstores were almost extinguished by the big chains — which in turn have been almost extinguished by Amazon.

With local and regional newspapers as with independent bookstores and “main street” shops, “you don’t know what you’ve got till it’s gone” (thank you, Joni Mitchell). New York Times columnist David Leonhardt devoted his Dec. 10 newsletter to the significance of local journalism. Studies have shown, he wrote, that “when newspapers shrink or close, voter turnout and civic engagement tend to decline, while political corruption and polarization rise.”

Diligent local reporting can bring important issues to the attention of regional and national news media, whereupon we find out that these issues are not “just local.” (Few issues are!) Good reporting doesn’t come cheap. It demands so much more than doing online searches and quoting public officials. When budgets have to be slashed, it’s the reporters and editors who lose their jobs.

So what’s our way out of this mess? Effective government at all levels depends on a vital press (you can see why I want to avoid the word “free” here!), but “the market” is doing a lousy job of providing it. Writes Leonhardt: “But unlike many other public goods, such as libraries, schools and roads, journalism can’t be funded by the government without violating the spirit of a free press. Philanthropy must fill the void, [John] Thornton says.”

John Thornton is a venture capitalist and a co-founder of the American Journalism Project, in its own words “a new venture philanthropy organization dedicated to local news.” In 2008, he founded the Texas Tribune, a “member-supported, digital-first, nonpartisan media organization.” Elizabeth Green, the AJP’s other co-founder, has an extensive background in journalism. The project’s mission is to encourage “social entrepreneurs in building sustainable, nonproft news organizations where they live” through grants and other forms of support.

I like the idea, and it’s inspiring to read about the innovative work being done by the first round of grant recipients. I do have big reservations about relying on philanthropy, which even in its beneficial, or at least less-harmful, incarnations allots great power to the very wealthy. “Dark money,” after all, when it’s being channeled into think tanks and educational institutions, is a form of philanthropy.

So I wholeheartedly back Leonhardt’s advice: “If your area has a new nonprofit publication you like, support it — by reading it, engaging with it through both praise and criticism and, yes, sending it some money.”

My #1 resolution after the catastrophic 2016 election was to start subscribing to the media I relied on most heavily for solid news and commentary. The roster now includes the Washington Post, The Guardian (both US and UK editions), The American Prospect, The Atlantic, The New Yorker, and Foreign Affairs. I also support the paid version of two podcasts: Preet Bharara and Anne Milgram’s Café Insider (focus on the law) and Deep State Radio (focus on foreign affairs, with plenty of attention to the U.S.). Since my budget is limited, I disable my ad blocker on good sites that I value but use less frequently and don’t pay for.

And now I’m trotting off to subscribe to the Martha’s Vineyard Times, which I’ve received for free since 1986, for which I once worked, and which I depend on for news about local events. For good measure, I’m going to give some money to the Vineyard Gazette, even though they haven’t threatened to cut me off if I don’t.

Susanna edits for a living, writes to survive, and has been preoccupied with electoral politics since 2016. She just started a blog about her vintage T-shirt collection: "The T-Shirt Chronicles." Her other blogs include "From the Seasonally Occupied Territories," about being a year-round resident of Martha's Vineyard, and "Write Through It," about writing, editing, and how to keep going.
View all posts by Susanna J. Sturgis →
This entry was posted in Martha's Vineyard, musing, public life and tagged bookselling, economics, journalism, Martha's Vineyard Times. Bookmark the permalink.

4 Responses to On Paying for Local News