On Martha’s Vineyard, fall foliage is often underwhelming, probably because the landscape is dominated by oaks. Oaks seem to go from green to brown overnight: blink and you missed it. But some years the maples, beetlebungs, birches, and beeches do more than hold their own: the oaks glow in their proximity. This might be such a year. I remember one year, probably a couple decades ago, when driving down Old County Road was like passing through a golden tunnel. This year isn’t quite as breathtaking as my memory, but it’s closer than I’ve seen in years.

This is from the circle at the end of Halcyon Way. I think it’s a beetlebung (tupelo) — the yellow-pink colors remind me of peaches.

Though I rejoice in all the colors, I judge each year by the reds. Outside my west-facing window is a glorious Japanese maple. In my neighbors’ yard are another Japanese maple, a couple of Bradford pears, and a burning bush, most of which I can see from my deck. Some years are better than others, but last year was a complete bust. The burning bush never caught fire. When the Japanese maple shed its leaves in the last weeks of November, they were still mostly green. I still wonder if they were completing a year’s mourning after the 2016 election.

This year the reds are looking good. Here’s some of what I’ve seen in the last few days. The Japanese maple hasn’t reached its peak yet — that generally comes close to the middle of the month — but it’s getting there. 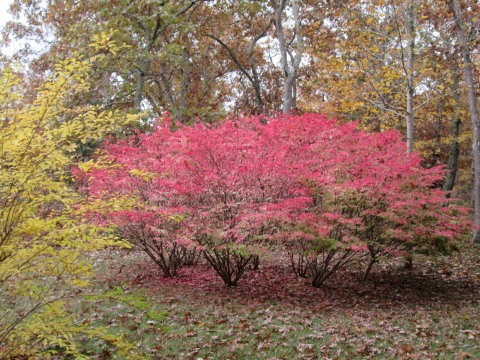 The view from my deck, November 3

The Japanese maple from my window, November 2

The Japanese maple from my window, October 31

The Japanese maple from my window this morning, November 4

Susanna edits for a living, writes to survive, and has two blogs going on WordPress. "From the Seasonally Occupied Territories" is about being a year-round resident of Martha's Vineyard. "Write Through It" is about writing, editing, and how to keep going. She also manages the blogsite for the Women's Committee of We Stand Together / Estamos Todos Juntos, a civic engagement group on Martha's Vineyard.
View all posts by Susanna J. Sturgis →
This entry was posted in home, outdoors and tagged fall, my neighborhood, West Tisbury. Bookmark the permalink.