I’ve been planning an election-round-up blog post but was going to do it closer to election day. Then I was reminded that early voting is already under way: in Massachusetts it started this past Monday and continues through November 2, mostly on weekdays; check your town clerk or other local election official for times and place.

I’ll be voting on THE DAY myself, mainly because in my town voting is easy and even fun. Voting everywhere should be as easy as it is in my town, but it isn’t. On the first day of early voting in Georgia last week, some voters had to wait in line for three hours or more, and if you’ve followed the news you know that this is so not the worst thing going on in Georgia. Georgia is one of two states (the other is Kansas) where the Republican secretary of state — the official in charge of all things electoral — is running for governor and fails to acknowledge that there’s a conflict of interest involved. 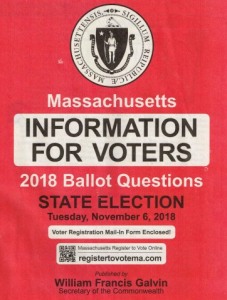 OK, here goes. Some weeks ago Massachusetts residents should have received the secretary of state’s handy-dandy election guide in the mail. If you didn’t or you’ve lost it, you can find it here. It lists the offices that will be on the ballot but not the names of the candidates. The list of candidates is on the secretary of state’s website, but you’ll have to do some scrolling to find the more local races.

FYI, if you live on Martha’s Vineyard, you’re in the 9th Congressional District; the Cape & Islands state senate district; the Barnstable Dukes Nantucket state house of representatives district; and District 1 for the Governor’s Council. For the more local races, like clerk of courts and county commissioner, you’re in Dukes County. Near the bottom of the page is the Martha’s Vineyard Commission. Party affiliation is not given for the MVC candidates because this is a nonpartisan race.

Let’s start at the top of the ticket: governor and lieutenant governor. No, let’s start before we get to the top of the ticket. In fact, if you want to save time, you can skip this entire post and wait for Part 2, which will deal with the three ballot questions and (here’s hoping) be out tomorrow. In what follows, I strongly suggest that you vote Democratic all the way down the ballot. “Vote for the person, not the party” is often taken as a sign of discernment and sagacity. Not this year. This year, when it comes to the GOP, a vote for the Republican is a vote for the party — a vote for the party of voter suppression, attempts to deprive people of access to affordable health care and women of reproductive choice, tax cuts for the rich, inhuman(e) treatment of migrant families, climate-change denial, ongoing rollback of enviromental protections, and the ugliest white-supremacist rhetoric I’ve heard since the heyday of Bull Connor and George Wallace.

In Massachusetts this year, this is not a theoretical issue. Our Republican governor is widely thought to be OK — “pretty good for a Republican” is the phrase I heard often when collecting nomination signatures for Democratic candidates early this year. Trouble is, given the rising swamp of chaos and incompetence in Washington, the states are our first line of defense. For some of the evidence that Gov. Baker has not risen to the occasion, see the handy Sorry, Charlie website. On the “person, not party” thing: Gov. Baker claims to be pro-choice and pro–civil liberties, but he endorsed Geoff Diehl for the U.S. Senate. Diehl ran Trump’s campaign in Massachusetts. If he goes to Washington, is there any reason to believe that he won’t be in Mitch McConnell’s pocket?

Fortunately, we have a great alternative: Jay Gonzalez for governor and Quentin Palfrey for lieutenant governor. I’ve been following the governor’s race since I heard all three Democratic candidates speak at the 2017 state Democratic convention. Jay moved to the head of the pack for me because of his background in health-care access and statewide budget and administration, his commitment to virtually all the issues I care about, and his emphasis on leadership, which is sorely lacking at present. Please vote for these guys, and encourage your friends to do likewise.

I’m wholeheartedly supporting U.S. Senator Elizabeth Warren and Attorney General Maura Healey for re-election. They’ve been on the front lines defending commonwealth and country against the Trump administration, and Healey really has become the “people’s lawyer” she set out to be when first elected in 2014.

With considerably less fervor I’m also backing the re-election bids of William “Bill” Galvin for secretary of state and Bill Keating for U.S. Congress from the 9th Congressional District (MA-09 in political shorthand). The secretary of state’s office could use a good kick in the pants in making voting more accessible, but given what Republican secretaries of state are up to across the country, it’s clear that supporting a Republican is not the answer. Keating has been a lazy-ass congressman, but any improvement is going to come from the Democratic side, not the Republican. Besides, Keating has been showing some signs of life lately, possibly to avoid getting primaried like his colleagues Michael Capuano (MA-07) and Joe Crowley (NY-14). 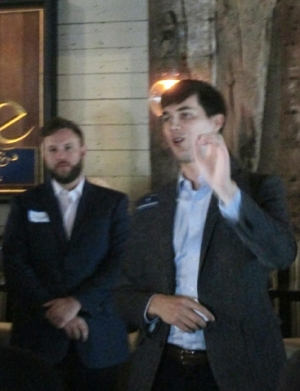 I’m actively campaigning to re-elect our excellent state senator, Julian Cyr. For some reasons why, see my previous blog post, “Vote Like Housing Matters.” Our equally excellent state rep, Dylan Fernandes, is running unopposed, but make sure you mark his name on the ballot anyway.

I confess I know very little about Deborah Goldberg and Suzanne Bump, running for re-election as state treasurer and state auditor, respectively, but they’re Democrats and I haven’t heard anything bad about either of them, so I’m voting for both.

Ditto Democrat Joseph Ferreira, running for re-election to the Governor’s Council from District 1. Every time election day rolled around, my Democratic father would say that the Governor’s Council should be abolished. It still exists, and I’m not sure exactly what they do, but I believe it involves proposing judges for judicial appointments. Upshot is that I’m planning to vote for this guy.

The incumbent district attorney is running unopposed. I haven’t heard good things about him, he’s a Republican, and so I’m leaving that one blank. 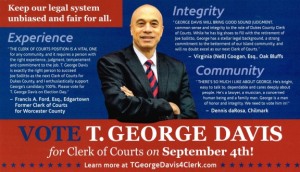 Note: This is from the primary. General election date is Nov. 6! Early voting is currently in progress.

Coming closer to home — to the County of Dukes County, to be specific — T. George Davis is superbly qualified for the many-faceted job of clerk of courts, which is why I’ve been supporting him ever since he threw his hat in the ring. He handily turned back a strong primary challenge. His independent challenger in the general election has no legal experience to speak of and seems to think it’s not necessary. Just about everyone I’ve talked with disagrees. 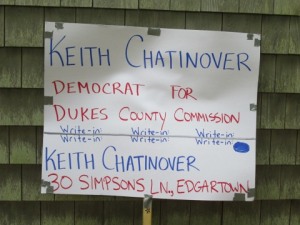 As a write-in primary candidate, Keith earned enough votes with homemade signs and word-of-mouth to get himself on the November ballot.

There are eight candidates running for seven slots on the Dukes County Commission. I don’t pay all that much attention to the commission except when things (figuratively) blow up at the county airport, but I do commend to your attention John Cahill, Gretchen Tucker Underwood, Tristan Israel, Leon Brathwaite, and especially Keith Chatinover. Keith is a young activist who graduated last spring from the M.V. Public Charter School; he’s delayed his college admission till February so he can campaign full-time for a New Jersey congressional candidate. Can he combine an undergraduate course load with serving as a county commissioner? I suspect he can, and that both his coursework and the commission will benefit.

Nine seats are up for grabs on the Martha’s Vineyard Commission, and not only are only nine candidates running, they fit the town distribution that the MVC requires: at least one from each island town, but no more than two from any island town. You can vote for all nine if you want, but you don’t have to. I plan to vote for Christina Brown, Josh Goldstein, Richard Toole, and Jim Vercruysse. (Contrary to popular belief, commissioners are elected at large; in other words, you can vote for candidates from any town no matter what town you live in.) 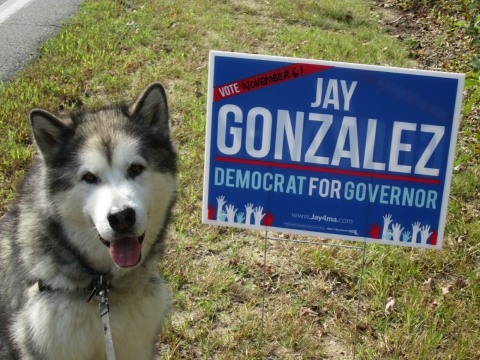 Susanna edits for a living, writes to survive, and has been preoccupied with electoral politics since 2016. She just started a blog about her vintage T-shirt collection: "The T-Shirt Chronicles." Her other blogs include "From the Seasonally Occupied Territories," about being a year-round resident of Martha's Vineyard, and "Write Through It," about writing, editing, and how to keep going.
View all posts by Susanna J. Sturgis →
This entry was posted in public life and tagged Democratic Party, Democrats, Dukes County, Dylan Fernandes, election 2018, Julian Cyr, politics. Bookmark the permalink.