“Infrastructure” comes up in political conversations a lot these days, and with good reason: infrastructure is crucial to the smooth running of any enterprise, but it often gets short shrift when it comes time to budget money for it. Why? Well, one reason is surely that when infrastructure is in good repair, it’s invisible to all but the most perceptive eyes. Only when it starts to fall apart does it become screamingly obvious — at which time the fix is likely to be screamingly, budget-busting expensive.

Another is that our market-based economic system is notoriously shortsighted. Left to its own devices, it’ll ignore long-term consequences for environment and community as long as they’re profitable in the short term. Watching out for the long term, and minimizing the inevitable collateral damage done when all eyes are on the bottom line — this is government’s job. Unfortunately, “government,” from the local to the national level, can be as shortsighted as business, with the result that plenty of the nation’s infrastructure is in pretty bad shape. 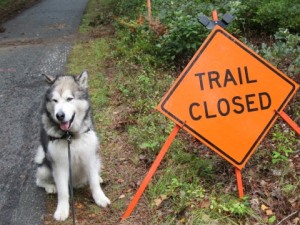 Recently I got to watch infrastructure maintenance in action. It was a relatively small thing: the bike path that circles the state forest had been deteriorating for years, and rumors that repair was imminent had been circulating for almost as long.

What we got instead was patches on the many, many places where underground roots were pushing through the asphalt, creating a bumpy ride for wheeled vehicles.

Finally this fall the whole thing was resurfaced. Since Travvy, my malamute sidekick, and I walk along the stretch of the bike path between Misty Meadows and the West Tisbury School at least once a day, I took pictures of the project as it progressed. Some days Trav got to woo at the backhoes, graders, dump trucks, pickups, and other vehicles involved in the project. Quite a few of the workers paused to greet him in return.

I was impressed by the amount of work, expertise, and care involved in even this relatively simple sort of infrastructure repair. Here’s a little of what Trav and I saw on our morning walks.

Among the early signs that work was about to start were mysterious marks on the asphalt, orange or pink ribbons attached to sticks with numbers written on them, and orange enclosures at irregular intervals alongside the bike path. I’m told that these were to protect endangered plants. Trav is standing next to what was by far the biggest enclosure we saw. I have no idea what endangered plants were being protected. They have to be pretty hardy to survive passings by all the people, dogs, and wildlife that frequent the area.

When backhoes and other vehicles appeared on the bike path, we knew work had started in earnest. 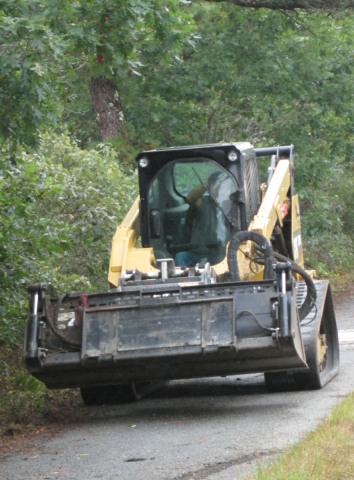 An early step was to dig a trench under each of the many patches on the path. These would be filled with dirt, covered with asphalt, and graded before the final repaving was done. This one bisects the planet Mercury. How, you ask, did Mercury wind up on the bike path?

In the spring of 2016, West Tisbury School fifth graders created the solar system on the bike path, with the sun just off the parking area next to Old County Road. The distances between the painted planets retained the scale of the real ones, though the planetary diameters couldn’t do likewise: each one’s diameter was the width of the path. You can see the sun and the inner planets here and the outer planets here. As the photo on the right makes clear, the crack in the pavement was there when Mercury was painted. Now it’s gone, but Mercury is too. I miss strolling the planets. I hope they’ll come back eventually.

It took several vehicles and quite a few workers to do all the patching. 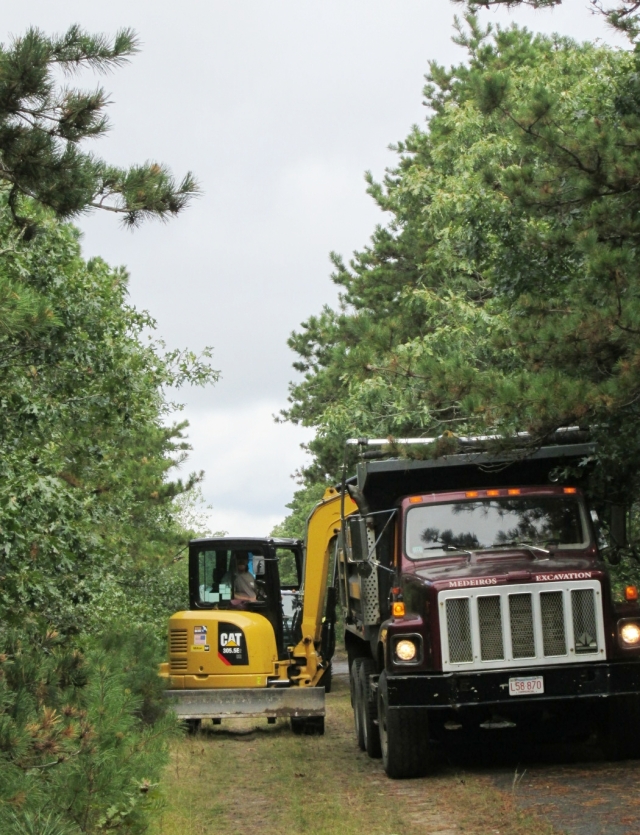 Here is a completed patch. I have zero idea how many patches the entire bike path required, but on the relatively short stretch Trav and I walk regularly, the number was daunting. Now, like the planets, they’re buried under the new pavement. Plenty of what goes into building and maintaining infrastructure is invisible in the finished product.

Immediately after the new surface was laid down, my boot soles tried to stick to it. Footprints remained visible on it.

Before long, though, the asphalt dried, rain washed away the footprints, and the bike path was a pristine black ribbon winding its way through the trees around the edge of the state forest.

The last step was to lay down sand on either side of the path. On one side, the main purpose seemed to be to discourage the scrub growth from encroaching on the pavement. On the other . . . Well, that edge dropped off rather steeply; the drop was only three or four inches, but it was enough to make me slip off the path if I wasn’t watching my step. The sandy border smoothed out the drop, and for a bonus, it now reveals where deer and other critters have crossed the bike path or even run alongside it.

Here’s the drop I almost twisted my ankle on . . .

. . . and here’s a view of what it looks like now, from the parking area across from the West Tisbury School.

Susanna edits for a living, writes to survive, and has been preoccupied with electoral politics since 2016. She just started a blog about her vintage T-shirt collection: "The T-Shirt Chronicles." Her other blogs include "From the Seasonally Occupied Territories," about being a year-round resident of Martha's Vineyard, and "Write Through It," about writing, editing, and how to keep going.
View all posts by Susanna J. Sturgis →
This entry was posted in outdoors, public life, technology and tagged my neighborhood, Travvy, walking, West Tisbury, West Tisbury School. Bookmark the permalink.

4 Responses to Repairing the Bike Path