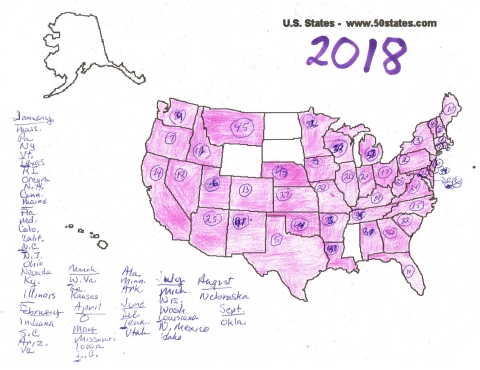 Two good catches for September, one at the beginning of the month (Oklahoma) and one at the end (Montana). After scanning my updated map, I realized I had colored Montana in but not added it to the list. That’s now been fixed, but I’m too lazy to scan it again.

One afternoon toward the end of the month I was driving from Oak Bluffs to Vineyard Haven. On a hunch I turned left into the hospital parking lot, where exotic out-of-state plates often hang out thanks in part to the travel nurses and doctors who augment the staff during the busy season. I parked, strolled around — and there it was: Montana.

The busy season is passing, but I intend to play my hunches from now to the end of the year.

Susanna edits for a living, writes to survive, and has two blogs going on WordPress. "From the Seasonally Occupied Territories" is about being a year-round resident of Martha's Vineyard. "Write Through It" is about writing, editing, and how to keep going. She also manages the blogsite for the Women's Committee of We Stand Together / Estamos Todos Juntos, a civic engagement group on Martha's Vineyard.
View all posts by Susanna J. Sturgis →
This entry was posted in license plates and tagged license plates, M.V. Hospital. Bookmark the permalink.