Way back in the spring I wondered whose bright idea it was to schedule the primary for the day after Labor Day. Good grief, thought I, we’ll still be catatonic from summer and who has time to think about politics when you’re dodging tour buses, explaining how to get from here to there, working two jobs, looking after kids who’ve been sprung from school, etc., etc., etc.

Point taken, but having become something of a political wonk, I’ve spent a fair amount of time this summer going to candidates’ fundraisers, meeting candidates, reading up on candidates, and doing other wonky things, so I’m going to pass some of what I know on to you. As usual, take what you like and leave the rest. 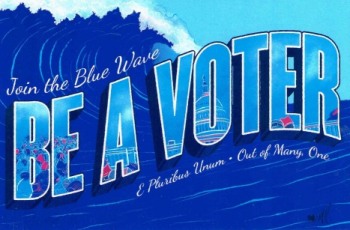 Postcard by Mary Hawkins of Mary Likes Postcards. Check her out on Etsy!

For the TL:DR folks: The Massachusetts primary is next Tuesday, September 4. There are several important races on the Democratic side, and some excellent candidates running. Vote, goddammit!

Jay Gonzalez, hands down. I’ve been following the governor’s race since the 2017 state Democratic convention. What struck me about the (at the time) three candidates was that they weren’t far apart on the key issues: access to health care, leveling the economic playing field, protecting the environment and dealing with climate change, etc. So in my research I paid particular attention to each candidate’s experience: Did he have what it will take to actually achieve these goals? Jay’s got it. As Deval Patrick’s secretary of administration and finance, he managed the commonwealth through the recession of the late 2000s and helped Massachusetts win its highest bond ratings in history. (This is important because it makes it cheaper to borrow money for important projects. Btw, our rating has slipped noticeably under the current Republican governor.) As a former health insurance exec, he led the way in expanding health care access to low-income families and creating new jobs. Jay also focuses strongly on early childhood education and increasing child-care support for working families. I could go on, but if you want to know more, check out Jay’s website.

You know what? We have two excellent candidates here, Jimmy Tingle and Quentin Palfrey, and I’m still going back and forth. Their platforms aren’t all that different, but they would bring different strengths to the job. Quentin has the more conventional political background — he worked in the Obama White House and in the Massachusetts attorney general’s office — but Jimmy, as longtime stand-up comic and commentator, is an ace communicator at a time when government at all levels desperately needs people who can get out there and listen. I voted for Jimmy at the state Democratic convention in part because he spoke so eloquently of his own recovery experience (you can listen to the speech on his website) and he brings so much gut-level wisdom to dealing with the current opioid epidemic — and all the other challenges we’re facing right now. My head says “Quentin” and my heart says “Jimmy.” I trust that by next Tuesday they will have worked it out.

No hemming and hawing here: I’m supporting Josh Zakim. One major lesson I’ve learned as a newbie political wonk is the importance of secretaries of state. In most states, they’re the ones who oversee elections. As of April 2018, there are only 11 Democratic secretaries of state, and all the swing-state secretaries of state are Republicans. This has had terrible consequences for voter suppression and access to the ballot. (For more info, visit iVote’s website. They’re doing great work on this front.)

Massachusetts currently has a Democratic secretary of state, but he’s been in office a long time and the state is lagging behind in making voting easier. (Writing postcards to voters, I’ve learned that some red states are doing a better job with this than blue Massachusetts.) Consider: When a lower-court judge ruled that our state’s requirement that you have to register 20 days before an election was unconstitutional, our current secretary of state challenged it in court — and was upheld by the state supreme court. Fifteen states and D.C. offer same-day registration — why can’t we?

Josh is committed to expanding access to the ballot and to upgrading the technology to make this easy for local election officials. He’ll work to increase voter turnout in all elections. As secretary of state he’ll play a more active role in supporting the right to vote nationally — the way our attorney general, Maura Healey, has on legal issues.

Driving around the island recently you had to have noticed that there are many, many more yard signs out there for candidates in the local races than in the statewide ones. If you, like me, have minimal contact with the courthouse, you may have wondered WTF the clerk of courts and the register of probate do. One of the many upsides of being a novice political wonk is learning this stuff.

The clerk of courts maintains court records (financial, legal, etc.), adjudicates in small claims court, educates prospective jurors, hears appeals on speeding and parking tickets, and more. Doing the job well requires a range of abilities plus the right temperament and the ability to listen. This is why I join a whole bunch of people who know more than I do in supporting George Davis. George has it all — plus he plays a mean guitar.

I’m not 100% decided on this one, but I’m leaning toward Daphne Devries. She’s been acting register of probate since her predecessor retired in June 2017; before that, she was the deputy assistant register. She knows the job, loves it, and from what I hear is good at it. The register of probate’s office does much more than keep records related to divorce, child custody, wills, and so on. Day in, day out, it also helps people negotiate these complicated and often stressful matters — which requires the ability to listen carefully and sympathetically and communicate clearly. For more about the job and the candidates, see “Two Vie for Register of Probate” in last week’s Vineyard Gazette.

I’m also enthusiastically supporting for re-election State Senator Julian Cyr, Attorney General Maura Healey, and U.S. Senator Elizabeth Warren. They have no primary opponents (it seems we Democrats know when we’ve got great people in office!), but they will have competition in the November 6 general election. Julian in particular faces a tough race against a well-funded GOP opponent.

Our equally wonderful state rep, Dylan Fernandes, has no opponents in either the primary or the general, so when he’s not busy on Beacon Hill or in the district, he can sometimes be found campaigning for other progressive Democrats, including Julian. (Have I said lately that we are so lucky in our elected representatives??)

Susanna edits for a living, writes to survive, and has been preoccupied with electoral politics since 2016. She just started a blog about her vintage T-shirt collection: "The T-Shirt Chronicles." Her other blogs include "From the Seasonally Occupied Territories," about being a year-round resident of Martha's Vineyard, and "Write Through It," about writing, editing, and how to keep going.
View all posts by Susanna J. Sturgis →
This entry was posted in public life and tagged Democratic Party, Democrats, election 2018, politics, voting. Bookmark the permalink.

5 Responses to Of Primary Importance