For more than 40 years I’ve made virtually all my own bread. For the last almost 10, I’ve used sourdough almost exclusively.

Today Alabama voters go to the polls to elect a new U.S. senator.

There’s a connection between these two things. Bear with me: read on. 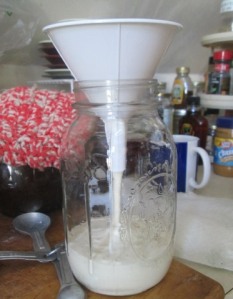 Before you mix up the batter, pour half the doubled starter back into its jar.

My sourdough starter resides in a mason jar in my fridge. Before I make bread, I double it: pour the contents of the jar into my big bread bowl, whisk in about a cup of warm water and about a cup and a half of unbleached white flour, then leave it out all night to ferment. In the morning, a cup goes back into the mason jar and the rest stays in the bowl to raise the loaves-to-be.

Early last spring I committed a Big Stupid: I started adding ingredients to the starter before I’d doubled it. (You can read about it here.) In other words, my starter was now batter and I needed a new starter. I’d started starter from scratch before so I knew I could do it, but it takes several days even if it works the first time, and it takes new starter a while to become as tangy as the old.

Last month I did it again, but this time was different. Between Big Stupid #1 and Big Stupid #2, I’d doubled my starter and given a cup to each of two neighbors. Wonder of wonders, both of them had kept it going, and were using it in ways I hadn’t imagined (sourdough focaccia!).

Both offered to double it and give me a cup back. I took David up on his offer because Trav and I walk by his house at least once a day, whereas Tom lives maybe three miles up the road, which would have meant getting in the car.

At the moment I can’t think of a better example of “giving is receiving.” Moral of story: If you’ve got a sourdough starter going and you haven’t done it already, offer a cup to a bread-baking neighbor.

Now back to the Alabama U.S. Senate election. On November 12, six Vineyard women, including me, headed off to the statewide Indivisible Massachusetts conference in Worcester. It was wonderful: inspiring, energizing, and practical. Five of us car-pooled together, so the trip to and from was filled with great conversation and lots of laughter. 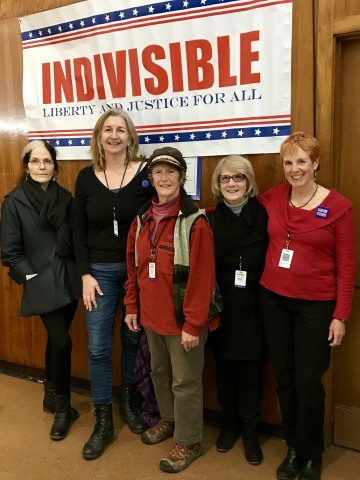 The Vineyard contingent. From left: Lorraine Parish, Holly MacKenzie, me, Margaret Emerson, and Kathy Laskowski. Missing: Carla Cooper, who had to leave early because she didn’t have a ferry reservation.

A few days later the bunch of us got together to write postcards to Alabama Democrats supporting Doug Jones for the U.S. Senate seat left vacant when its previous occupant was appointed U.S. attorney general.

The impetus came from Indivisible. The nationwide postcard-writing campaign was organized by Postcards to Voters, an outfit that I was previously unaware of and am now seriously impressed by. Doug Jones’s was their 32nd campaign, and probably one of their largest. (They’re now up to 34.)

The Jones campaign provided key talking points that had to be incorporated into each postcard (Doug Jones is running as a Democrat for the U.S. Senate, the election is on Tuesday, Dec. 12, and Doug has devoted his life to fighting for liberty and justice for all). Then you could pick and choose from various options, such as Jones’s support for health care access and quality education.

First time volunteers are asked to submit a draft postcard, and when it’s approved, you’re sent as many addresses as you think you can do in three days. Names are not included, so you use a generic addressee. My faves were Most Valuable Voter and Very Important Voter. You don’t sign your own full name either; initials or first-name only is suggested. The idea is to protect both sender and recipient from invasion of privacy.

I got into the postcard thing. After our postcard-writing party, I kept going. By the mail-out deadline a week ago, I’d written and mailed 110 postcards. I bought postcard paper at EduComp and printed my own:

I’ve only passed through Alabama once in my life, in 1971, when I was among hundreds of college students who went to Mississippi as poll watchers for Charles Evers, brother of Medgar and the first black person to run for statewide office since Reconstruction. My main memory is of a postcard in the rack at a bus station titled “Beautiful Negro Homes,” which immediately sold out to the other students on my bus. So my mental map of Alabama was limited to Montgomery, Selma, and Birmingham.

Some of my addresses were in Montgomery, but all the rest of the towns I had to look up: Opelika (I had no fewer than 24 addresses in Opelika), which isn’t far from the Georgia line; Florence, in the northern part of the state across the Tennessee River from Muscle Shoals (which I had heard of); Monroeville, between Frisco City and Beatrice on Route 21, where I also had addresses . . . I only had one address in Lower Peach Tree, but I’m still wondering what happened to Upper Peach Tree, which isn’t on the map.

Writing postcards to places I’ve never been and can’t visualize put them on my map. For sure I know Alabama geography better than I did before, and along with hundreds of thousands of others I’m biting my fingernails waiting for today’s election results.

Turns out I’ve got a new neighbor here on the Vineyard too. I knew Lorraine Parish, one of my fellow travelers on the way to the Indivisible conference, by reputation: she’s a fashion designer who runs a highly visible shop on State Road in Vineyard Haven. What I didn’t know is that she grew up in Alabama. One of the many, many people who’ve been fired up politically since the November 2016 election, she returned to Alabama at the end of last week to stay with high school friends and work on the ground the last few days of the Jones campaign.

So I’ve been remembering and relearning that political organizing really is about personal connections, and that passing it on is a good way to get a lot back.

Susanna edits for a living, writes to survive, and has been preoccupied with electoral politics since 2016. She just started a blog about her vintage T-shirt collection: "The T-Shirt Chronicles." Her other blogs include "From the Seasonally Occupied Territories," about being a year-round resident of Martha's Vineyard, and "Write Through It," about writing, editing, and how to keep going.
View all posts by Susanna J. Sturgis →
This entry was posted in musing, public life and tagged bread, Democratic Party, my neighborhood, politics. Bookmark the permalink.