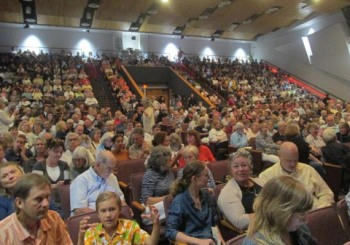 The Performing Arts Center was filled to capacity when Sen. Warren came to speak.

When Senator Elizabeth Warren came to the Vineyard for a town hall last month (see “The Line, the Hall, and the Senator” for details), an estimated 1,000 people filled a hall whose official capacity is about 800. When my four friends and I made it in, the orchestra section of the Performing Arts Center was nearly full. We spotted a couple of rows over on the right where there seemed to be four or five empty seats in a row. I went over to check them out. RESERVED said a sign at the end of those particular rows and several others.

Surprise, surprise, I snarked to myself. The insiders get special treatment.

But several days earlier I’d contacted the staffer from Warren’s office who was point person for the event. A friend of mine really wants to come, I told him, but she’s not steady on her feet and can’t wait in line. Is there some way she can get in?

Have her get there early and check in at the door, he told me. I passed the word to my friend and all unfolded as planned. Some 200 people didn’t manage to get into the hall itself — chairs were set up in the lobby so they could listen — and another 150 or so sat outside on the grass. My friend and her daughter had great seats up front, at least in part because as an officer of the Democratic Council of Martha’s Vineyard (aka the MV Dems) I knew who to contact and had the chutzpah to do it.

It happened again yesterday. Summer brings plenty of big-ticket events to Martha’s Vineyard, including fundraisers for candidates and political organizations, virtually all of them liberal. These take place on the same island I live on but when the lowest price of admission is generally $250 or more they might as well be on another planet.

At this particular event, Rep. John Lewis was receiving the Guardian of Democracy award from iVote, a national organization founded in 2014 to “secure and expand access to voting.” The venue was the waterfront estate of Richard and Nancy Friedman, which was the “summer White House” when the First Family vacationed here during the Clinton administration.

Needless to say I’d never been there. I had to consult Google Maps to be sure I wouldn’t get lost on the way. But I got to go because a sister officer in the MV Dems was volunteering on site and she got to invite her friends. Her friends, like me, are the sorts who will spread the word about iVote through our various networks even if we can’t contribute much to the treasury.

Insiders do get special treatment, but the line between insider and outsider is often more permeable than it looks from the outside.

No, I’m not minimizing the insider-outsider split. I’ve yet to encounter an organization or a movement that doesn’t have one, and some insiders are so far inside that they’re several degrees removed from the people affected by their decisions. Insiders are almost never the best authority on why their organization is dwindling in numbers. And when the outsiders try to make themselves heard, their letters, phone calls, and emails are ignored. They’re even thrown out of the office or dumped out of their wheelchairs.

Last year’s presidential election was full of rhetoric about “the establishment” and “the swamp.” The rhetoric on the left of center is riddled with references to Wall Street, Big Pharma, Big Oil, Dark Money, etc., etc., all of which frame the opposition as big hulking insider monoliths. The rhetoric on the right is similar, only the enemies have different names. In the process we frame ourselves as helpless unless we throw in behind a savior who promises to deliver us from evil. When the savior doesn’t deliver — well, it can get ugly.

The good news is that since the disastrous election plenty of us are learning that taking action makes us more powerful. We demystify government by learning how things work and how we can better influence the outcomes.

A month ago Maura Healey, the Massachusetts attorney general, spoke at an MV Dems meeting. She talked about what her office does, and about what the Democratic attorneys general across the country are doing to counter the many excesses of the current administration. Ever since people have been telling me how encouraged and hopeful they felt afterwards.

We may not be insiders, but we’re probably not as far outside as we think we are.

Susanna edits for a living, writes to survive, and has been preoccupied with electoral politics since 2016. She just started a blog about her vintage T-shirt collection: "The T-Shirt Chronicles." Her other blogs include "From the Seasonally Occupied Territories," about being a year-round resident of Martha's Vineyard, and "Write Through It," about writing, editing, and how to keep going.
View all posts by Susanna J. Sturgis →
This entry was posted in musing, public life and tagged election 2016, Maura Healey, politics, psychic map, summer, summer people. Bookmark the permalink.