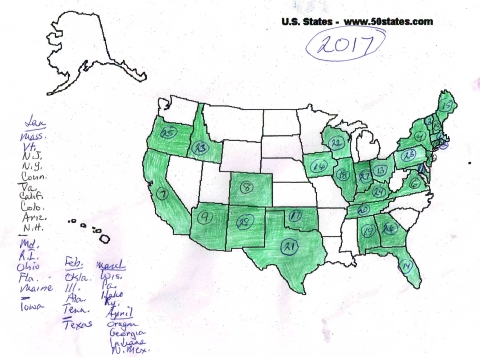 A pretty good month, all in all: Oregon, Georgia, Indiana, and New Mexico. The gaps are filling in. Now I’m on the lookout for Washington state and the Carolinas, all of which are running late this year. Delaware is often the last East Coast state to show up, but now’s the time for them too.

The other day I got all excited because I was behind a pickup with Oklahoma plates at the four-way near the Oak Bluffs fire station. When I got home, I realized Oklahoma was already on the map: my first sighting was on a rental truck parked in a loading zone in Edgartown.

Rental trucks never seem quite legit because they’re usually here by coincidence — the driver might have rented the vehicle in New York or New Jersey and have no connection whatever to the state whose plate the truck is sporting. I count them anyway, but seeing a relatively scarce plate on a bona fide personal vehicle makes it real.

I just noticed that once again I’ve omitted to put D.C. on the map, though I’ve seen more than one D.C. plate in the last few months. I’ll add D.C. in May.